One of the surprises that surfaced at the US Patent and Trademark Office this morning, was a granted patent for a new Magic Glove System from Apple. Being that Apple loves the word Magic,  why not precast it as such right out of the gate. The proposed high tactility glove system isn't as magical as a projection-type of touch panel that was revealed in November. Then again, patents are about concepts and Apple is clearly working on several solutions relating to working with an iPhone in colder weather. Perhaps we'll see one of these solutions come to market sometime in the next year or two.

This invention is directed to a glove system including an inner liner and an outer liner operative to transmit user inputs to the input mechanism of an electronic device. 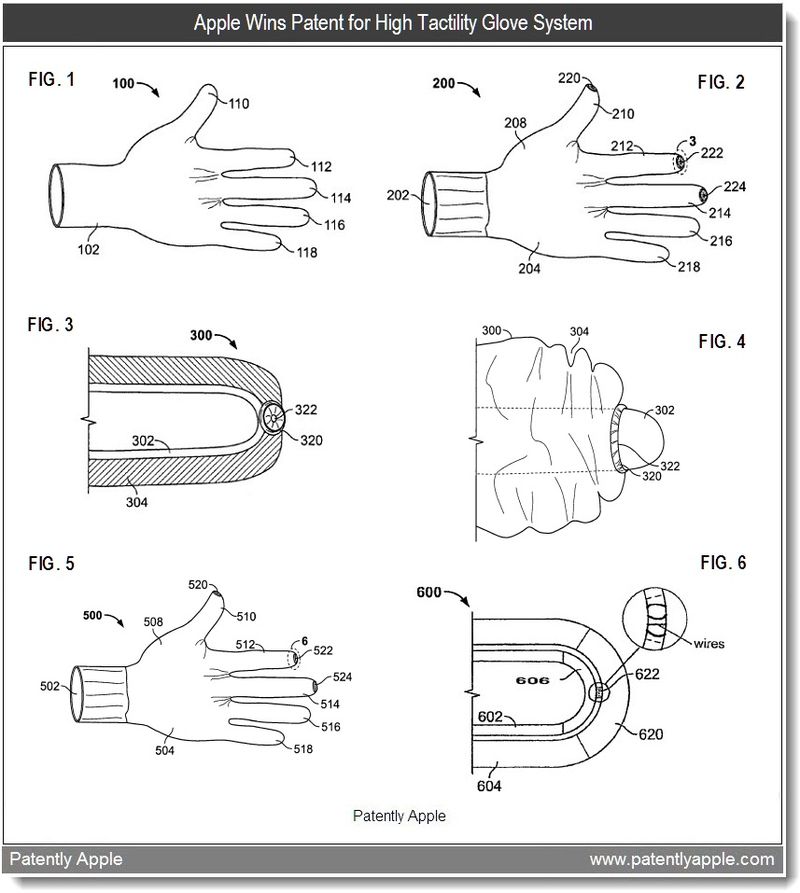 A glove that includes an inner liner and an outer shell may be provided. The liner may include a palm portion and one or more fingers operative to receive a user's hand. The liner may be constructed such that the user receives tactile feedback when the user manipulates the input mechanism of an electronic device while wearing the liner.

The inner liner may be manufactured from any suitable material, including materials with properties similar to human skin. For example, the inner liner may be manufactured from a material that has a low thermal conductivity, electrical resistivity similar to human skin, "anti-sticky" attributes, or any other suitable property. In some embodiments, the material for the liner, the outer shell, or both may be selected to closely mimic the tactile effect of manipulating the electronic device using bare fingertips.

Low Thermal Conductivity: In some embodiments, the liner may be constructed from a material having low thermal conductivity. For example, the liner may be constructed from a material that retains heat around the user's hand and does not allow heat generated to dissipate when the liner is exposed. Suitable materials may include, for example, cork, rubber, polystyrene, silica aerogel, plastic, polymers, or any other suitable material. In some embodiments, the material may be provided in the form of a fabric to provide high tactile feedback.

The Outer Shell: The outer shell 204 may be constructed from any suitable material. For example, the material of the outer shell may have any suitable property including, for example, water resistant, water proof, insulating (e.g., low thermal conductivity), flexible, wind resistant, or any other suitable property. Such materials may include, for example, latex, vinyl, rubber, cloth, wool, leather, neoprene, nylon, kevlar, plastic, polymers (e.g., Gore-Tex), Teflon, or any other suitable material.

Calendar: Apple's engineering team in France was credited for a granted patent this morning relating to iCal which was originally filed for in Q2 2004. Some patents take more time than others through the USPTO system.

Docking Stations: Apple has been granted a design patent for their iPad dock. A related granted patent has surfaced, titled "Communication between an Accessory and a Media Player with Multiple Lingoes and Lingo version information." Apple's patent covers an interface and protocol allowing a media player to communicate with external accessories over a transport link. The protocol includes a core protocol functionality and a number of lingoes. Examples of accessory lingoes include a microphone lingo, a simple remote lingo, a display lingo, an RF transmitter ling and an extended lingo.