Late last week, the US Patent & Trademark Office published Apple's latest important trademark/service mark application update for "Apple" under application 85120231. Apple had originally filed a service mark application that would cover Apple, the brand itself, for social networking services one day prior to Ping being introduced. Yesterday the USPTO registered a Trademark "Snapshot Amendment & Mail Processing Stylesheet" form reflecting the changes that Apple was requested to make. Apple obviously regards social networking as an important piece of the mobile device revolution and their brand name being associated with this movement is crucial.

In Apple's official response to the Patent and Trademark's Office's "Response to Office Action" notice, we're able to see in the evidence section of that form, that Apple has provided the USPTO with a PDF that is presented below in full. 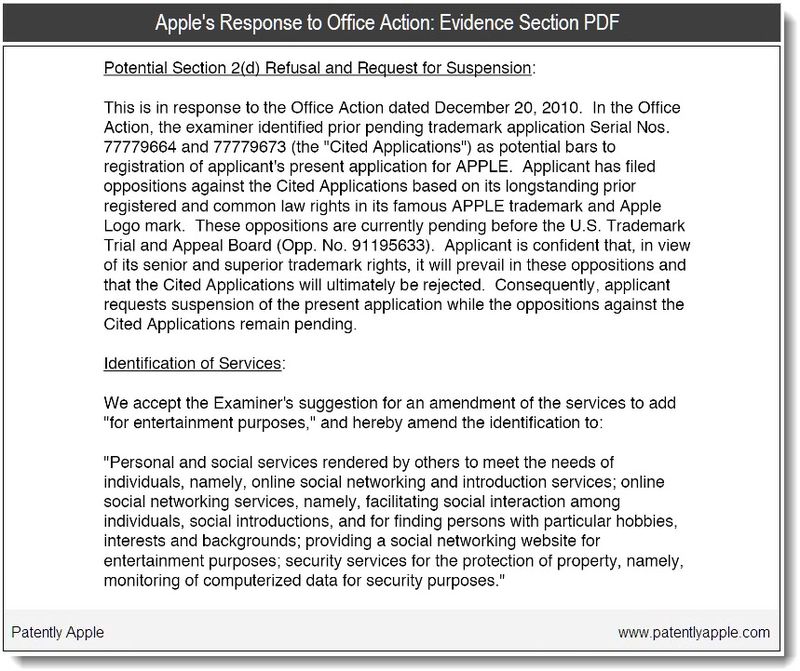 An Amendment was filed to add the Required Clarification Update

An amendment was filed pertaining to Apple's Service Mark International Class 045. Apple was asked to add the descriptive text as noted below in red:

This moves Apple one step closer to having Apple, the brand, registered as covering matters pertaining to social networking beyond just Ping. Whether that will actually translate into anything meaningful is unknown at this time. Steve Jobs broke bread with Facebook's Zuckerberg in October and whatever Apple has up their sleeve in this regard may take months or years to unfold. For now, Apple has the foundational building blocks for their social networking roadmap coming together nicely.