While Apple is statistically the leading mobile devices company in the world today, the company has always been known for being a consumer friendly company in terms of selling easy to use hardware and software. In a patent application published yesterday by the USPTO, Apple is once again attempting to make the average consumer's life a little easier by inventing a new user friendly connector system. Some hardware systems have a plethora of ports and trying to mate the right connector to the right port isn't always easy for the non-geek. Apple's new system contemplates using various schemes to simplify that process by including magnetic connectors, haptic actuators that vibrate and other unique approaches to make setting up a new device, friendly. Sometimes simple is cool.

The system may use either that same sensor or another one to determine what type of connector is present, and to identify one or more available ports that are compatible with the type of connector. In an example, the computing system uses a magnetometer, a Hall Effect sensor, or another sensor adapted to measure a magnetic field to detect a field strength and orientation related to a magnet embedded within the external connector. The embedded magnet is an electromagnet or a bar magnet, for example. In another example, the computing system uses a radio frequency identifier (RFID) reader and a corresponding RFID tag embedded in the connector to detect a connector type. In some examples, the RFID reader uses strength and orientation information related to the RFID signal to determine the position and/or orientation of the connector. In yet another example, both magnetic fields and radio frequency communications are used. In some examples, the RFID sensing system will be used to identify the proximity of a connector, and then another sensing system, such as the indicated magnetic-based system will be used to provide position and orientation information.

In some examples, the user-detectable signal includes illumination of selected light emitting diodes (LEDs), presentation of audio signals, presentation of visual information (such as a graphical depiction), tactile signals, or any combination thereof to assist the user.

Apple's patent uses the Mac Mini as the target device for this presentation. The Mac Mini is seen below as device 102 connecting to a Cinema Display noted as device 100.

The Mac Mini includes circuitry to identify a connector such as a USB flash memory device noted as number 135 including the connector, noted as 134. The Mac Mini provides a number of differing ports such as an Ethernet port (116), a FireWire port, a DisplayPort (120), a Mini-DVI port (122) and so forth.

To a newbie or average consumer, connecting devices together can be a confusing and frustrating task. Apple wants to remove that frustration by making it easier to mate connectors to ports. I've added a number of arrows and notes to Apple's FIG. 1 shown below to help you better decipher the system's methodologies. 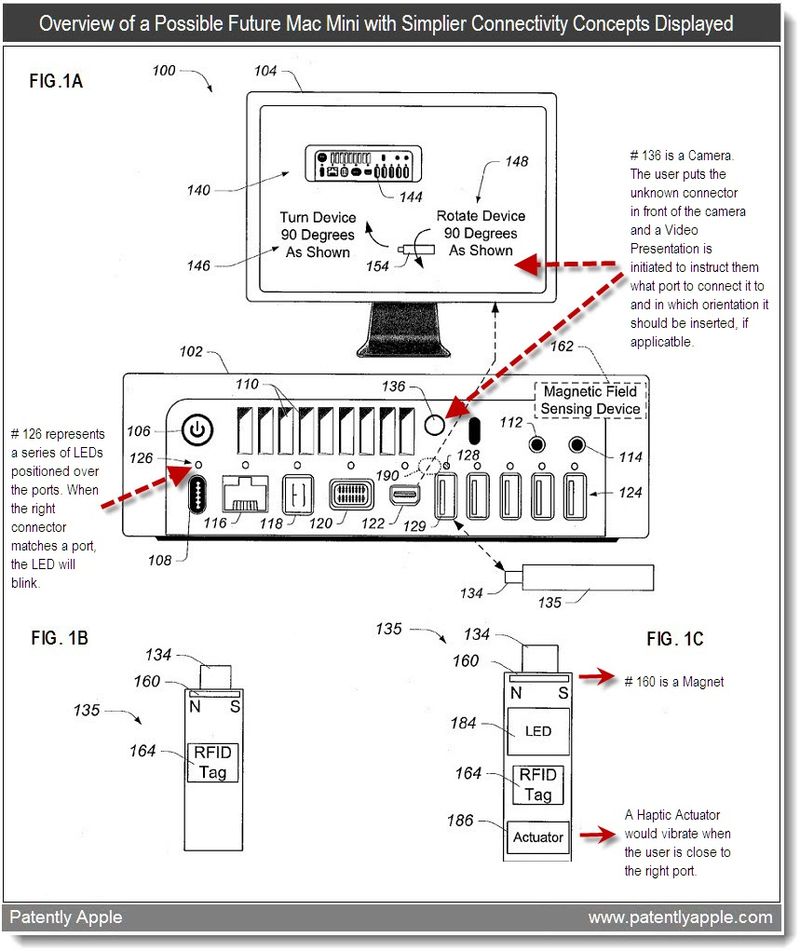 Via a Camera/Presentation: One of the ideas is to first connect a future Mac Mini to a display. Once that's accomplished, Apple is considering adding a camera lens to the back of the Mac Mini (or other future device), shown in FIG 1A as # 136, just above the first USB ports. The idea, believe it or not, is to show a connector that you wish to connect and can't figure out and the camera will capture the image of the connector and initiate a presentation video that you see above playing on the display. It would walk the consumer through how to connect that particular connector to the port and in which orientation.

Magnetic Field Sensing: The Mac Mini could also include one or more sensors to detect the proximity of an external device, such as USB flash drive 135, before it's coupled to one of the plurality of USB ports (124) on the Mac Mini. In this example, the Mac Mini could determine a relative position and preferably also orientation of the connection to be made.

In one example, the Mac Mini includes a radio frequency identifier (RFID) transceiver and one or more associated antennas (not depicted) to communicate with an RFID tag embedded in an external device, in this example, RFID tag 164 within external device 135.

Simple LED Sensing: In some examples, it may be useful to provide LEDs, noted as patent point # 126, with distinct colors and/or shapes dependent upon the type of port with which a particular LED is associated. Additionally, multiple LEDs, for example of different colors, might be used proximate a port, such that approaching the port with the correct external device and/or the correct orientation of the device could be used to actuate the different LEDs to provide a color coded signal of the attempted connection process to the user.

Audible Indicators: In another particular example, instead of or in addition to the visual representations, it may be desirable to provide an audible indicator related to at least one of the position and orientation of connector 134 relative to USB port 129.

Vibrations via Haptics: In still another example, external device 135 includes light emitting diode (LED) 184 and a haptic actuator 186. The LED will be used to provide visual feedback to a user. For example, The LED may be turned on and off to indicate proximity and/or orientation relative to the port. For example, frequency of illumination or brightness of the LED will be varied as external the device is moved closer to the port. In an alternative example, the LED flashes on and remains illuminated when a correct orientation of the relative external device is achieved and maintained relative to the port. 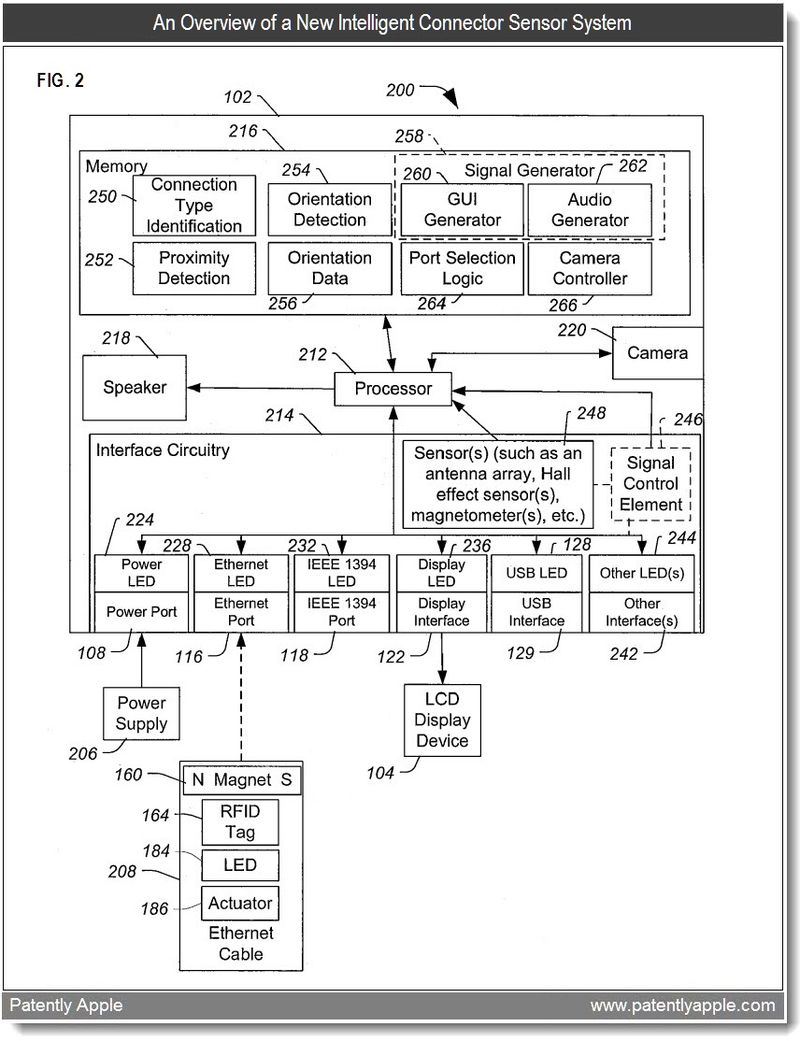 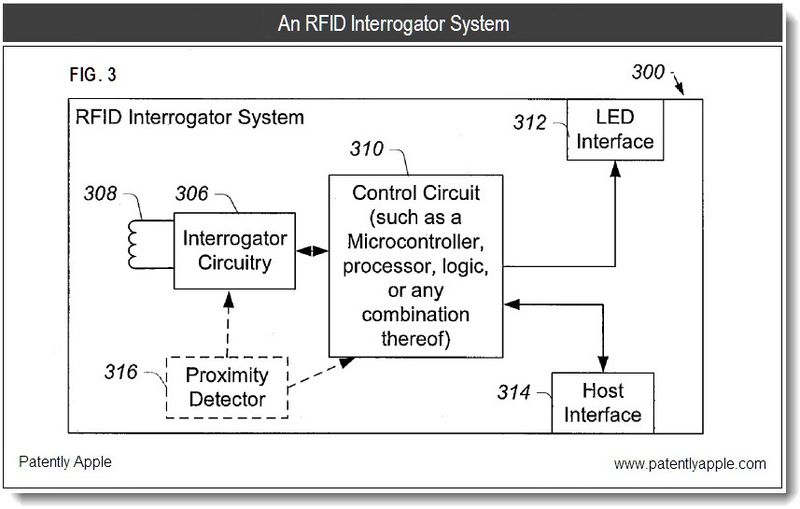 The RFID interrogator system includes an antenna 308 coupled to interrogator circuitry 306, which includes transceiver circuitry. The Interrogator circuitry is coupled to a control circuit 310, such as a microcontroller. In an alternative embodiment, in place of a dedicated microcontroller as pictured, the processor of a host system (processor 212 of FIG. 2) may be utilized to provide the control functionality. The control circuit is coupled to the host interface, which can be coupled to a host system via a communications link (serial, USB, or otherwise) to communicate with the host system.

You could find more information about this RFID interrogator system and other aspects of this patent under application 20110012727 which was originally filed in Q3 2009. The engineers given credit for Apple's patent includes Aleksandar Pance, David Simon, Michael Sinclair and Bret Bilbrey.

Imagine the connector could literally "turn itself around" in your hand according to polarity of magnetic fields. For USBs this would be awesome.

I guess the idea is that some people actually look at the back of a system when they're setting it up. That's when there's the most frustration for newbies. Though having optional methods is welcomed. Some day, wireless USB and other such technologies will eliminate this process anyways. Until then, this is at least a move forward.

If I'm reaching around the back of a iMac to plug in a FireWire or mini DisplayPort connection, having a light back there when I get close won't help as I can't see the light either. The magnetic aspect is nice to make sure I've oriented the connector the right way.