Yesterday, The US Patent and Trademark Office officially published a series of 12 newly granted patents for Apple, and one of them caught my curiosity. The patent is for updatable menu items. It's a sleeper feature that packs a lot of punch. Whether this patent's potential is ever unlocked is in the air at the moment. It could very well remain a mundane feature or Apple could decide to unplug it. I'm hoping for the latter.

Apple's invention generally relates to updatable menu items within a graphical user interface. Embodiments of the present invention relate to updatable menu items within a graphical user interface (GUI). In one embodiment, as a user selects menu items from within a menu, such as, for example a pull-down menu or a pop-up menu or a contextual menu, secondary text (text apart from the title of the menu item) associated with the selected menu item scrolls to present useful information pertaining to the selected menu item. Thus, a user may quickly be presented with essential information for a menu item, without having to actually initiate a command associated with the menu item. In another embodiment, the content of the secondary text is generated in real time, and is not merely a presentation of predetermined information, and this secondary text is displayed within the same GUI region which is used to activate the menu item.

Apple's patent FIG. 2A illustrates an embodiment of a pull-down menu 202 which describes user time quotas for a multi-user computing system. It will be appreciated that although aspects of the present invention are described with reference to a GUI displaying user time quotas, such reference is merely by way of example, and embodiments of the present invention are not to be construed as being limited to such an application.

Updatable Regions: The State of the Menu

Apple's patent FIG. 2B illustrates the state of the menu (202) subsequent to a brief period after the state illustrated in FIG. 2A, in which the menu item (212) has remained selected. The text within the updatable region 222 has shifted to the left as compared to the state of FIG. 2A, as a result of the continuous right-to-left scrolling of the content of region.

In one embodiment, once the text has scrolled completely out of the updatable region, it may loop by reappearing again at right of the updatable region and repeating its right-to-left scrolling. If the informational content of the text has changed since the last scroll cycle (e.g. the time remaining has changed from "1 hour 20 minutes" to "1 hour 19 minutes"), the text may be updated when scrolled again. 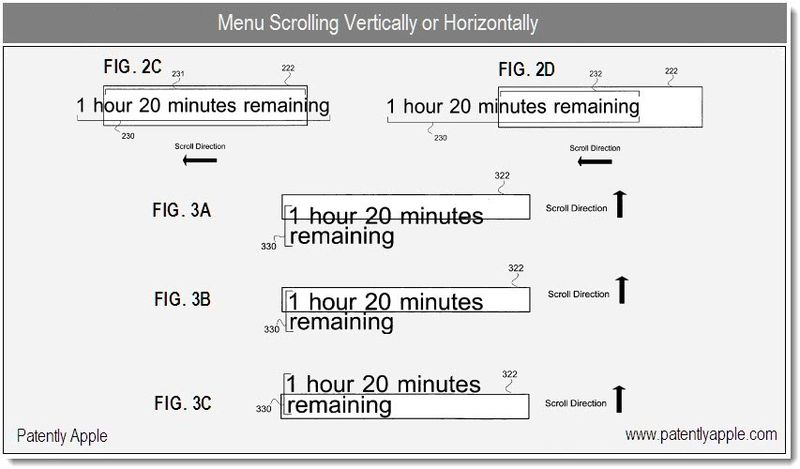 All Kinds of Menus Apply

Although embodiments of the present invention are described primarily with respect to pull-down menus, it will be appreciated that embodiments of the invention may be implemented within other types of graphical user interface menus, such as, but not limited to, menus in which options are highlighted by a bar that is moved from one menu item to another, pop-up menus (e.g. a menu activated by clicking an on-screen button), contextual menus (a menu that appears temporarily when a mouse button is right clicked on a selection; once a selection is made from a contextual menu, the menu usually disappears), cascading menus (a submenu that opens when a choice from another menu is selected), tear-off menus (a pop-up menu that can be moved around the screen like a window), etc.

Embodiments of the present invention may also be implemented in hierarchical menus (submenus). In another embodiment, aspects of the present invention may be applied to other GUI objects besides menus, such as for example, tables. For example, in one embodiment, when a row within a table is selected, text within the selected row may begin to scroll.

Additionally, embodiments of the present invention may be implemented within graphical user interfaces of varied environments, such as, but not limited to, operating systems, application programs, or web pages.

In one embodiment, selecting a menu item (such as for example by hovering a pointer over an updatable menu item) for a predetermined period of time results in different types of information or content being displayed within the updatable region. For example, referring to FIG. 2A, when a pointer is initially hovered over item 212 for up to a first time period (e.g. ten seconds), the text within the updatable region scrolls to display the quota (time remaining) on a user account (i.e. "1 hour 20 minutes remaining"). However, once the pointer has been continuously hovered over the item for an amount of time equal to or over the first time period (e.g. greater than ten seconds), the text within the updatable region changes from quota information to some other type of information, such as for example data transfer statistics, or other information associated with the user account or menu item.

Updatable Menus will Work with a Variety of Systems

It's the Potential Stupid

The patent points to the fact that the updatable menus could run video while at the same time mentions that the system could be applied to a Web TV System. That's where one aspect of this patent could pack a punch. I have a folder on Safari called "World News" where I list CNN, MSNBC, The Beast and so forth. If the potential of this patent came to life, I'd be able to list live video feeds into my list of news sites. I could check the video section out and if something big was happening, the patent states that I could "tear-off the menu" – which means that I could keep the live feed running on my desktop while I'm working so that I could keep track of an ongoing story. This would be a hybrid Web TV feature.

Another application for me could be used for listing live NASDAQ quotes in my "Financial News" folder. Yes, I could use a widget, and do, but I'm in my folder more often than I use my widgets. So having that option would be of benefit.

I also have an "Entertainment" folder on Safari. I List my favorite Movie houses so that I check out what's new every Friday morning. But it's a static link. I have to go to the movie site and seek out what's new. What if the "new movies" where simply listed for me automatically using the updatable menu items feature. Now that's something that I expect from a modern computer. Automate mundane processes. Make my life easier and save me time.

What if I was shopping for a new car? I usually take a year to make up my mind while I check out prices, test drive them in different conditions and weigh out my options. What if I gave my updatable menu some parameters to keep track of the prices from a certain radius within my city? The changing prices could be automatically updated for me over time. That would make life easier and save me time.

As a pure Web TV application, I could imagine listing my shows in favorite files like Drama, Comedy and so forth. I'd be able to scroll down my list, check out the times of each show and perhaps read a new synopsis delivered to me automatically in my updatable TV Show menu.

I'm sure that you could think of a few winning applications for updatable menu items and that's why this patent packs a punch. It's the potential stupid.

Apple credits Kevin Armstrong as the sole inventor of Granted Patent 7,856,602 originally filed in Q2 2005. Kevin Armstrong couldn't be found in our database of Apple engineers. There is one Kevin Armstrong listing that shows that he's associated with two other patents not related to Apple here. I could have missed something in my research or it could be that Apple acquired the patent. That latter of course would make it all the more interesting.

Apple was also granted a patent for new profile audio plug receptacle for a future handheld device. Apple's patent application was only revealed on March 11, 2010. That has to be one of the fastest approved applications ever. It makes you wonder if this was expedited for a reason. 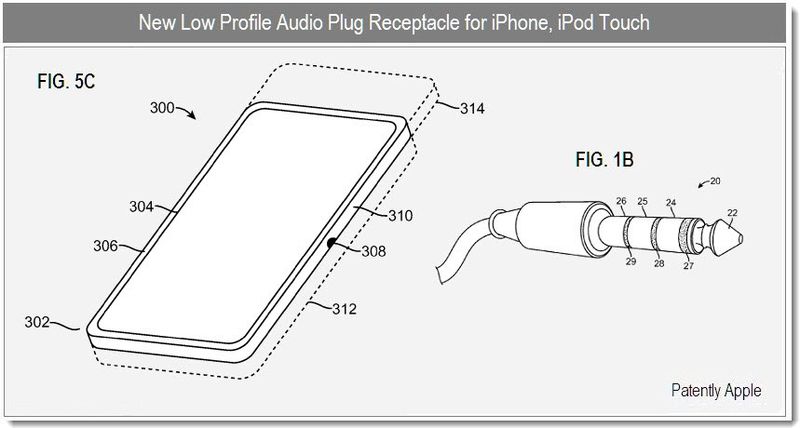 Dick, I appreciate the constructive feedback as I don't own an Apple TV yet. I'm equally glad that you see the potential of this feature being expanded upon in the future.

This is the way some menus on AppleTV presently work

Using the AppleTV remote or an iPhone:

3) do nothing and Cover Art (for all "Movies") starts to display after a few seconds, if available

4) select a submenu such as "Genre" and another submenu appears: e.g. Comedy, Drama, etc.

5) Do nothing and Cover Art (for all "Genres", in Order by Genra") is displayed , if available.

As you continue the drill-down into the menus, the animated Cover Art gets more specific to match your selection.

This is all going on because there is a constant dialog between your AppleTV and iTunes -- either on another computer in your home or iTunes servers in the sky.

What makes this all work, is that there are natural delays when presenting an AppleTV menu where the background dialog can be used to refine and improve the UX.

Now, here is where this could get real interesting:

- Imagine the device is an iPad instead of an AppleTV.
- There are 2 areas on the screen a menu area and an active update area
- side by side in landscape
- semi transparent menu popup in portrait

The same process as for AppleTV could be used to select items for play on the iPad with content from
- Audios and videos currently stored on your iPad
- iTunes on another computer in your home
- iTunes computer in the cloud
- 3rd party, e.g. NetFlix, ATT U-verse, Comcast, ABC, etc.

When you select a video, the menu construct is replaced by the video (full screen) and vice versa when you end the video.

So, yes, this "Pick-N-Play" menu construct has great potential for many types of aggregated content (your stocks,and cars examples) -- especially on a touch-screen device where a tap is used to select instead of the click-and-hold shown in the pictures.

When Lion apps start to go full screen, i can see a similar semi-persistent menu being used on non-touch interfaces.

Like you said, "It's the potential stupid." Good Catch.