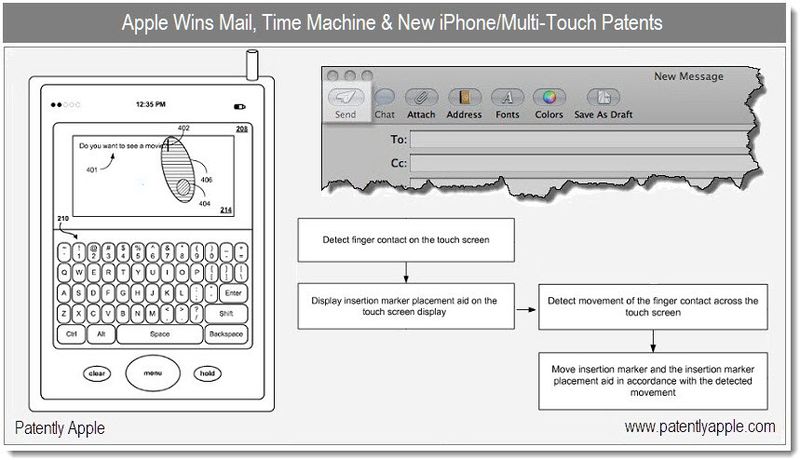 The US Patent and Trademark Office officially published a series of 12 newly granted patents for Apple Inc. today. Some of the minor patents issued today covered Time Machine, which may come in handy in Apple's current patent infringement case, and a design patent which relates to Apple's Mail app. Yet the notables within today's group of granted patents include strategically important iPhone/Multi-Touch patents which will definitely add to Apple's smartphone war chest.

Apple has been granted three design patents this morning. The first design win relates to Apple Mail. Specifically, the cool "Airplane Send Icon" is the focus of this patent which credits CEO Steve Jobs and Bas Ording as the inventors. The second design win is for their now defunct Bluetooth Headset which Apple may resurrect in a future product. 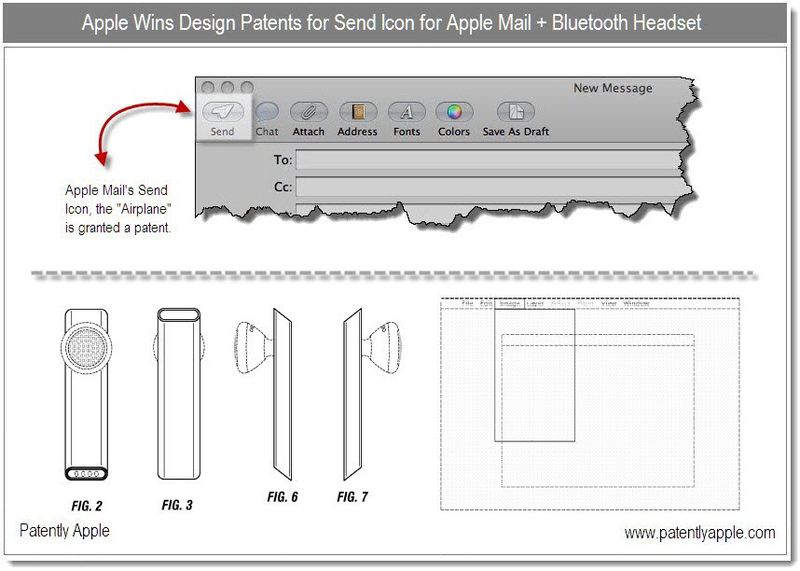 Apple's granted patent is about multi-touch. Specifically it's about intelligent input rejection and operational mode transitions. Apple's patent states that "For a hand-held multi-touch touch-surface device that may be put into a pocket, purse, or held against the head (e.g., portable music player, portable video player, personal digital assistant or mobile phone), detecting when the device is being clasped on the way into or out of the pocket, against the body, or against the head is very useful for: input rejection (ensuring that touch-surface input signals generated as a result of these actions are not mistaken for normal finger/stylus touches); operational mode transitions (e.g., dimming the device's backlight, putting the device to sleep and waking the device from a low-power state); and, for mobile telephones, answering calls (e.g., when the device is brought near, but not necessarily touching the head) and/or terminating calls (e.g., when the unit is placed into a pocket or purse)." 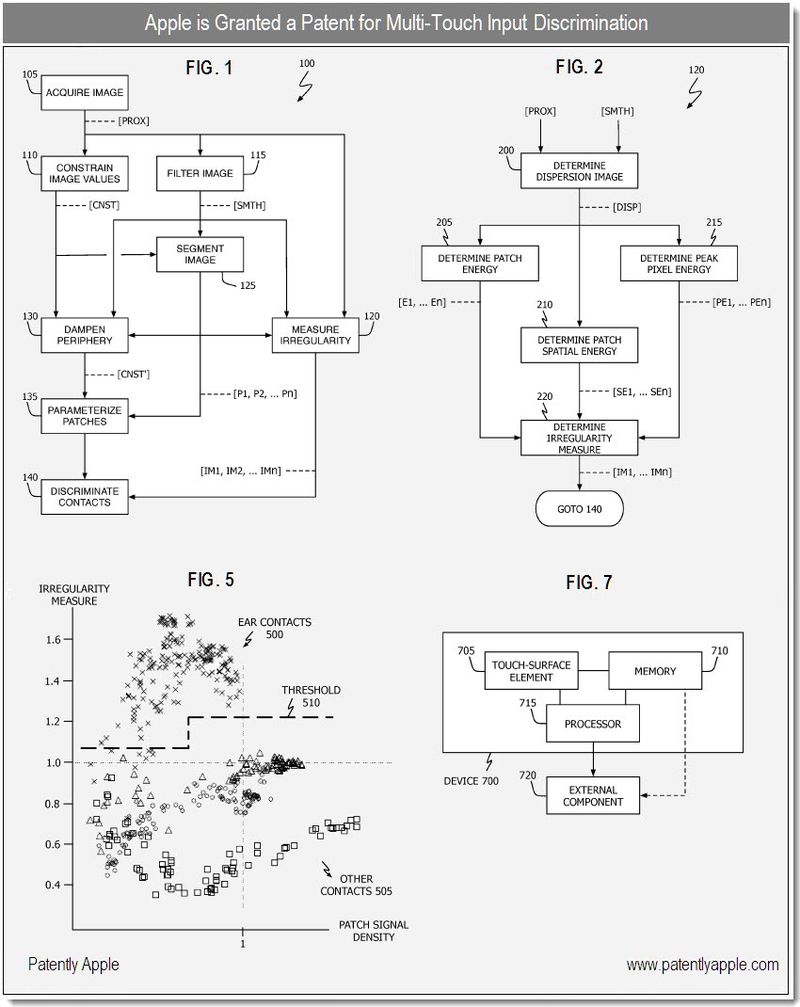 Apple's patent FIG. 1 shows, in flowchart form, a multi-touch processing methodology In patent FIG. 2 we see a flowchart form, a patch irregularity calculation; In patent FIG. 5 we see a plot of empirically determined data illustrating a patch irregularity measure's ability to discriminate between ear contacts and other touch-surface contacts (e.g., fingertips, thumbs and cheeks); and FIG. 7 shows us a block diagram form of a touch-surface device.

Apple has been granted a patent that generally relates to user interfaces, and more particularly, to a method, system, and user interface for positioning an insertion marker in a touch-sensitive display. 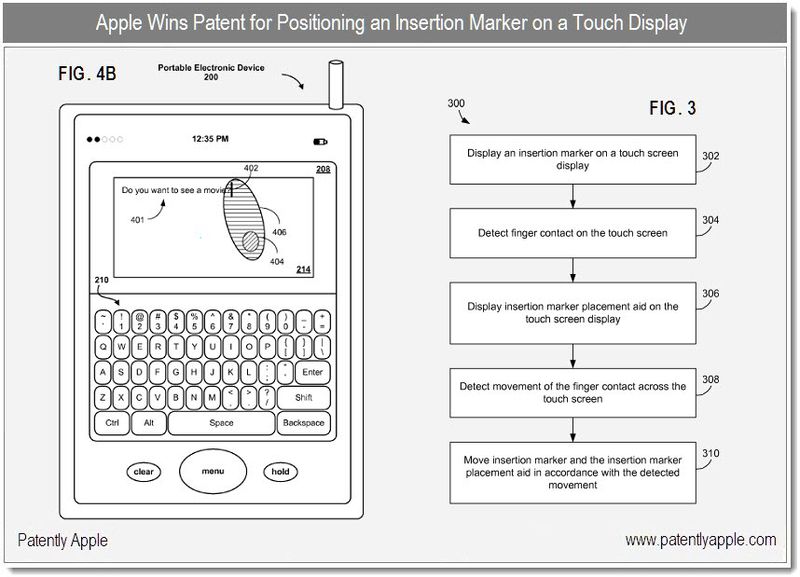 Apple has been granted yet another patent for Time Machine and specifically for a "User Interface for Backup Management." Last week Apple was granted two other Time Machine related patents "Navigation of Electronic Backups" and "Conflict Resolution in Recovery of Electronic Data." It was noted in our October report that Apple is being sued for alleged patent infringement by Mirror Worlds. They claim that Spotlight, Time Machine and Cover Flow infringe their patents. Apple's latest string of related patents may come into play during their trial. 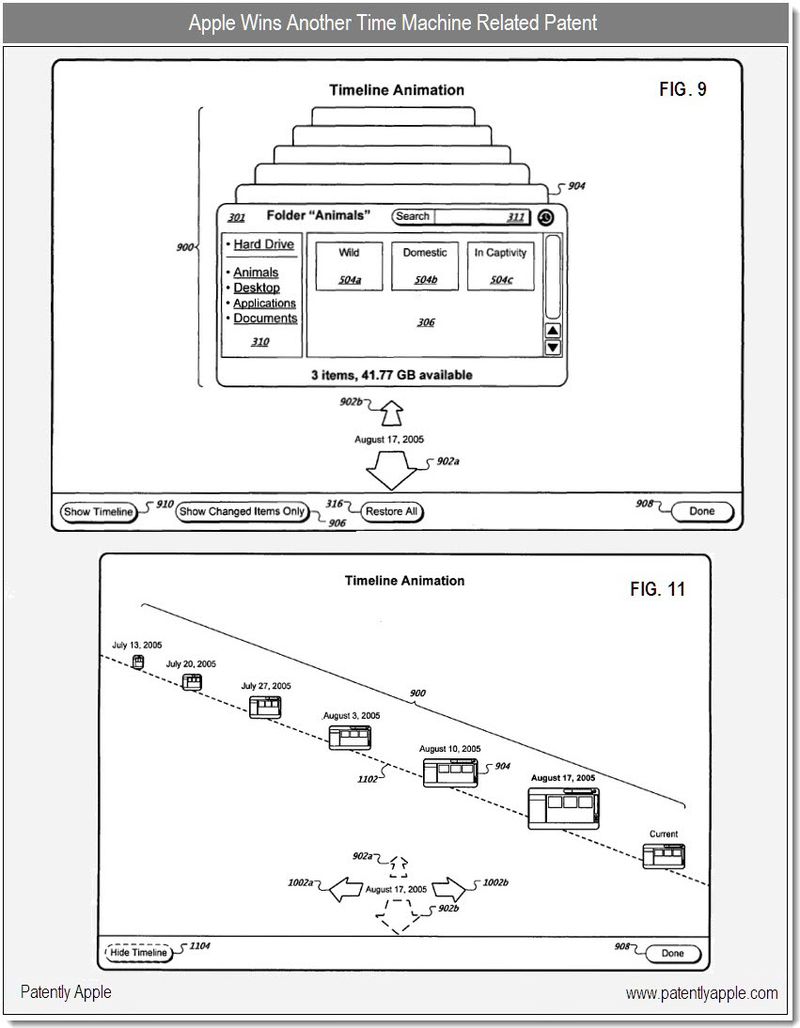 In Other Apple News

Apple Sued: Great Northern Insurance Co. vs. Apple Inc: The legal complaint filed against Apple states that a MagSafe adapter ignited combustible materials within the residence of Eric and Penelope Marziali, causing a fire. After a detailed investigation of the cause of the fire, the fire marshal for the Town of Glastonbury, Connecticut, concluded that the origin of the accidental fire appeared to be associated with the external system components of the laptop (MacBook Pro). Great Northern Insurance Company paid out $75,000 to the Marziali's and is seeking to recover these costs from Apple. The case came to light in documents found in December, though the original filing with the Connecticut District Court was made on November 19, 2010 (Case 3:2010cv01826).

There have been other patent infringement lawsuits filed against Apple in the last 30 days. There were two filed by Affinity Labs of Texas, which are tied into a legal case that began in Q1 2010. Another was filed yesterday by Multimedia Patent Trust. It's a complicated suit with a lot of baggage. Yet for our legally minded fans that might be interested in reading up on this case, we'll point you to Foss Patents - who present a long but thorough breakdown of this new lawsuit.

Note to Twitter Fans: We're considering adding our report's cover graphic with each future tweet due to the new twitter layout. If you like this feature let us know and we'll continue with it. As examples, our last two entries have this included. Once you're signed into Twitter, then just click on the "picture" icon located at the top-right corner of each of those tweets. This will open up the right panel and present you with the cover graphic.