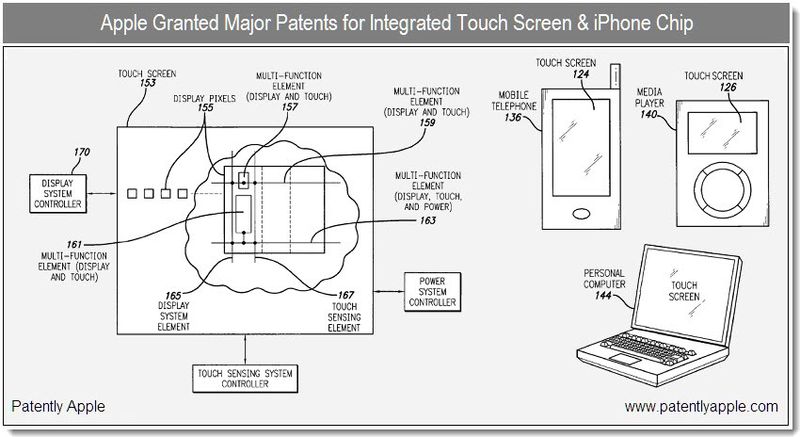 The US Patent and Trademark Office officially published a series of 20 newly granted patents for Apple Inc. today. In our second patent report of the day, we cover Apple being granted patents for their photo-centric Aperture application and a key on-chip decompression engine likely related to their A4 processor. Yet the main patent within this group goes to one that covers new integrated touch screen technology that was only filed for in March. It's nice to see that Apple keeps pushing their high-end multi-touch screen technology to new heights.

Apple's patent figures 1A-1C shown below illustrate a number of end-user example's that the touch screen patent relates to, such as a mobile telephone (iPhone), a digital media player (iPod), and once again – Apple illustrates a possible future touch based MacBook display. Each includes an example integrated touch screen system which is presented in patent FIG. 1D. In patent FIG. 2 we see a block diagram of an example computing system that illustrates one implementation of an integrated touch screen. 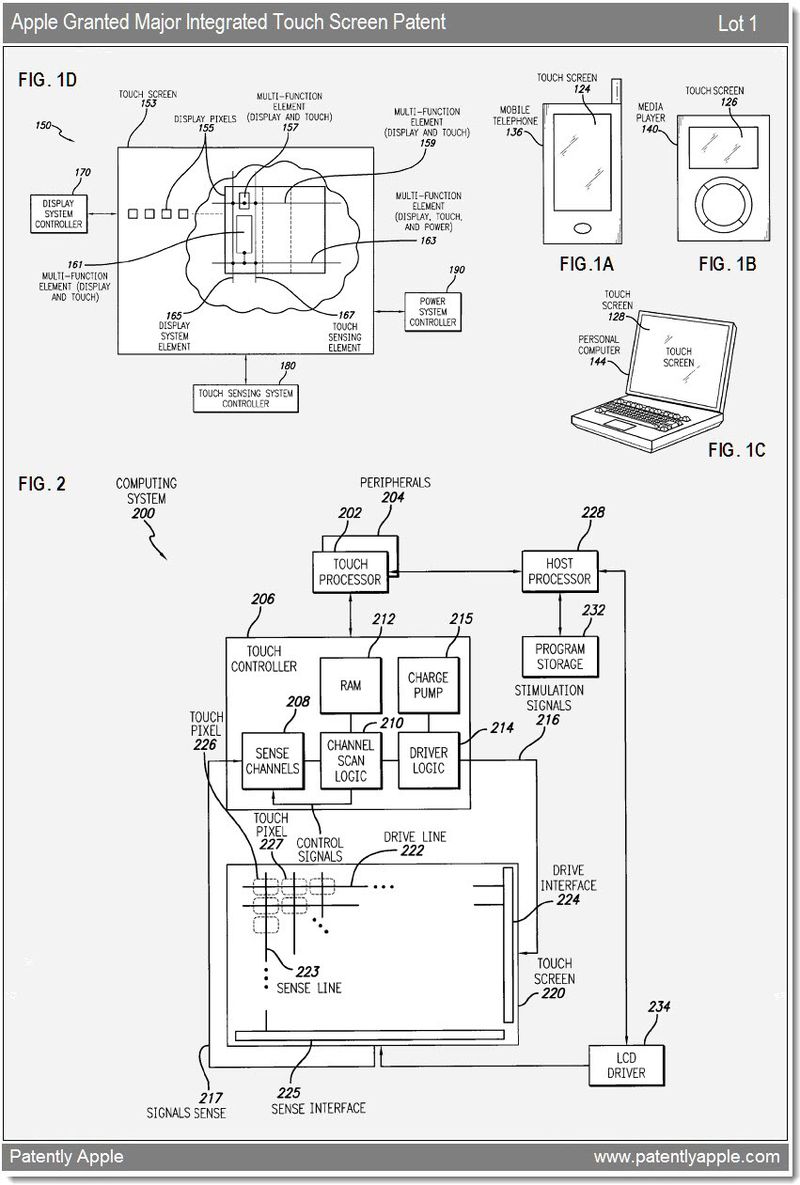 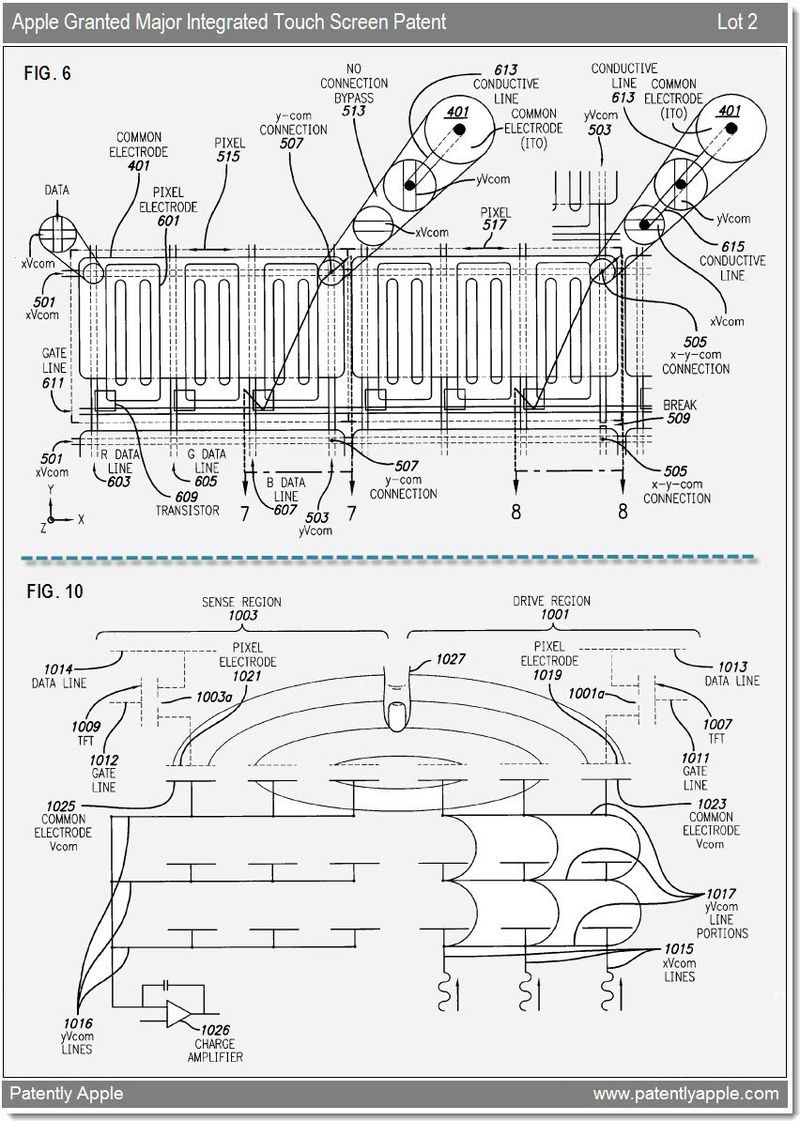 Apple's Patent FIG. 10 noted above illustrates an example touch sensing operation. Patent FIG. 6 is a magnified view showing details of display pixels and other structures of a touch screen.

Apple's patent FIGS. 13A shown below presents us with an example configuration of multi-function display pixels grouped into regions that function as touch sensing circuitry during a touch phase of a touch screen. Patent FIG. 21A illustrates an example layout of display pixels for one example touch pixel. 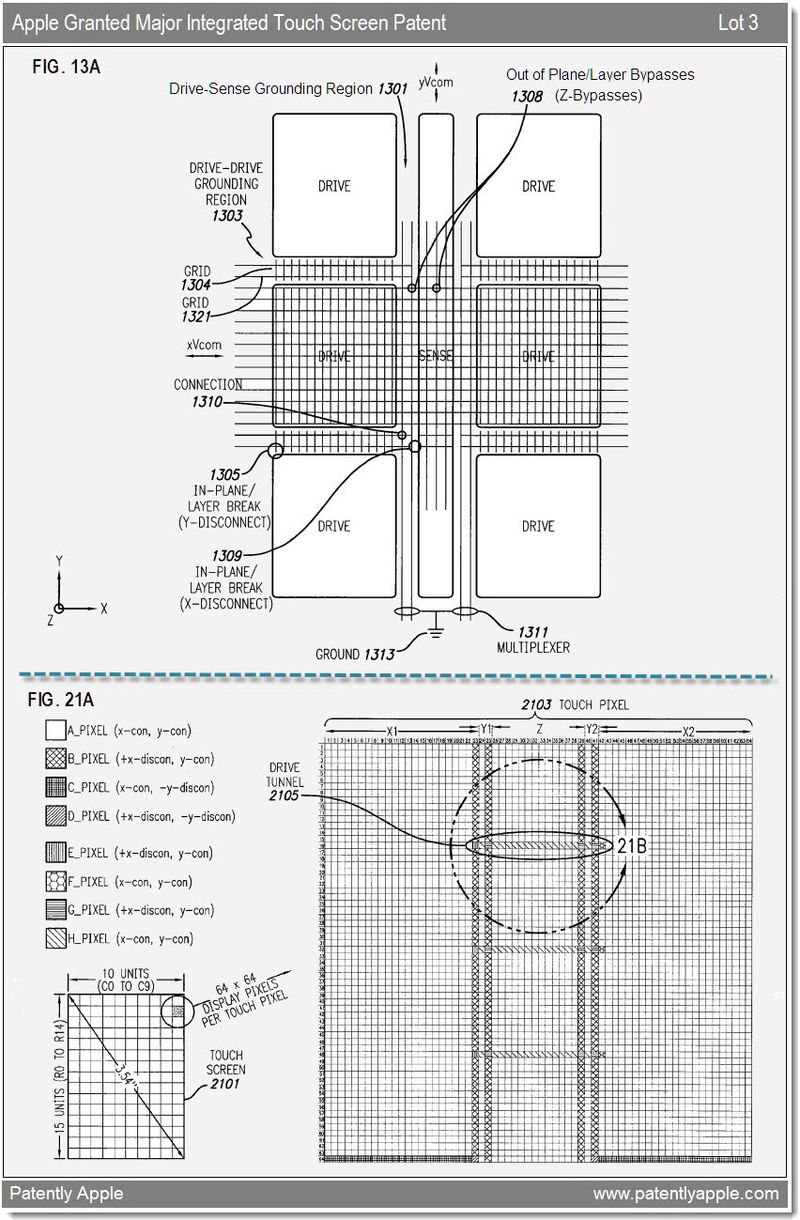 For more information on this patent, see granted patent 7,859,521 which was originally filed in Q2 2010. Additional references date it back to 2009. Apple credits Steve Hotelling, Marduke Yousefpor, Shih Chang and John Zhong as the inventors. Check out our Archives for additional information on this subject.

Update: To the Naysayers amongst us who state things like "The drawing of a laptop is iconic, serving the same purpose as clip art," we say, you should look back to Apple's recent patent win covering a convertible notebook that has an original graphic. It's important to see this current touch patent in the bigger picture which includes other Apple macbook touch-related patents. Seeing things in a myopic light is silly. That particular graphic showing how the display will convert into a tablet in the future, has nothing to do with a "current style notebook" that Steve Jobs was referring to in context with this subject. It's a matter of context. Whether Apple actually delivers a convertible to market is for time to tell.

A microcontroller is often referred to as "a computer on a chip," and in this second patent, we see that Apple has been granted a key processor patent related to microcontrollers comprising of an on-chip decompression engine.

The multi touch panel processor 704 noted In Patent Figure 7 below, could be implemented as part of the microcontroller of the present invention. 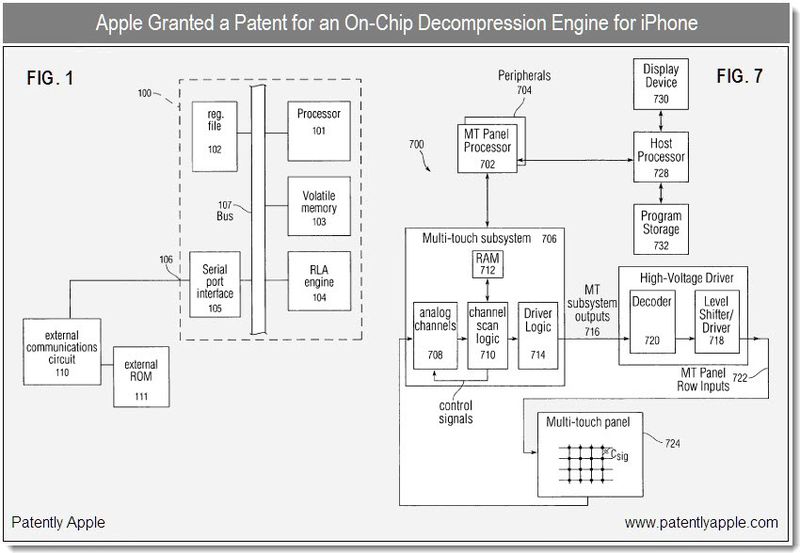 Apple credits Thomas Wilson as the sole inventor of Granted Patent 7,861,073, originally filed on January 3, 2007 or days before the iPhone was first publically presented. While we're on the topic of Chip architectures, it should be noted that Apple was also granted two patents relating to NAND Flash Memory. The first one is titled "Iterative memory cell charging based on reference cell value," while the second one is titled " Monitoring health of non-volatile memory."

Apple has been granted an important patent relating to their photo-centric application known as Aperture. 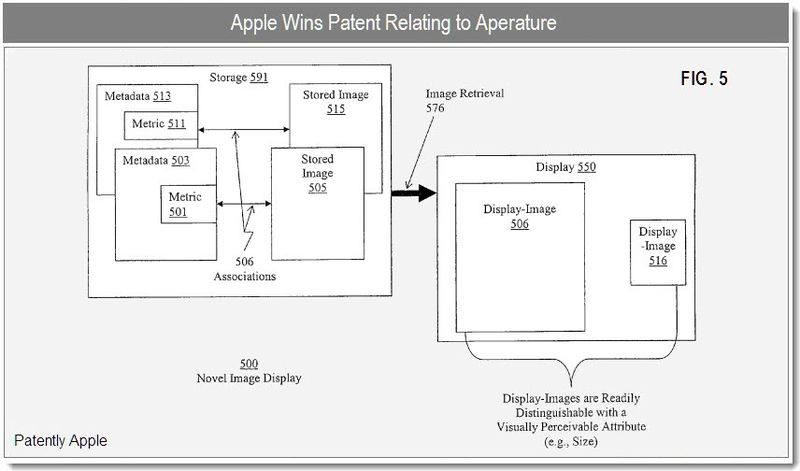 Metrics: embedded data could comprise one or more of a caption, a place and/or a date at which the image was captured, an opacity or transparency value corresponding to said image as stored and copyright information associated with the image. The metric may also relate to a photographic identity, e.g., to a particular photographer, a photographic entity, or another source of the image.

Attributes: Embodiments of the present invention may be implemented with other visually perceivable attributes reflecting, yet logically independent of, the metrics associated with the images. For instance, in addition to or instead of the relative display size, metrics may be reflected in the relative degrees of brightness, clarity, contrast, tone, coloration, fuzziness, trim or border enhancements, transparency, opacity, shape, text based comments, and the like.

It's been a busy Quarter for Apple's "Time Machine." Today, Apple was granted their fourth patent.  The other patents were published on October 05, December 14 and 21 respectfully.  Apple was also granted a Logic Pro related patent regarding reverb (see "Adding Reverb in Logic Pro" video.)