The US Patent and Trademark Office officially published a series of nineteen newly granted patents for Apple Inc. today. Within this first round of notables we point to Apple winning a design patent for their older iPod's outer casings, another patent covering the Mac's unique translucent and auto-timing windowing system for such things as sound and brightness and lastly, and perhaps more importantly, Apple has been granted a patent for a new light display. This new display technology could be one of the keys of pushing the iPad further into the enterprise market.

Apple has been granted a patent for a "light sensitive display." This is Apple's second granted patent on this subject which could suggest that it's more than a defensive patent. The first patent was granted in November 2009 and shortly thereafter, Apple applied for a "light pen" patent which tied directly into this "light sensitive display" to provide us with context. Interestingly, a new report surfaced in November that discussed a next generation Multi-Touch Display in development that will be able to work with a stylus and touches made with a glove. The release of such a display in concert with a light pen would allow devices like the iPad to further penetrate professional markets like health care, the legal field and beyond – where signatures and filling in electronic forms is paramount. 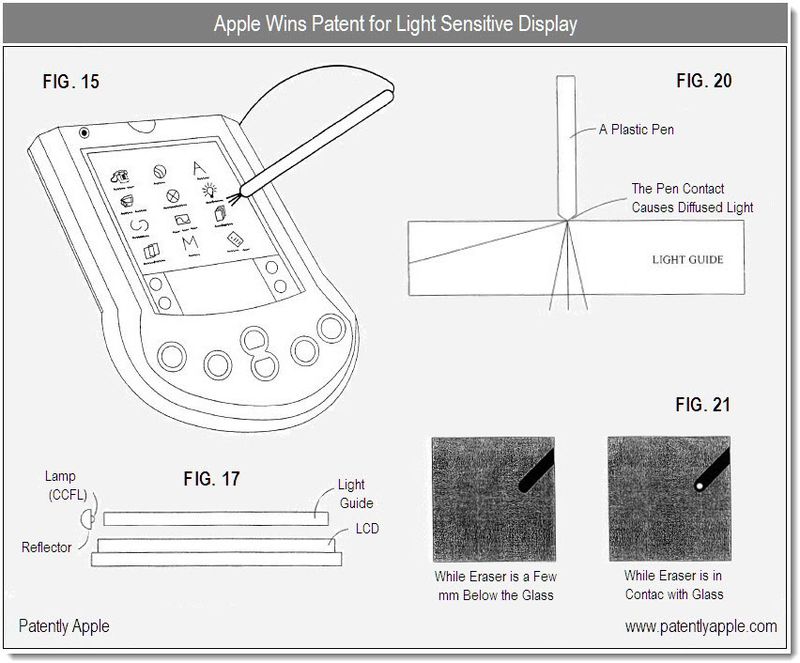 Apple's patent FIG. 15 illustrates a handheld device together with an optical wand. FIG. 17 illustrates a front illuminated display which involves incorporating a light guide in front of the liquid crystal material. To improve the light collection a reflector may be included behind the lamp to reflect light that is emitted away from the light guide, and to re-direct the light into the light guide.

Apple's patent FIG. 20 illustrates significant diffraction as a result of a plastic pen. One suitable technique for the localized diffusion of light involves using a plastic pen to touch the front of the display. The internally reflected light coincident with the location that the pen touches the display will significantly diffuse and be directed toward the photo sensitive elements within the display. Patent FIG. 21 illustrates a shadow of a pointing device and a shadow with illuminated region of a pointing device.

Apple has won a patent relating to timed translucent windows under their patent titled "Method and Apparatus for Displaying a Window for a User Interface." The patent examples were terribly presented in the patent and so I've set two custom translucent timed window graphic examples to illustrate one aspect of the patent that I'm sure that most will recognize below. One is when you're adjusting the sound on your Mac and the other is setting the display brightness. These adjustments are found on your Apple Keyboard and they pop up as you adjust these features yet automatically disappear once you've set the levels to where you want them. The technology behind this windowing system is  covered in this patent.

Apple credits Imran Chaudhri and Bas Ording as the inventors of Granted Patent 7,853,891 originally filed in Q1 2008. Note: The grey background in the graphics noted above are set so as to allow you to view two of the windowing elements representing that of sound and brightness. These elements however, actually present themselves on screen with a translucent background and blend into whatever you're working on without overly interfering with what you're viewing on your webpage or document.

Apple has been granted a patent for iPod covers. Design patents are pathetically described and though the patent describes "covers" – they're likely better understood as the iPod-shells or outer shells of the iPod. The designs cover two sizes that appear to be for the iPod Classic and third generation iPod Nano.

Interesting to see the timespan between the patent and the commercial desirability of a product.