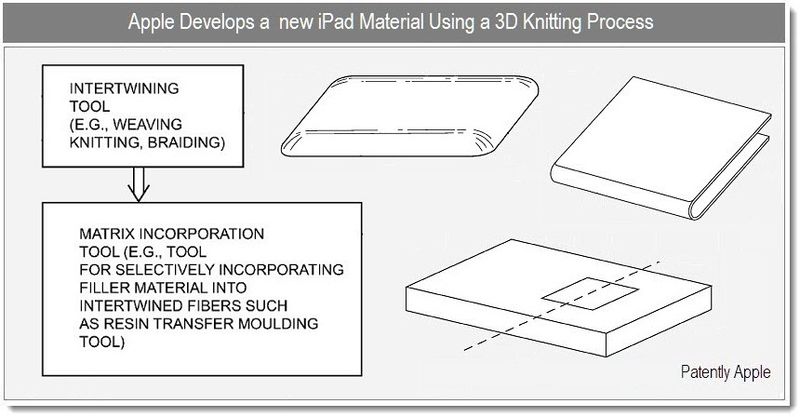 In September Apple was granted a mysterious patent concerning an Improved Laminate Composite material. Today we see that this new laminate composite could be playing a part in a new lighter and more flexible material that could end up in future generations of Apple's iPad in addition to new accessories like headphones and folio-styled cases. Apple's patent intrigues us with rich details about their new 3D knitting process that will produce these next generation materials. It's unknown at this time if Apple will use the lower cost material for entry units alone while retaining aluminum for their higher end units. However, considering that Apple likes to provide consumers with free engraving on such portables during the holiday season, I can't see this being extended to fiber based materials. Then again, time will tell. Update: Another patent has been added to this report that may point to an interesting twist to a future iPad.

Below you'll find a perspective view of an iPad-like device having a housing with compound curves is shown in Apple's patent FIG. The iPad-like device 60 may also have four corner portions (marked as patent points 62). Each corner portion has compound curves. These curves may be difficult or impossible to form from conventional woven-fiber sheets. As shown in FIG. 10, device 10 may have curved sidewalls 70, a display or other front-mounted component 74, and internal electronic devices 72 (e.g., processor and memory circuitry). 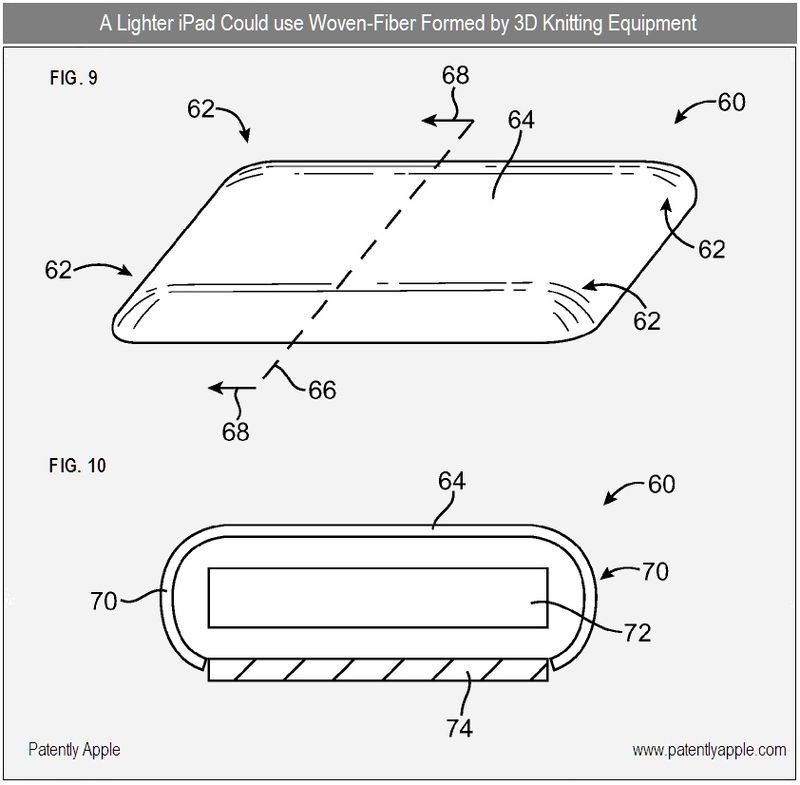 According to Apple's patent point # 52, to achieve these types of shapes shown above, Apple will actually use three-dimensional (3D) knitting equipment or other intertwining tools. 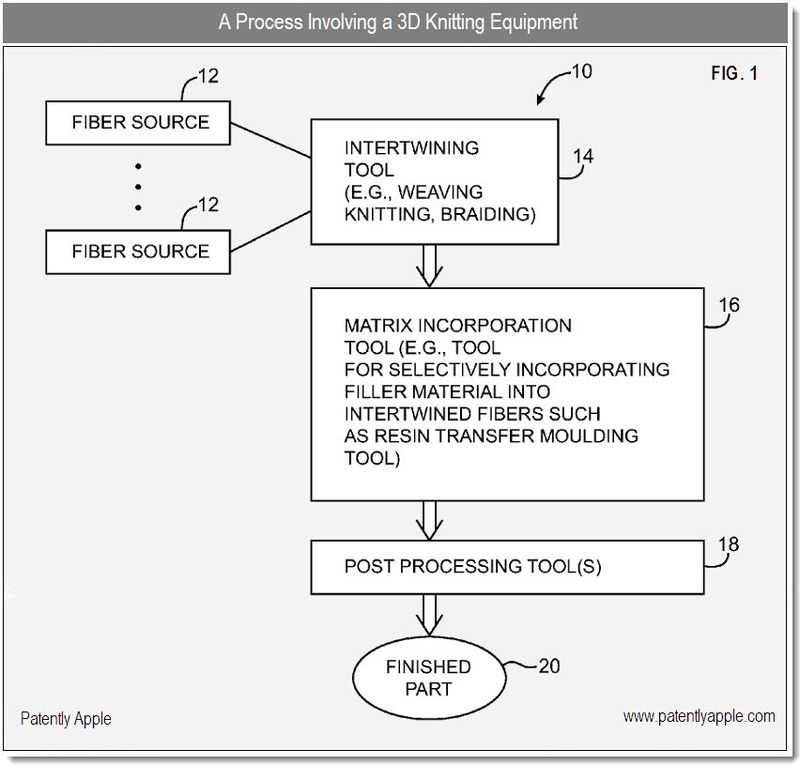 About the Woven Fiber

As shown in FIG. 1, fabrication equipment 10 may be provided with fibers from fiber sources (12). Fiber sources may provide fibers of any suitable type. Examples of fibers include metal fibers (e.g., strands of steel or copper), glass fibers (e.g., fiber-optic fibers that could internally convey light through total internal reflection), plastic fibers, etc. Some fibers may exhibit high strength (e.g., polymers such as aramid fibers). Other fibers such as nylon may offer good abrasion resistance (e.g., by exhibiting high performance on a Tabor test). Yet other fibers may be highly flexible (e.g., to stretch without exhibiting plastic deformation). The fibers provided by sources may be magnetic fibers, conducting fibers, insulating fibers, or fibers with other material properties.

Fibers may be relatively thin (e.g., less than 20 microns or less than 5 microns in diameter--i.e., carbon nanotubes or carbon fiber) or may be thicker (e.g., metal wire). The fibers provided by sources may be formed from twisted bundles of smaller fibers (sometimes referred to as filaments) or may be provided from sources as unitary fibers of a single untwisted material. Regardless of their individual makeup (i.e. whether thick, thin, or twisted or otherwise formed from smaller fibers), the strands of material from fiber sources are referred to herein as fibers. The fiber from sources may also sometimes be referred to as cords, threads, ropes, yarns, filaments, strings, twines, etc.

Beyond the iPad: Headphones 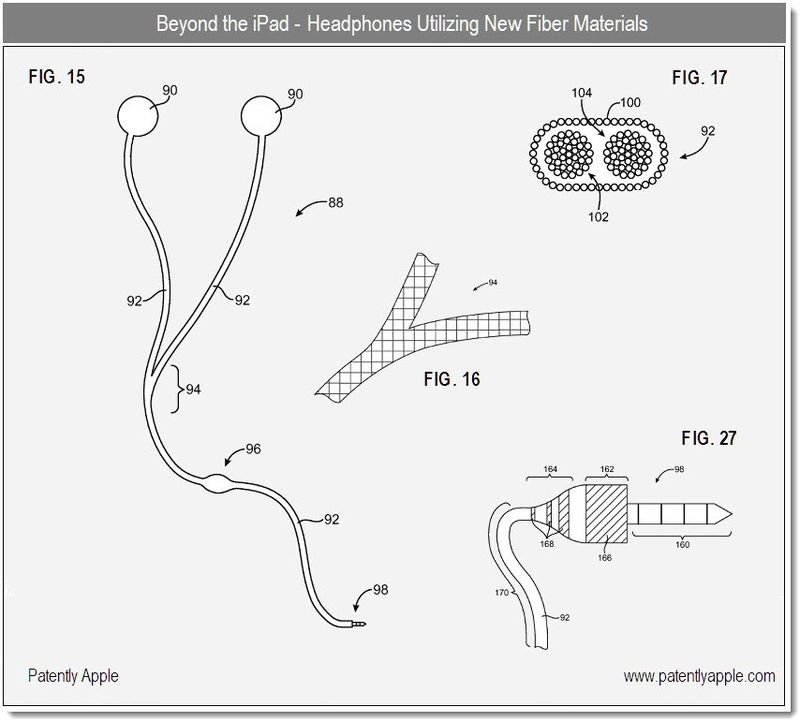 Beyond the iPad, an example of an electronic device that may be formed from intertwined fiber structures, could be a pair of audio headphones. An illustrative headset is shown in FIG. 15. The headset 88 may include a main cable portion 92 which may be formed from intertwined fibers and may have portions formed from different types and amounts of fibers and different patterns and amounts of binder (as examples). Earbuds 90 may be mounted at the ends of the right and left branches of cable. In region 94, the cable may have a bifurcation (forked region). Feature 96 may be an enclosure for a switch, microphone, etc. The end of the cable may be terminated by audio connector (plug) 98.

Apple's patent FIG. 16 is a perspective view of a forked (bifurcated) tubular structure formed with intertwining equipment. Patent FIG. 17 is a cross-sectional view of a tubular structure such as a cable for the headset – and patent FIG. 27 is a side view of an illustrative audio plug having a fiber cable into which binder has been selectively incorporated to adjust cable flexibility along the length of the cable.

Beyond the iPad: Folio-Style Cases 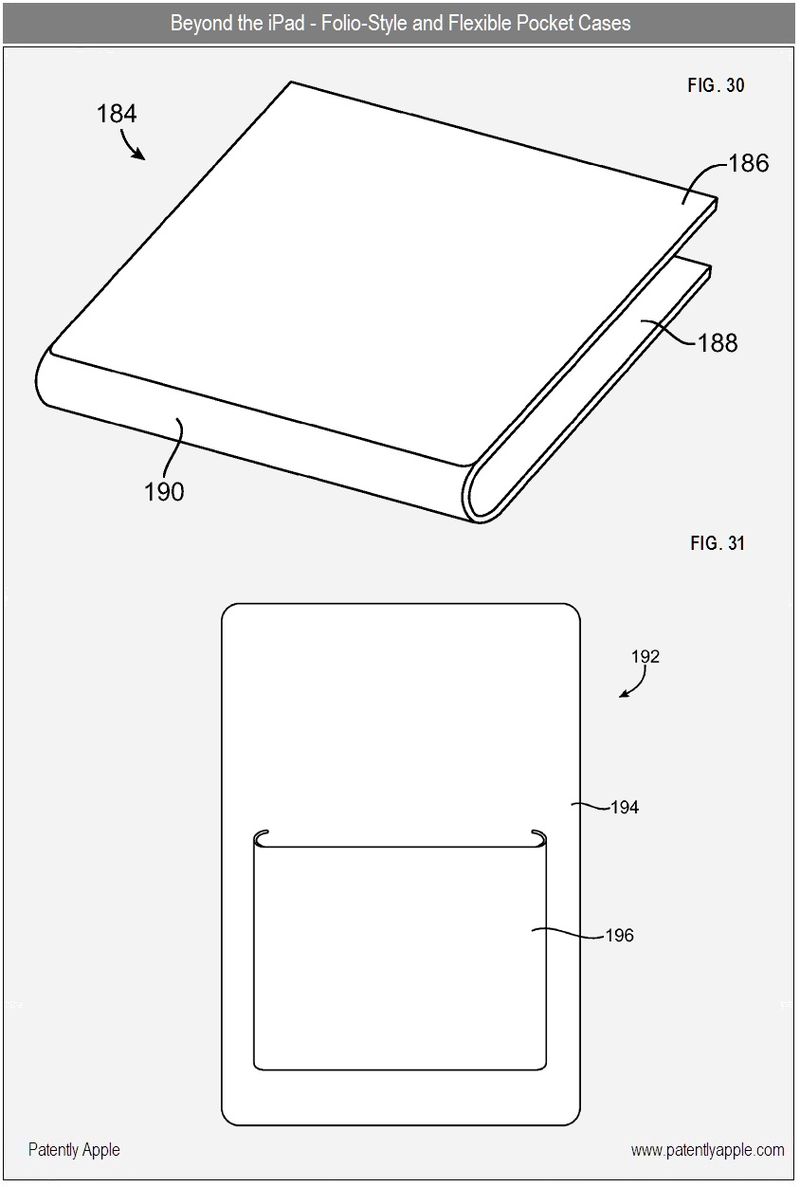 In Apple's patent FIG. 30, we see a folio-style case for an iPad (and likely a version of such for the iPhone). In patent FIG. 31we see a structure which may serve as a flexible pocket that holds a cellular telephone or music player. Portion 194 may be provided with a matching front face if desired.

Some parts that are formed from fiber-based structures may be used for electronic device housings or other applications in which at least a portion of the structure is adjacent to an antenna. 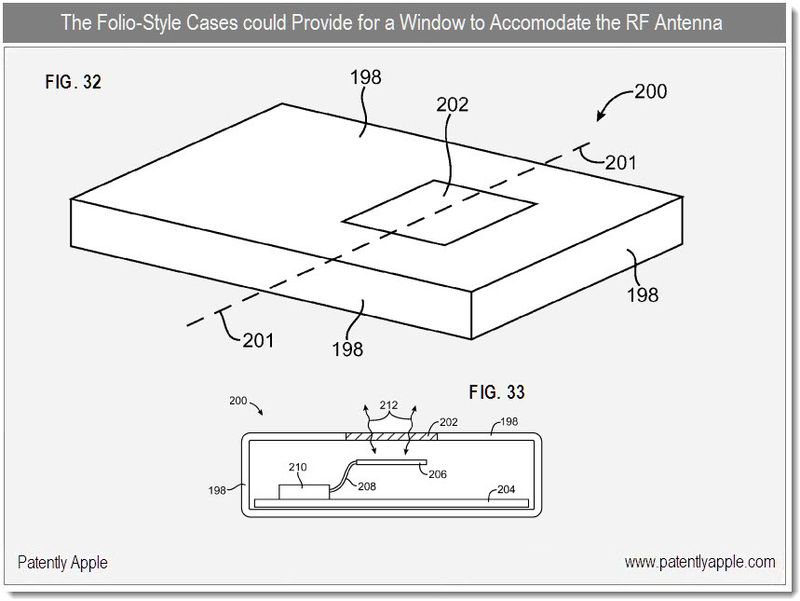 Apple's patent FIG. 32 is a perspective view of an illustrative electronic device having a housing formed of fibers with different properties in different regions to form a radio-frequency (RF) antenna window in accordance with an embodiment of the present invention.

In patent FIG. 33 we see a cross-sectional side view of an illustrative electronic device of the type shown in FIG. 32 showing how an antenna and transceiver circuitry may be mounted within the device

Update December 17, 2010: Along with today's patent outlining their 3D Knitting process for fiber materials, Apple appears to have also filed for a patent which may provide us with a peek into some kind of a product prototyping system of theirs that they wish to patent. To put it mildly, this isn't a consumer product. If you're a sleuth of sorts and happen to understand this patent in a better light, then please drop us a note.

Apple's patent generally relates to the estimation of a three dimensional surface shape of an object. More particularly, methods, software, hardware and systems are described for rapidly determining the surface profile of an object from a photographic image of a reflected light pattern from the object. The patent appears to take the profilometer to the next level.

For those wishing to investigate this patent, we've added a few of Apple's patent figures below to help you follow and visualize some of the key parts of their invention. 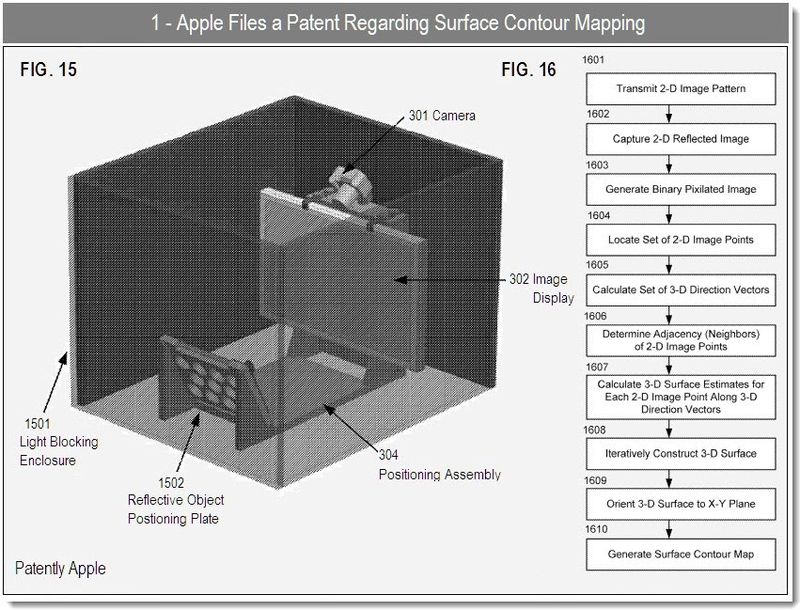 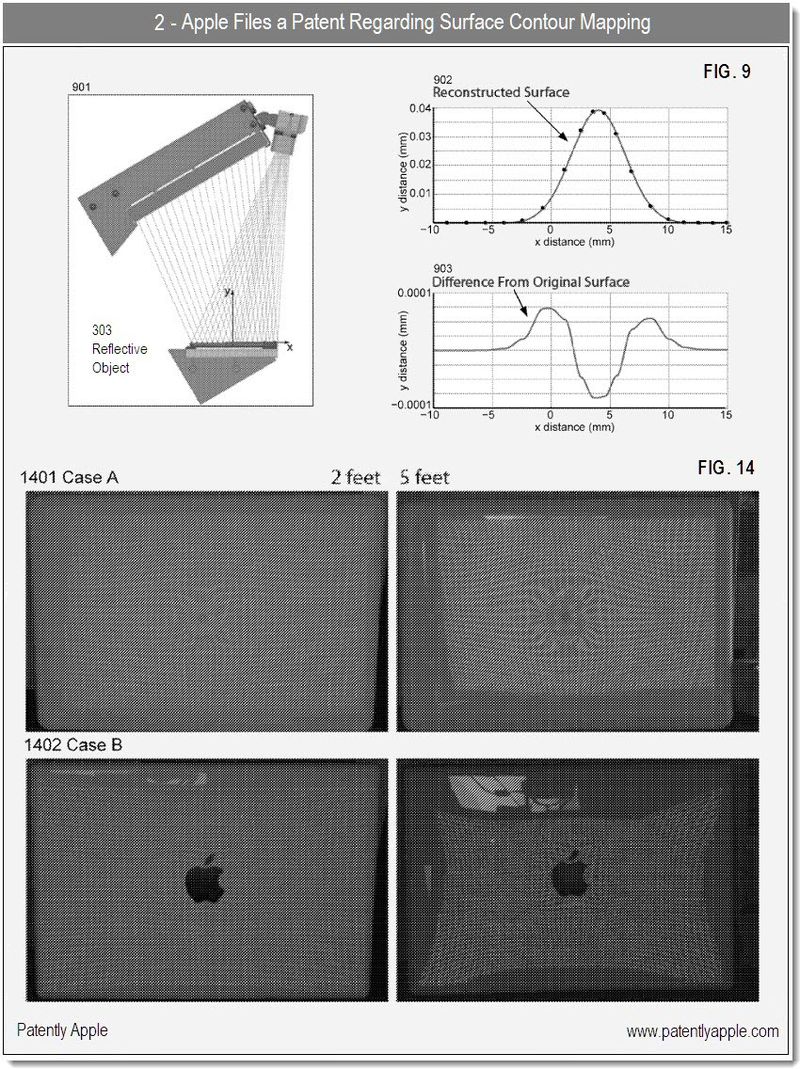 The patent figures found in FIG. 14 appear to be showing us the creation of a MacBook cover/lid in development with a black Apple Logo. Of course this is just a prototyping system and they may have added the logo in black just to show it's location and existance for these dreadful patent photos. It's interesting nonetheless. Hmm, then again, perhaps it's the fiber material being tested for a future entry iPad. That would be in context with the first patent noted in our report. Now that would be one wild find! For now, however, it's just a wild guess. But it sure gets you thinking, doesn't it?

Apple credits Bartley Andre, Scott Cannon and Patrick Kessler for patent application 20100315422, originally filed in Q3 2009. A secondary patent in this same vein was filed under 20100316280 for "Design Driven Scanning Alignment for Complex Shapes." The inventors of that patent application were listed as Simon Lancaster and Andrew Davidson.

And lastly a business oriented patent surfaced under Patent 20100319053 titled "Devices with Profile-Based Operating Controls." For more information on any patent listed here today, simply feed the patent number noted above into this search engine.

Notice: Patently Apple presents only a brief summary of patents with associated graphic(s) for journalistic news purposes as each such patent application is revealed by the U.S. Patent and Trademark Office. Readers are cautioned that the full text of any patent should be read in its entirety for further details. About Comments: Patently Apple reserves the right to post, dismiss or edit comments.

The patent noted above as "Devices with Profile-Based Operating Controls" is very interesting on several levels:

1) As indicated, It could allow company applications to securely co-reside with personal applications on a device used for business and personal use (whether the device is personally owned or company owned)

2) The "entity" could, in one manifestation, be the Apple App store. Through the described process, Apple could assure that Apps provided by the app store will only be [re]authorized to run on designated devices. This would protect Apple and 3rd-party Developers from unauthorized use or modification of their apps

3) By assuring security of business apps and curated app store apps, Apple could allow installation of a 3rd class of apps. These could be made available by 3rd-party developers without distribution or curation by Apple.

4) A variation of 3) is to allow the end user to write apps (or modify general-purpose apps) that could be easily installed as "private apps" on the user's devices and those of his friends or family.

5) Another variation of 3) and 4) would be for an individual or a company to freely distribute apps and content to potential customers or users. This could be used for things like:

The effect of this patent could allow Apple to meet the security needs of Apple, enterprises, developers and end-users -- while, at the same time giving all the ability to customize the device for their own specific needs.

It could eliminate the reasons for JailBreaking.

(Dick, Thanks for taking the time to break down that business patent noted above. What an excellent contribution!)