On December 30, 2010, the last patent application session for 2010, the US Patent & Trademark Office published a patent application from Apple that reveals the next chapter for their social networking app related to shopping. The patent details how shoppers will be able to communicate with their friends about items that they seek feedback on. Users will be able to send their friend's photos or videos of items to view so that their feedback could be specific. Additionally, some consumers will be able to communicate with the salespeople of their favorite stores so as to ensure that the items that they're seeking to purchase are firstly in stock and secondly available to put aside in a dressing room ready for them to try out at a specific date and time.

For personal security purposes, the social networking app could provide communications paths that could be encrypted or secured such that only authorized devices (e.g. certain friend's iPhones) could access the communications, or to ensure that polls or other interactive features are not manipulated.

This particular social networking app is to be used to share information with friends so as to receive their feedback – or it could be used to interact with an in-store kiosk.

Beyond in-store kiosks, the patent does note that kiosks could also be centrally located within a mall. In some ways that could be more convenient if you happen to be looking for a very specific item that could be found at several clothiers. Theoretically, one could "pre-shop" in order to save time instead of running around the mall. Perhaps what you're looking for is only available in your size and preferred color schemes at one of several stores. So convenience is one of the goals of this new app.

Realistically however, this aspect of the patent could take a little longer to come to market due to current market conditions and reliance on mall owners. On the other hand, if the larger malls want to win over the disposable income of the "iPhone generation," then they're going to have to get with it sooner rather than later. 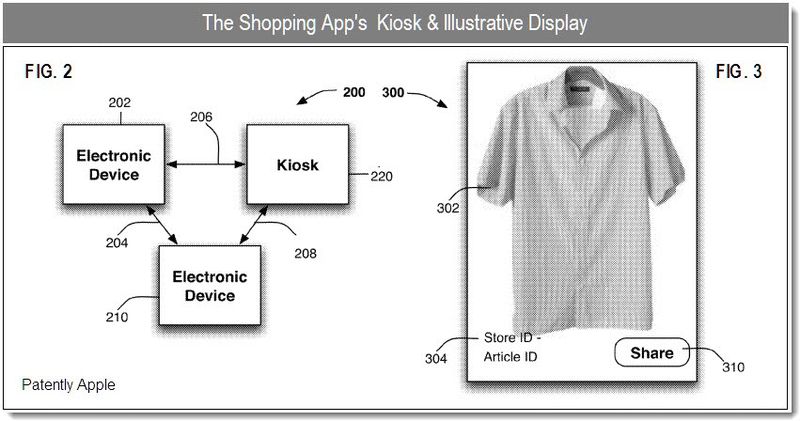 In Apple's patent FIG. 3 we see a schematic view of an example of the iPhone's social networking app's illustrative display for providing information identifying an article to a user's social network of friends. This illustrative display could include an image of clothing, as is shown in patent point 302 in addition to the description of the clothing and which store it's located in via ID numbers, noted in patent point 304.

The user could generate this image using any suitable approach, including for example, capturing an image or video via the iPhone's built-in camera or retrieving it from the in-store's database or other remote source like the web. Another method would simply include the user scanning the article's printed bar code on the item's ticket which could lead the user to images, video or other kinds of description details.

The user then sends this particular image of an article to friends (family or colleagues) for feedback. The friend receiving the request for feedback using the social networking app will be able to send back feedback back to their friend by typing in opinions or comments or using a slider expressing a yes or no reply as to whether their friend should buy the item. The friend could also simply hit a star within a star rated system set-up in the app itself or send a video response. See figure 4 below for a visual of one example screenshot. 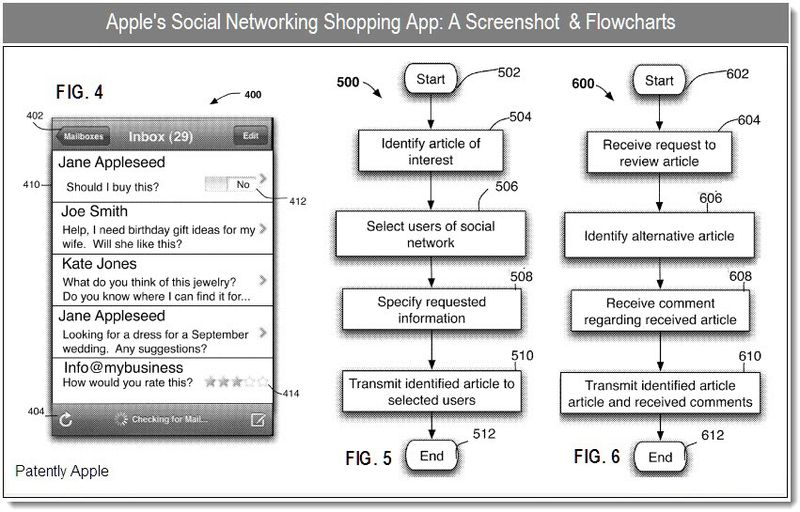 According to Apple's patent, the shopping app will allow a user to send any suitable requests to a particular store's sales staff to enhance the shopping experience. For example, a user could specify a context for which a purchase is necessary, and request recommendations from the sales staff (e.g., send a request indicating that a gift for a person of a particular age is needed). Another example would be could ask the sales staff to put a series of articles of clothing in a changing room to try on at a particular time.

The sales staff will be able to respond to these requests and personalize the responses by adding new information about an article of clothing of interest or to tell the customer that something new just arrived that they might want to try out when coming to the store. The staff could also check inventory to make sure that the article the customer is seeking is actually in stock. The staff could also send videos of new articles or perhaps notify users of new sales. More information about this kind of service could found detailed here.

While Apple emphasizes shopping in this patent, they also generally state that the social networking services provided in this proposed app may be used in other contexts, such as while traveling (connected to iTravel), out at night in town, or other places that a user may go.

Apple credits Stanley Ng, Christine Cho and Monica Tran as the inventors of patent application 20100332283, originally filed in Q2 2009. Whether Apple will roll this new iService into their new Ping social networking app or introduce a new brand isn't known at this time.