The US Patent and Trademark Office officially published a series of eight newly granted patents for Apple Inc. today which includes two design patents relating to their Universal Dock. Yet there's no doubt that the key granted patent of the day belongs to one relating to a light sensitive display which one day may be used with iOS devices. The unique aspect of this display rests with its ability to work with laser and/or light pens. While Steve Jobs may have vetoed the classic dumbed-down stylus for iOS devices, he never discounted the future use of advanced light pens. This is Apple's second patent relating to laser pen technology which may very well indicate that this option remains viable for future implementation.

Apple has been granted a patent for a light sensitive display. Apple's patent clearly articulates and illustrates that the display is used with a light pen. This is an important granted patent considering that Apple has already applied for an "Advanced Light and Laser Pen" patent. Even though Steve Jobs has played down the use of a dumb-stylus for use with their iPhone, it doesn't necessarily mean that this philosophy extends to an advanced light or laser pen. Obviously a series of patents on this matter now proves that such a design could still make its way into Apple's future roadmap. 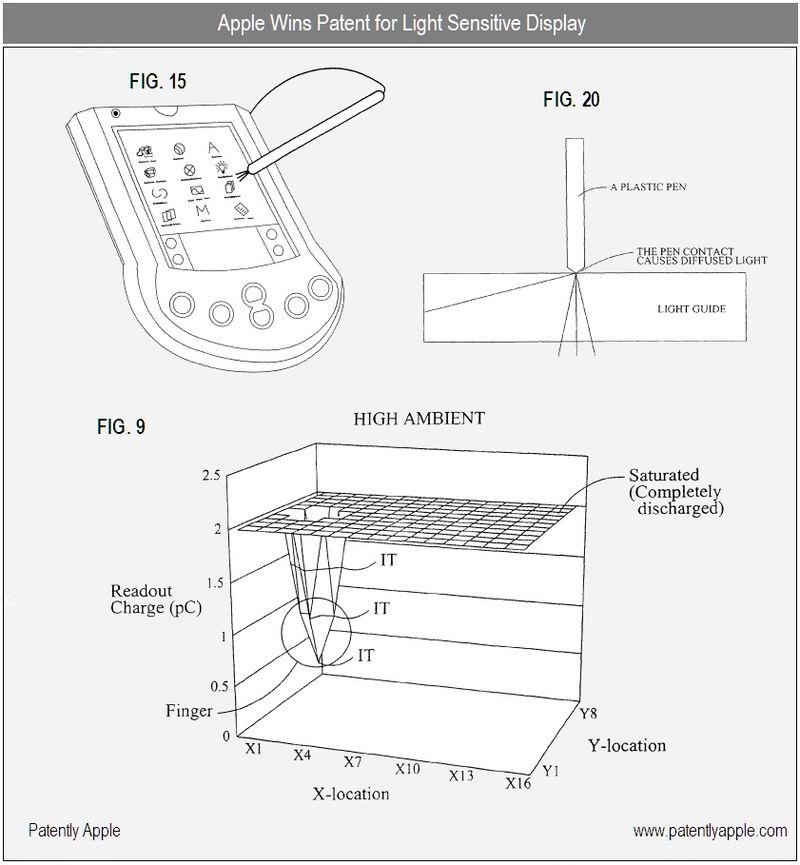 Why use a Laser Light Pen?

At low and dark ambient lighting conditions the integrated optical touch panel isn't expected to operate well to the touch of the finger because there will be an insufficient difference between the signals from the surrounding area and the touched area. To alleviate the inability to effectively sense at the low and dark ambient lighting conditions a light pen or laser pointer may be used. The light source may be operably interconnected to the display such as by a wire or wireless communication link. With the light source operably interconnected to the display the intensity of the light source may be controlled, at least in part, by feedback from the photo-sensitive elements or otherwise the display, as illustrated in patent FIG. 15.

Referring to Apple's patent FIG. 20: one suitable technique for the localized diffusion of light involves using a plastic pen to touch the front of the display. The internally reflected light coincident with the location that the pen touches the display will significantly diffuse and be directed toward the photo sensitive elements within the display.

The use of a "plastic pen" is interesting in context with yesterday's report that discussed a next-generation display for the iPhone that would be able to acknowledge a user's touch using a glove or plastic pen.

Apple's patent FIG. 9 is a graph of the capacitive charge on the light sensitive elements as a result of touching the display at high ambient lighting conditions.

For more in-depth information on this technology, see granted patent 7,830,461. Apple credits Adiel Abileah, Willem den Boer and Pat Green as the inventors of this patent which was originally filed in Q2 2006.

Apple has been granted a patent for their 2005 Universal Dock Design along with patent for a dock insert (not shown). While the original filing was made in 2005, their latest filing is noted as being Q3 2009.

GP - 7,830,394 and 7,830,395 are both titled Virtualization of Graphics Resources: Apple's granted patent generally relates to computer graphics, and more particularly to virtualizing resources for computer graphics.

GP - 7,831,784 titled Managing Purgeable Memory Objects: Apple has been granted a patent relating to OS X. Specifically, the patent details a system and method of managing purgeable memory objects includes a LIFO and/or FIFO queue for volatile memory objects, which can be emptied at a rate that matches the speed of a page queue.