Therefore, traditional authorization mechanisms do not provide a simple, elegant and convenient method for mobile devices to share data securely.

According to certain embodiments of the invention, a securing mechanism is provided to authenticate communications between separate devices based on physical pairing. Two devices may be paired when placed close to each other within close proximity to perform authentication via a pairing message (or message-based pairing). Proximity sensors may be employed to ensure physical proximity thus adding a layer of security for pairing. In one embodiment, proximity sensors may include an IR LED (Light Emitting Diode) and/or an IR cell. The proximity sensor could include both an IR transmitter and an IR receiver. For example, two iPhone mobile devices with proximity sensors may detect each others' IR signals when placed face-to-face at about an inch (or less) apart. In one embodiment, two iPhone mobile devices vibrate to confirm pairing (e.g. complete message pairing or device pairing) when placed face to face for a short period of time (e.g. a second or two). Once paired, two applications, e.g. Facebook applications, running separately in two mobile devices may be paired sharing a photo. Typical usage for device pairing may include "pick and go" within seconds. 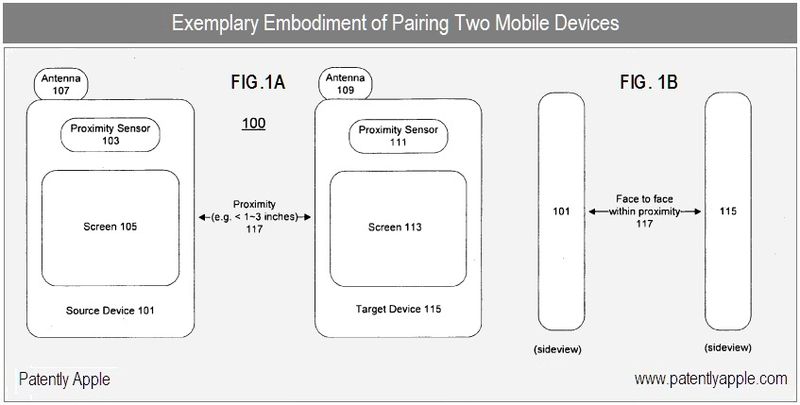 Web sharing may be illustrated with user experiences described such as: I'm back from a trip to Vegas, with a great new private MobileMe album." I meet Alex, and I want to share pictures with him. In a photo application on my iPhone device, I push "Instant Share" and hold my iPhone out." Alex switches on his iPhone and holds it against mine." The two phones vibrate after a second or two to signal the completion of the pairing," Alex's phone launches a photo application and starts browsing my MobileMe album. Bluetooth network sharing may include exchanging Bluetooth key over IR signals (or IR pairing) to initiate a regular Bluetooth network connection (or Bluetooth pairing) without tedious user interactions entering network keys.

Social network sharing may be illustrated with user experiences described such as: Jessica and John meet and want to become friends on Facebook. Jessica opens the Facebook application on her iPhone device, chooses "add immediate friend" and holds out her iPhone. John holds his iPhone against Jessica's without even the need to launch the Facebook application. The two iPhone exchange IR data then vibrate or beep to signal the pairing. Jessica sees John on her friends list on her iPhone. John's iPhone launches Facebook application, and when it's done opening, Jessica appears in the application. Personal information sharing may be used to track, authenticate and/or tag a record, such as to authenticate in-person package delivery. 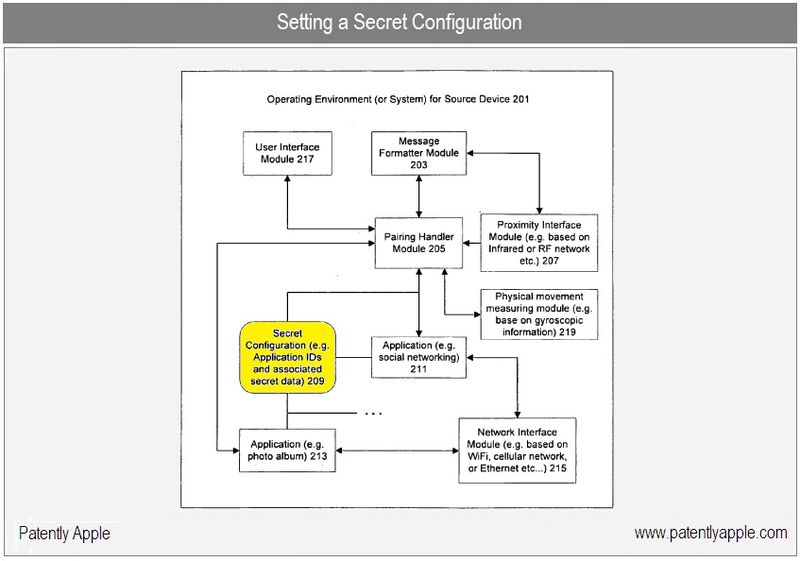 A password may be required to login into a web server, to make a network connection or to execute other tasks for an application. In some embodiments, a secret includes a randomly generated challenge for authentication. The pairing handler module (#205) may generate a random number on the fly during runtime as a secret (or a part of a secret) for the message formatter module (#203) to compose a pairing message. In one embodiment, a physical movement measuring module (#219), e.g. based on gyroscopic information from an accelerometer, records a trace of physical movements (or motions) and/or generate a representation of the trace on the fly. 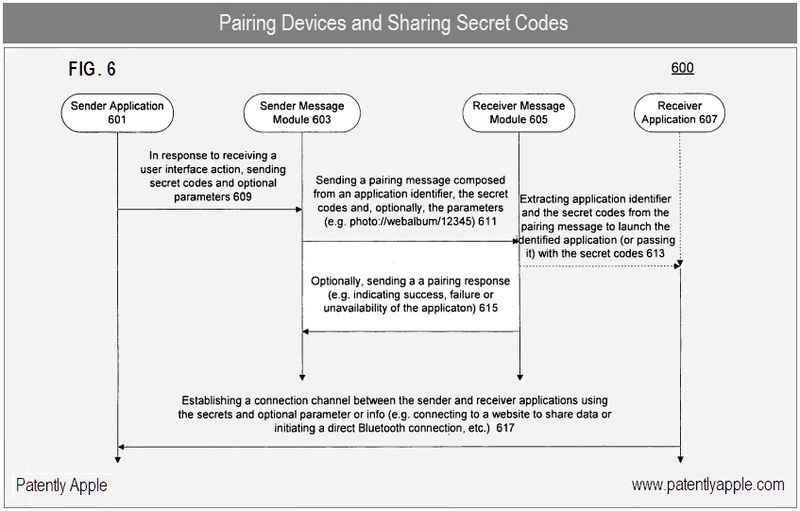 In Apple's patent FIG. 6 noted above we see a timing diagram illustrating exemplary sequences to pair a nearby devices located within close proximity. Sequences 600 may be based on mobile devices such as a source device 101 and a target device 115 of FIG. 1A. A sender application 601 may be running in a source device which detects presence of a nearby target device (e.g. portable or stationed). The sender application may present a user interface for a user of the source device to confirm a pairing request with the detected target device. At sequence 609, in response to receiving a user response, the sender application 601 may send secret codes and optional parameters for pairing operations to a sender message module 603. The secret codes (e.g. a password, a random challenger etc.) and options parameters (e.g. URL, network addresses, session identifiers etc.) may be required for pairing operations to pair with the sender application 601. Apple's patent FIG. 7 noted above is a block diagram illustrating one example of user interfaces presented for pairing nearby devices located within close proximity. Both devices may include proximity sensors 703 and 709 to enable presence detection when placed in proximity to each other. In one embodiment, both devices are running social network applications as indicated on displays 705 and 713. In one embodiment, once pairing operations are completed, devices 701 and 711 alert users by vibrating the devices and/or giving out special audio tones.

For more details about this in-depth patent, read patent application 20100278345 which was originally filed in Q2 2009. Apple credits Thomas Alsina (Paris, FR), Guy Tribble and Philippe Champeaux (Paris FR) as the inventors of this patent application.

Patently Apple doesn't generally report on old or continued patents, but a number of continuation patents surfaced today that we'll pass along. There were three continuation patents covering "Remotely Locating and Commanding a Mobile Device" under applications 20100279675, 20100279652 and 20100279673. There was another titled "Embedded Access Information for Digital Versatile Disc (DVD) Independent of DVD Player Software" under application 20100278513 and finally one titled "LED Selection for White Point Control in Backlights" which was published under application 20100277410.