Apple Dreams up a New Way of Charging Cold Batteries 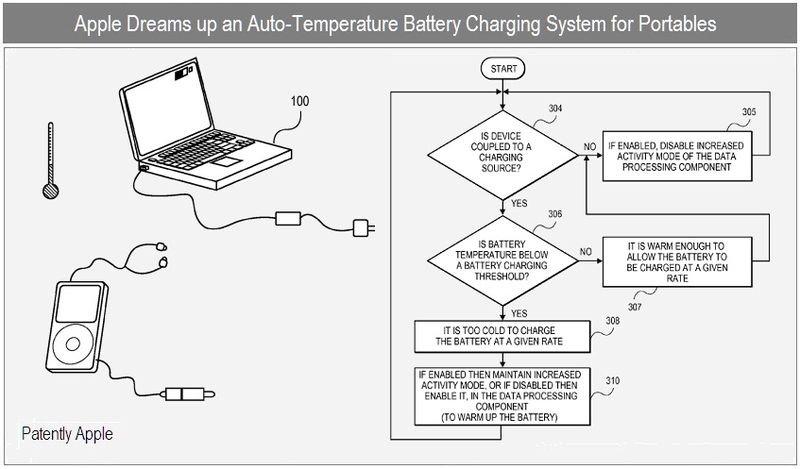 I don't know about you, but sometimes the geekiest and littlest of inventions seems to turn my head. One of today's published patent applications is a case in point. It's a simple idea that makes you wonder why no one has ever come up with this before. Apple has figured out a way to use the heat of the CPU of one device to power up another device's battery which is dangerously cold – so that you could power up your dying devices safer and quicker.

Consumer grade portable electronic devices such as the iPhone, MacBook and/or dedicated navigation devices typically use lithium ion, Li-ion, or lithium polymer, LiPo, based rechargeable batteries as their primary power source. Such batteries have relatively high energy-to-weight ratios, making them well suited for portable applications. However, they are more "delicate" than other battery chemistries. In particular, to maintain their longevity or reliability, most Li-ion cells should be charged at a lower current when the cell temperature is down at 5 degrees Celsius or 41 degrees Fahrenheit or colder. In addition, charging at below freezing is to be avoided because permanent damage to the internal structure of the cell could occur. For this reason, a typical portable electronic device has a temperature sensor and a charging circuit that automatically prevents its battery from being charged when it is too cold. Thus, for example, if a user has left the device in his car overnight while the ambient temperature has dropped to below freezing, it may take a long time before the battery is fully charged.

Apple's patent/invention covers portable electronic devices that could better manage their task of charging a battery at low temperatures. The devices have a controller that could detect when the devices are coupled to an external power source, and that a temperature of the device is too low (for purposes of charging the battery, for example at a given charge rate).

In response, the controller signals a data processor (or other suitable electronic circuit component of the device that can generate sufficient heat to warm up the battery) to increase its activity. In other words, the data processor is signaled to increase its power consumption, by for example entering into a special execution subroutine or a typical application that tends to be power-hungry, to generate more heat in the device and thereby raise the overall temperature of the device more quickly.

The controller may allow this increase in activity to persist, until the battery is brought up to its charging cutoff or other threshold temperature, at which point the charge current can be increased (to for example its nominal or room temperature level). This may be expected to result in the battery becoming fully charged more quickly while reducing the risk of long-term damage to the battery. In addition, the process may occur without requiring the user to take any action other than coupling the device to the external power source.

In another embodiment, the controller adjusts the increase in activity or power consumption of the components that are acting as heaters (while the battery is being charged) so that power consumption by the rest of the device remains less than the total available power from the external power source. In this manner, where the external power source has a relatively limited amount of available power, at least some of that available power is steered to the battery. This ensures that the battery is receiving a net positive charge, despite being asked to simultaneously power the rest of the device (including the components that are being "overdriven" to act as heaters).

The controller may also be given more granular control of, in effect, how much of the available power is diverted to power the components that are acting as heaters, and how much is diverted to charge the battery. This may be based on monitoring the temperature and signaling a battery charging circuit that can vary the charge rate. For example, the charging process may be begin by diverting more power to increase activity of the components and then as the device warms up, the increase in activity of the heater components is gradually reduced, in favor of gradually increasing the charge rate.

An Overview of the Components Relevant to the Invention

Apple's patent FIG. 2, is a detailed look at one implementation of the above-described process is taken, based on a block diagram of an example portable electronic device 100 showing several of its relevant functional components. 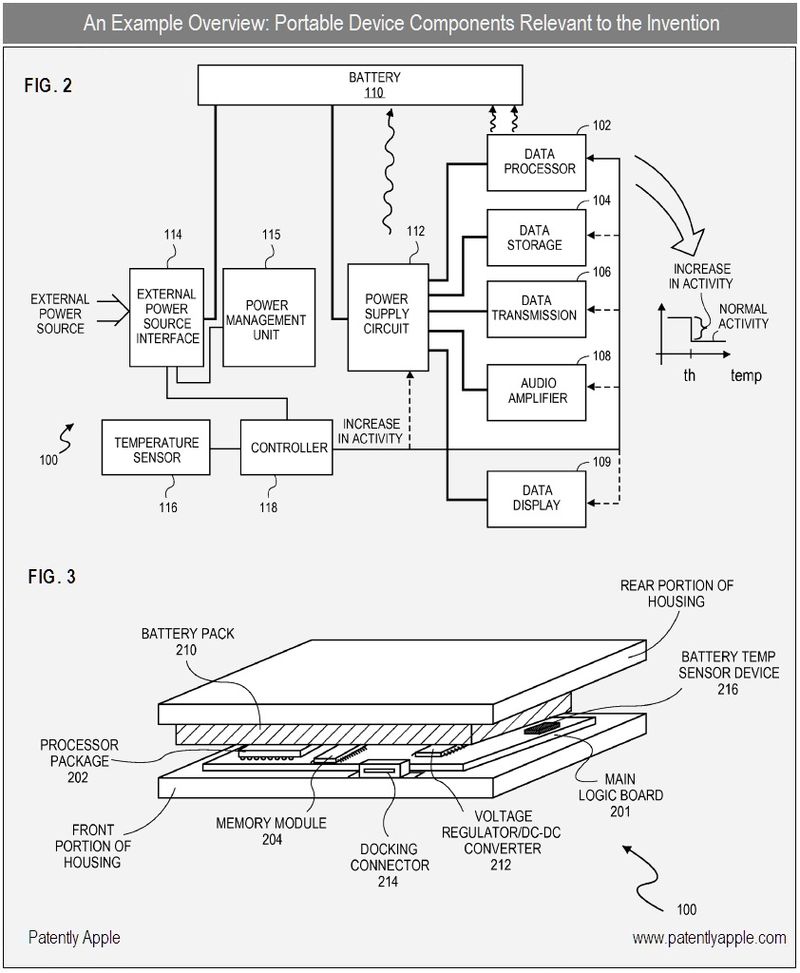 In Apple's patent FIG. 3 shown above we see a cut away view of an example portable device 100 (which could be an iPhone, MacBook or other device) showing several of its relevant physical components. This may be a typical arrangement, where the device is composed of a housing that includes a rear portion and a front portion between which there is a stack-up of the physical components. In a typical scenario, a battery pack 210 lies closer to the rear portion of the housing, and a main logic board 201 lies closer to the front portion. The main logic board may have, facing the battery pack 210, a number of relevant physical electronic circuit components installed on it, including a processor chip or package 202, a memory module 204, a voltage regulator/dc-dc converter package 212 (which may be part of a power management unit chip), and a battery temperature sensor device 216.

Patent FIG. 3 also shows us an example docking connector 214. The battery charging circuitry is not shown. In such a typical arrangement, two of the components that may be selected most often for the task of acting as heater components, may be the processor package 202 and the voltage regulator/ dc-dc converter, as these would be able to generate a substantial amount of heat when stimulated appropriately and are relatively close to the battery pack. The battery temperature sensor device may also be installed on the main logic board but should be located relatively far from the processor package and the voltage regulator/ converter, so that it could be more effectively and independently used for detecting the temperature of the battery pack.

The Heart of the Patent: An Automatic, Low Temperature Battery Charging Process

At the heart of Apple's patent we see FIG. 4 below which illustrates a flow diagram of an automatic, low temperature battery charging process. The process may be performed by the controller 118 (see FIG. 2). The process begins with operation 304 in which it is determined whether the device is coupled to an external power source, for purposes of charging the battery. Thus, in the embodiment of FIG. 2, the controller would be able to, for example, poll or receive an interrupt from the external power source interface 114 as to whether or not the external power source is connected, and the charging circuit (not shown) is otherwise ready to begin charging the battery.

The first patent of interest is 0100277337 Titled "Directional Touch Remote." Here's a temporary link to that patent. The second patent of interest is 20100277603 Titled "Image Capture Device to Minimize the Effect of Device Movement." Apple's inveniton relates to digital imaging; and more specifically, to stabilizing captured images. Here's a temporary link (2) to that patent. The third patent of interest is 20100281415 Titled "Three State Icon for Operations." One of the things you should note about this patent is that it isn't new - even though everything screams that it is. Yet if you  take a closer look at Apple's Claims area, you'll quickly learn that Claims 1 through 28 were "cancelled" - a clear give away that it's not a new patent. Furthermore, the icon in question appears to be nothing more than the Burn Disc icon. It's been so long since I'm burned a disc that I almost forgot about this icon. Temporary Link 3. 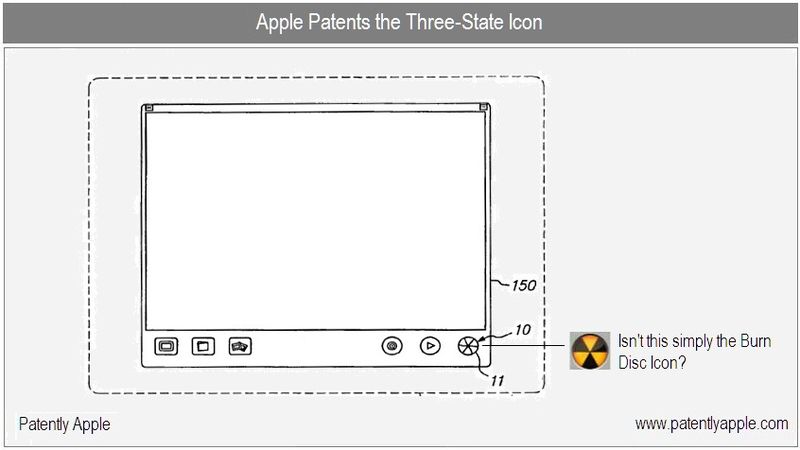 Temporary links only last a few days. If and when a link leads you to an unwanted patent, simply feed the appropriate patent number listed above into this search engine.