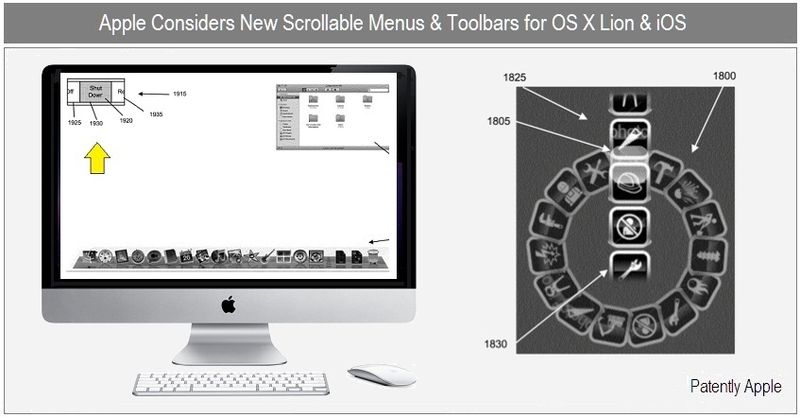 During a recent Special Event, Apple's CEO Steve Jobs provided us with a peek into four key attributes coming to the next major operating system upgrade due next summer called "Lion." Specifically, Jobs reviewed the fundamentals of Lion's Mac App Store, Launchpad, Full Screen Apps and Mission Control. What Jobs didn't reveal was something called "scrollable menus and toolbars." This possible new OS X Lion feature came to light late last week in a new European patent filing. The new feature is clearly identified as one being designed for both the desktop (OS X) and handheld devices (iOS) – which is what OS X Lion is all about: "The Power of OS X – The Magic of iPad." Apple's Full Screen App feature is about simplifying the desktop and their latest scrollable menus and toolbars concept extends upon that very thinking.

Such toolbars, tool palettes and drop-down menus could take up valuable real estate in the graphical user interface. Furthermore, the number of items in such menus and toolbars is limited by screen space. For example, a user doesn't want a floating tool palette that takes up too much of the screen. As more options are added to a tool palette, the tool palette must get larger or the size of the options must get smaller. Just as the tool palettes could only increase in size to a certain point, the size of the options could only decrease to a certain point before they become indistinguishable. As such, a need exists for ways to display toolbars or menus that don't take up significant amounts of screen space while keeping the options at a visually recognizable size.

Novel Methods of Presenting a Menu 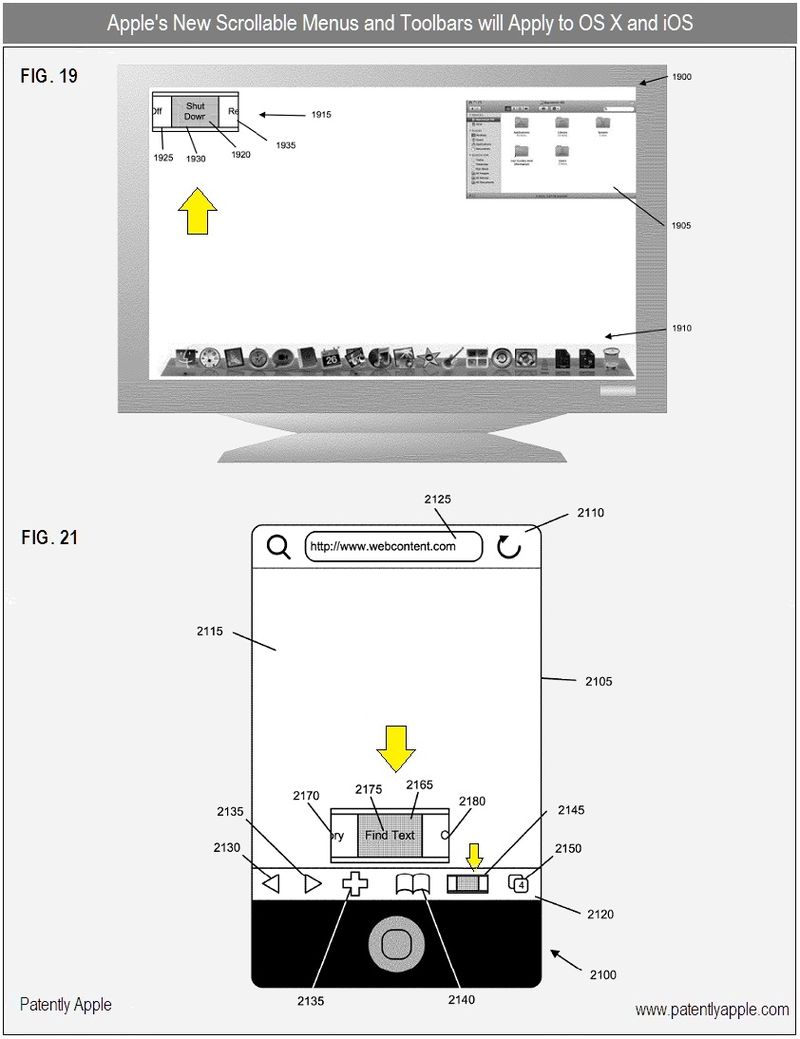 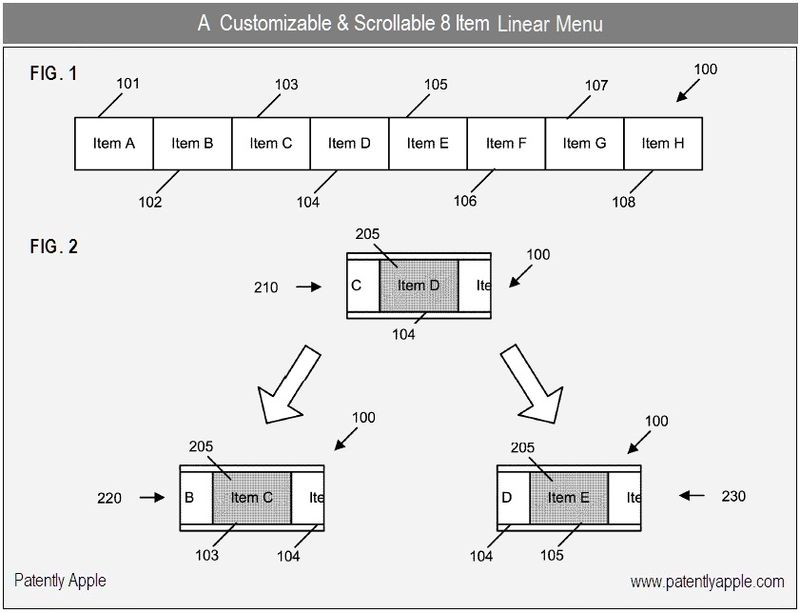 The nature of the scrolling could be in two different forms in some embodiments, depending on how the items are ordered. In some cases, the menu items can't scroll past the first and last items in the order. In other cases, however, the items could be continuously scrolled in a loop as the ordering of the menu items is only defined relative to one another, and there is only a first item to the extent that there is an item that is initially displayed in the selection window. 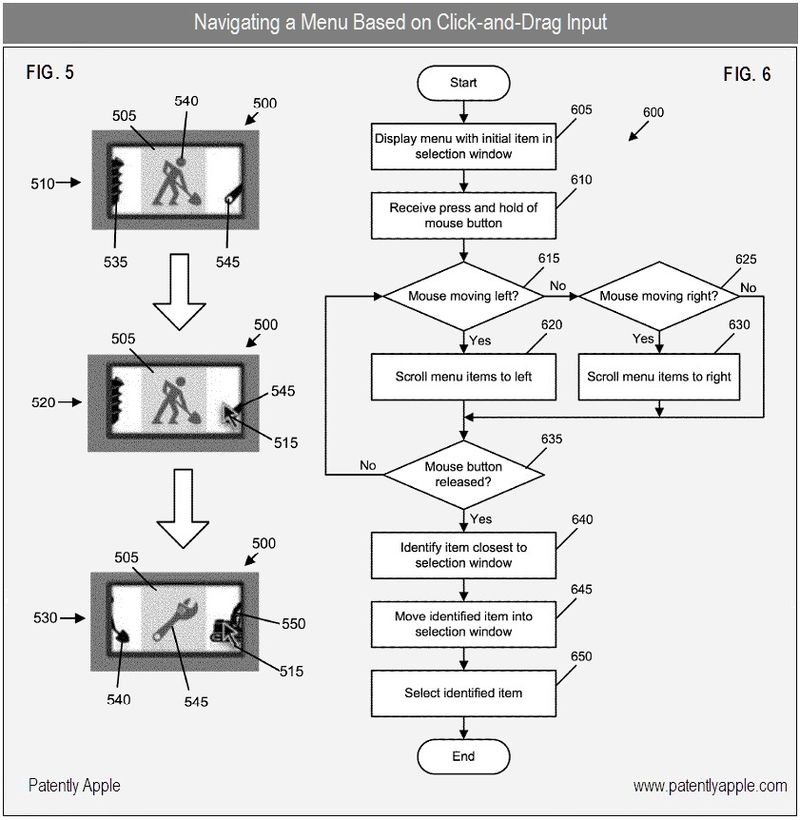 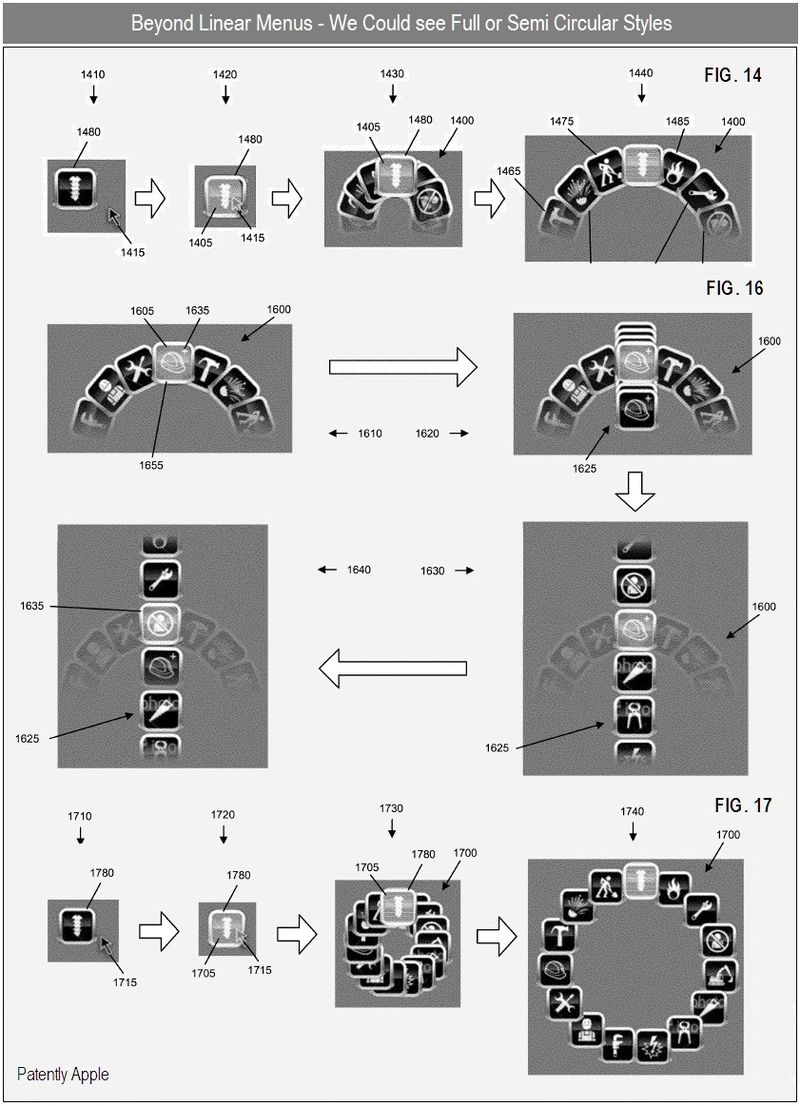 The menu also might be presented differently in different embodiments in that some embodiments display the menu constantly at a set location, whereas other embodiments require user input to invoke the display of the menu. For example, the menu might be a toolbar in a media-editing application that occupies a particular location in the user interface of the application, or a menu in an operating system that is invoked by a keystroke.

Different embodiments provide different schemes for navigating through the menu items. In some embodiments, users could click over the displayed items on either side of the selection window in order to cause the next item in the menu order to move into the selection window. Alternatively or conjunctively, in some embodiments, users could scroll the menu items by using various forms of sliding or swiping input (e.g., dragging a mouse). In some cases, the menu items are displayed as moving in large, discernible steps; while in other cases the items are displayed as moving in small steps that make the movement appear smooth.

Apple's patent Figure 20 shown below illustrates a video-editing application 2000 that is used to create composite video presentations and that utilizes the new scrollable menus. The video-editing toolbar 2020 is an example of the use of the menus described above. Specifically, toolbar 2020 provides the user with multiple trimming tool options. 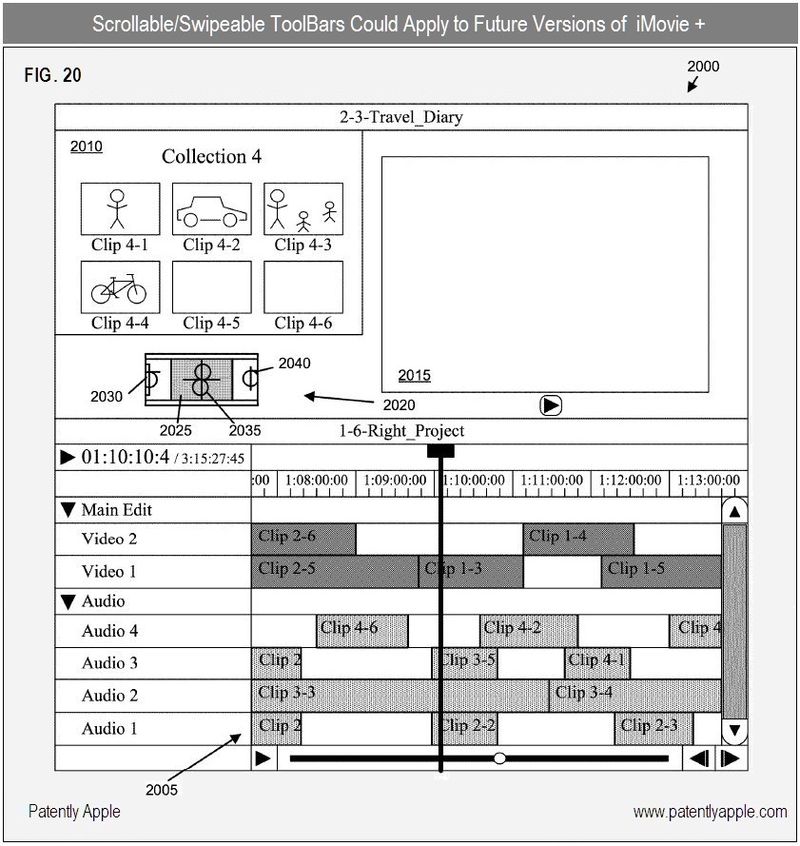 Apple credits Egan Schulz and Tom Langmacher as the inventors of this International Patent Application, originally filed in Q2 2010 and published November 4, 2010. Patently Apple would like to thank David Borel of Switzerland for emailing us about Apple's new patent application. 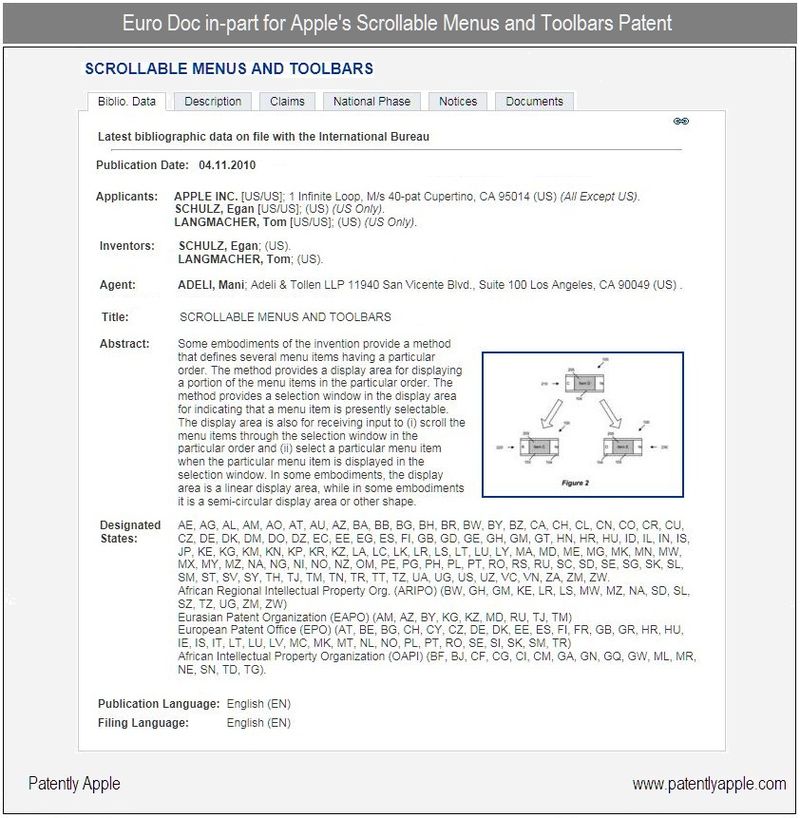 Why is this so complicated for some people to digest. Imagine being on your iPad and having a single tool icon on your nice full-screen app. You touch it and it automatically fans out in a circle. Your finger glides around the circle until you have the tool you want and when you lift your finger, the tool-circle springs back to being a simple single icon and you have the tool you want. That's so Apple and that's so cool.

Thanks for your comment Mike because others may hold this view as well.

First off, the report clearly states you'll be able to use text or icons depending on the applications: "The menu items may be displayed as standard text items in some embodiments (e.g., "File", "Save", "Print", etc.) or may be displayed as icons (e.g., icons representing various tools, such as drawing tools, video editing tools, etc.)."

Secondly, the patent is using "generic tool" icons to make the point that icons could be used. So I wouldn't try to read too much into this Mike as it's just for illustrative purposes. In fact, you should have a sense of humor about this - as the engineers are having fun using "application tools" in the form of "work tools" to get their point across.

Ooooooh, this is dreadful - it's the "pictures make things easy" monster.

Yes, if you're about four years old, a picture makes things much easier. But if you're a bit older, pictures are more confusing than helpful. There's only so much you can do with a tiny square of space, so most pictures end up vague, ambiguous, and confusing.

I know. I work with it. It's one of the things I hate about Windows 7 and the latest version of Office for Windows. And unlike the current Mac toolbar, Office doesn't have a text plus image or text-only option, only pictures. It confirms my belief that the Windows UI is developed by 4-year-olds in a Redmond preschool hidden on the corporate campus.

Is this 'pictures make things easy' nonsense finally coming to OS X? Ugh! Let's hope not, or at least let's hope the graphics above are wrong and there's a text-only option like the current toolbar.

Why? Because I can read far faster than I can guess what a childish picture of a hard hat, a bicycle or a saw means. Does anyone know what they mean in the above illustrations?

I rest my case.