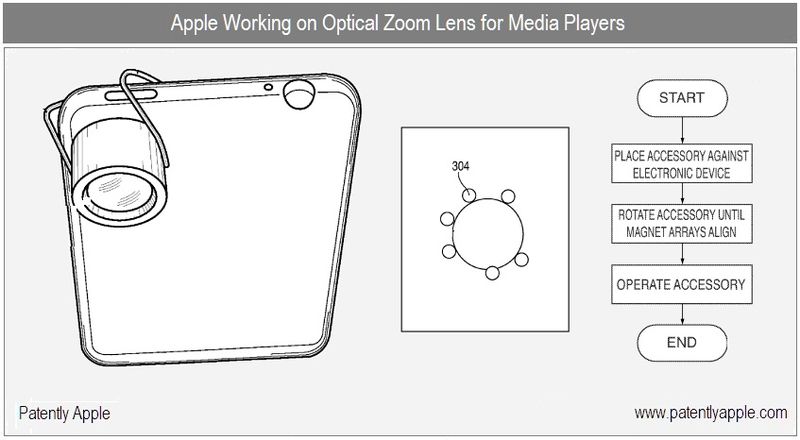 Apple has just introduced their new iPod touch with an HD cam for both video and point and shoot style stills and according to a new patent application published this morning by the US Patent and Trademark Office, they're already working on a new zoom lens accessory. While the patent presents several methods of attaching a zoom lens to a media player like the iPod touch, the main focus is on utilizing an advanced magnet array coupling approach that could actually be personalized to reduce the risk of theft. Other accessories using this technique could include mini speakers or another kind of microphone. Just the mere idea of Apple introducing advanced zoom lenses for their leading world class media players has got to have competing camera OEMs choking on their morning coffee.

According to Apple's patent, a user will be able to enhance the functionality of a media player by connecting one or more accessories to it. Different approaches could be used to couple the accessory to an electronic device. For example, one or more mechanical fasteners, clips, adhesives, hook and fastener material (e.g., Velcro), latches, bands, or other fasteners could be used to connect the accessory to the electronic device. 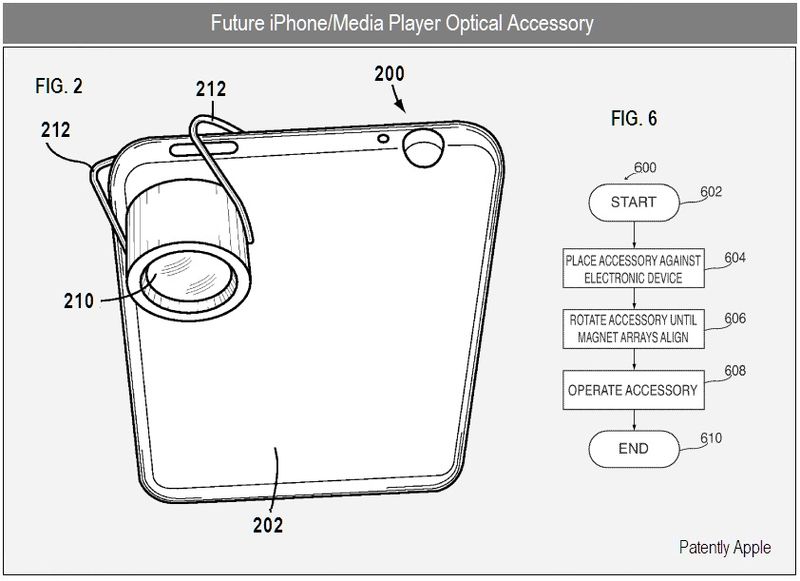 As an alternative or smarter approach for at least aligning an accessory to the media player, a magnet array could be used. Apple's patent FIG. 3 shown below is a broad schematic view of a media player and an accessory coupled using an illustrative magnet array. Media player 300 could include port 302 in housing 301. The port could include an opening in the housing through which one or more interfaces could provide or receive information. For example, port 302 could provide an opening for a camera lens, an electronic connector (e.g., a 30-pin or a USB connector), audio output circuitry (e.g., speakers), a sensing mechanism, or any other suitable interface. Accessory 310 could be positioned over the port to enhance the use or features of the interface positioned within the port. 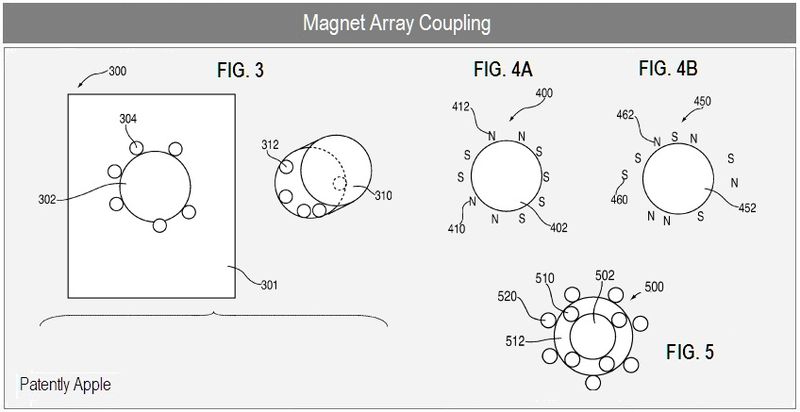 The polarity of the magnets of magnet arrays could vary in any suitable manner as illustrated above in patent figures 4A and 4B.

In some embodiments, a user could instead or in addition define the physical distribution of magnets within the magnet array. Apple's patent FIG. 5 noted above is a schematic view of an illustrative magnet array that could be personalized. Magnet array 500 could be positioned around the periphery of port 502. To allow the user to change the physical distribution of magnets, the array could include first set 510 of magnets and second set 520 of magnets, where the magnets of each of sets 510 and 520 are positioned at different distances from the center of the port. The user could personalize the magnet distribution by moving one or more magnets from each of sets 510 and 520. For example, the user could select individual magnets to displace.

Duplex Audio for Mobile Communication Device and Accessory: Duplex audio is provided for the iPhone and an accessory (shown to be a boombox). The accessory could selectively operate in a duplex audio moe, concurrently sending audio to and receiving audio from the iPhone, or in another audio mode. In duplex audio mode, the accessory could enable its internal audio processing operations (e.g. echo cancelation) while the iPhone disables its corresponding internal operations or vice versa. For more information see patent 20100227643.

Audio Preview of Music: Apple's patent is about providing an audio preview of songs and other audio elements. An iPod could provide a user-controllable pointer scrollable through various categories, such as different genres or artists. Responsive to each movement of the pointer, the iPod could select a song from the pointed-to category and could play a portion of the selected song. In other embodiments, music groups could be defined, where each music group includes sons that go well together. The iPod cold play, in succession, a portion of one song from each of the music groups. Responsive to a user selection of a playiing portion, the iPod could create a playlist based on the music group of the selected playing portion. For more information, see patent 20100229094.

Patent 20100228549: Systems and Methods for Determining the Language to use for Speech Generated by a Text to Speech Engine

Patent 20100224401: Methods and Apparatus for Sheilding Circuitry from Interference (EMI)

For additonal information on any of the patents noted above, simply feed the individual patent numbers into this search engine.

Notice: Patently Apple presents only a brief summary of patents with associated graphic(s) for journalistic news purposes as each such patent application is revealed by the U.S. Patent & Trade Office. Readers are cautioned that the full text of any patent application should be read in its entirety for further details.  About Comments: Patently Apple reserves the right to post, dismiss or edit comments.

Excellent idea and knowing Apple they'll create a cool way to attach it. Patent graphics just convey the idea. How Apple will actually implement this will be what makes it a hit. The original iPhone patent graphic looked as if the phone would be a 3" box. What we got was slick. So again, graphic aside, this will fly for those who want to be able to zoom on something while on holiday without having to lug around a camera case and lenses.