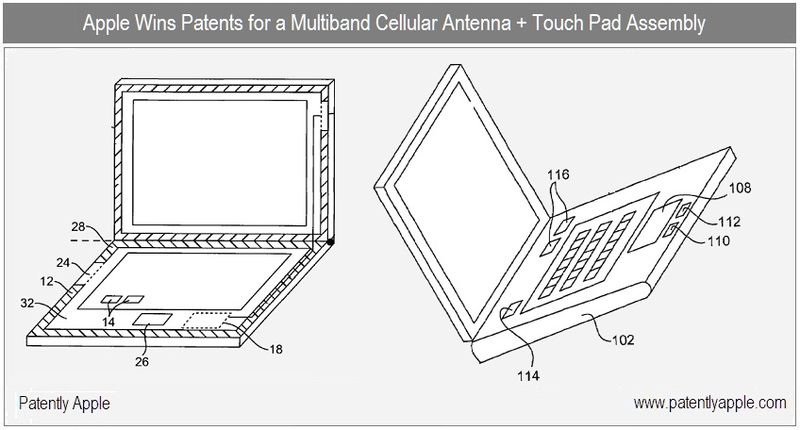 The US Patent and Trademark Office officially published a series of 17 granted patents for Apple Inc. today. Amongst them are several major design patent wins pertaining to the original iPod touch and the all-metallic iMac which has received registered status in both Europe and China. Yet the most notable granted patents issued today in our opinion would have to be one that relates to Apple's notebook trackpad assembly and perhaps more importantly, two strategic patents relating to the notion of a future telephonic MacBook.

In August 2010 Patently Apple presented you with a report concerning a "Telephonic MacBook." In today's round of granted patents, we find that there are two new patents that support a future telephonic Macbook. In the first granted patent titled "Antennas for wireless electronic devices," we see the door open for 3G or future LTE to be built-into a MacBook. The patent first points to 3G for a notebook and then states that "cellular telephone communications could be handled using a multiband cellular telephone antenna and local area network data communications could be handled using a multiband wireless local area network antenna. 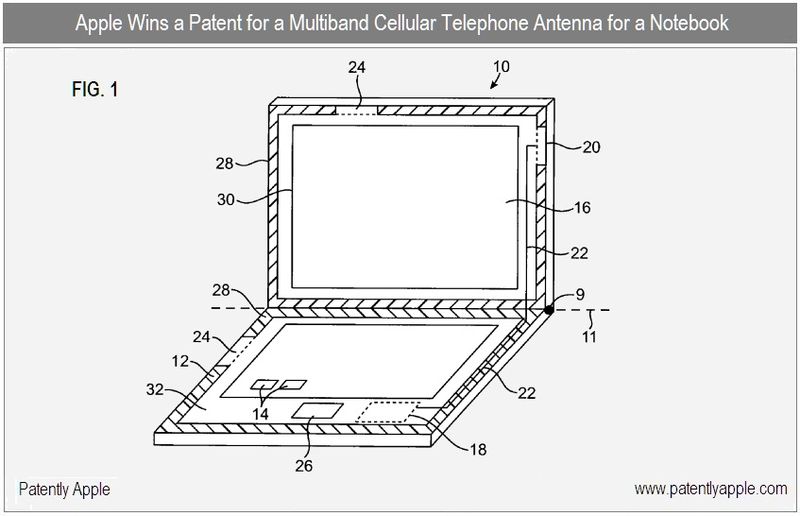 Apple credits Bing Chiang, Douglas Kough, Enrique Ayala Vazquez, Eduardo Lopez and Gregory Springer as the inventors of Granted Patent 7,804,453 originally filed in Q2 2008. Douglas Kough also worked on the telephonic MacBook that we reported on in August and in the next patent presented below.

This second Apple patent discusses an antenna-carrying assembly which relates to various wireless modes including CDMA2000. While Apple may have implemented this technology into their iPhone first, the actual context of the patent's background is about a PC card for a notebook. As noted earlier in this report, the technology behind a future telephonic MacBook is beginning to mount. 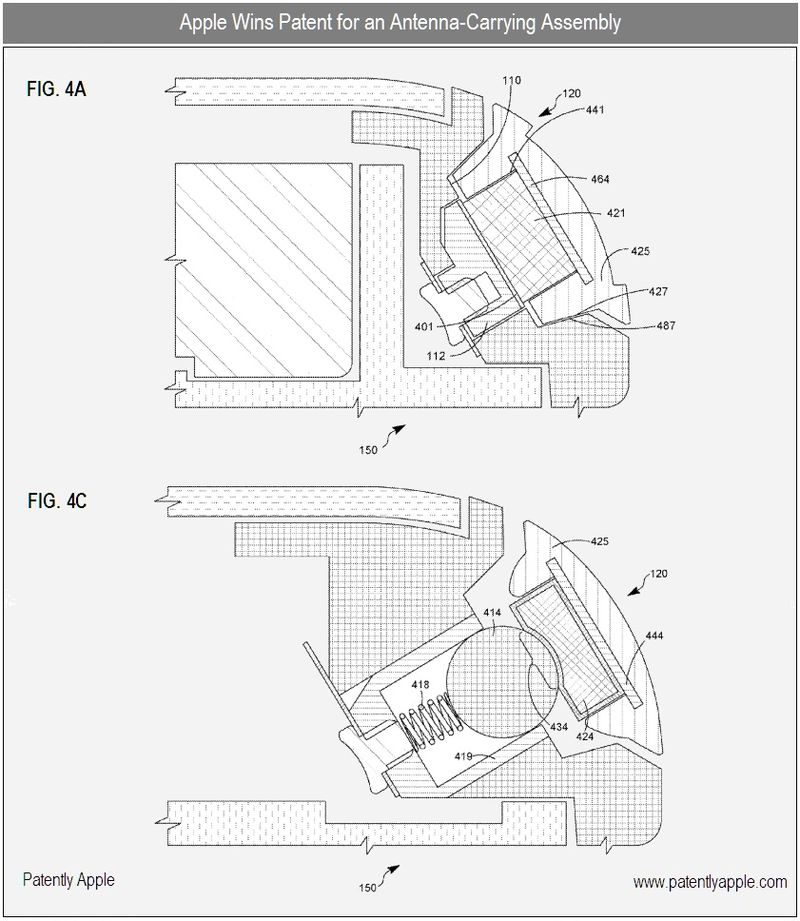 Apple has won a patent for improved housing for their notebooks which dates back to 2001. Although the MacBook housing has changed dramatically since then, the fact is that this patent is part of the MacBook's evolutionary process. According to Apple, the improved housing is provided with one of an illuminable connector, a touch pad arrangement, and a palm rest stiffening plate. Normally, the illuminable connector and the touch pad arrangement are provided on external portions of a housing of the computing device such that they are available for user interaction. The palm rest stiffening plate is provided internal to a housing to provide stiffness or rigidity to a palm rest region of the housing. 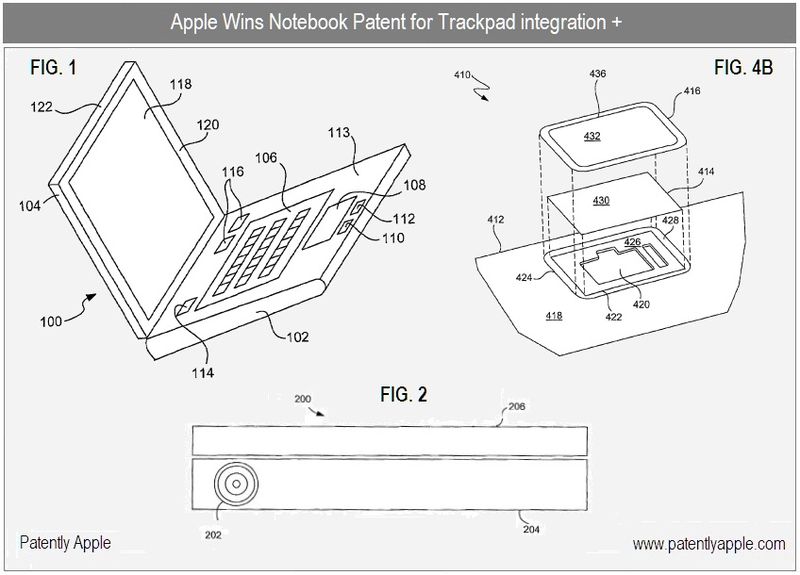 Apple's patent FIG. 2 illustrates an illuminable connector arranged on a notebook FIG.1. Apple's patent FIG 4B is a diagram of a side view and a perspective view of a touch pad system. Apple credits Thomas Acampora and Kevin Fetterman as the inventors of Granted Patent 7,804,487 originally filed in Q4 2001. 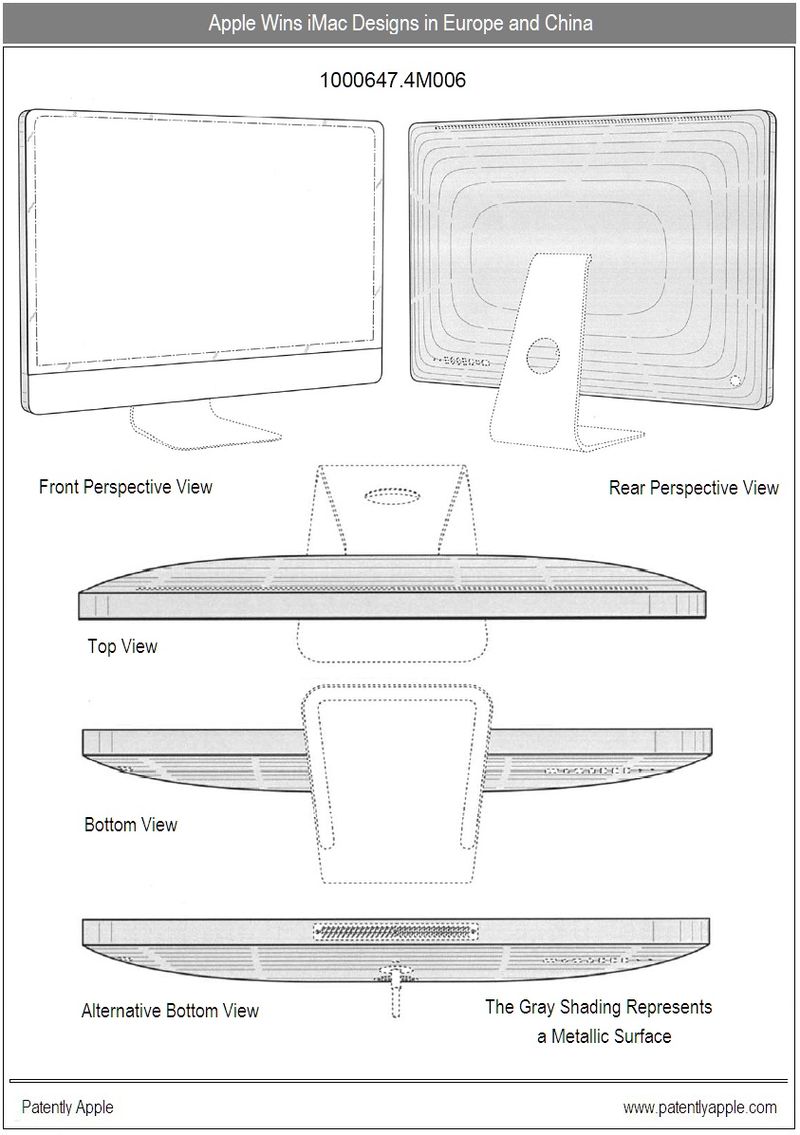 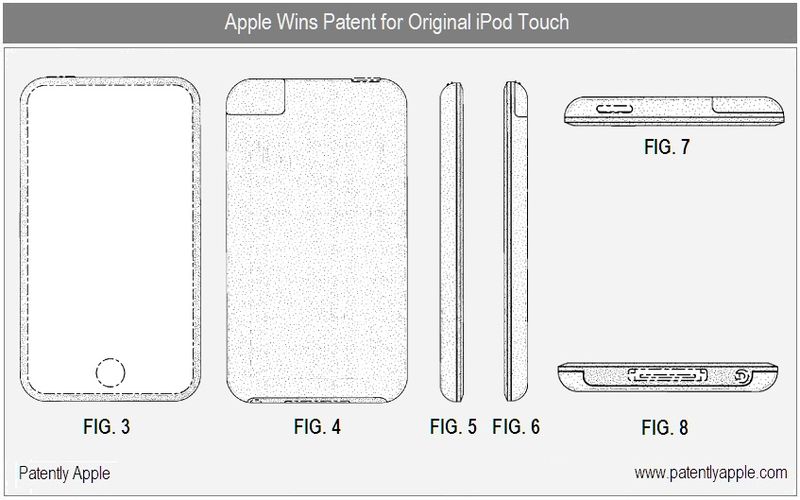 Apple has also won two additional design patents this morning including one for the iPhone's calendar UI under D624,555 and another for the Nike + iPod UI for the iPod touch under D624,556.

GP - 7,804,897 - Method for implementing an improved quantizer in a multimedia compression and encoding system

Bravo for Apple! These patents will allow Apple to rely less on other vendors technologies for wireless/cellular connectivity.

A phone on a MacBook, if it were not Apple, i would be doubting how this will happen but hey, Apple spins a lot of crazy ideas that makes our digital life more exciting. TO THE CRAZY ONES WHO THINK THEY CAN CHANGE THE WORLD - APPLE!