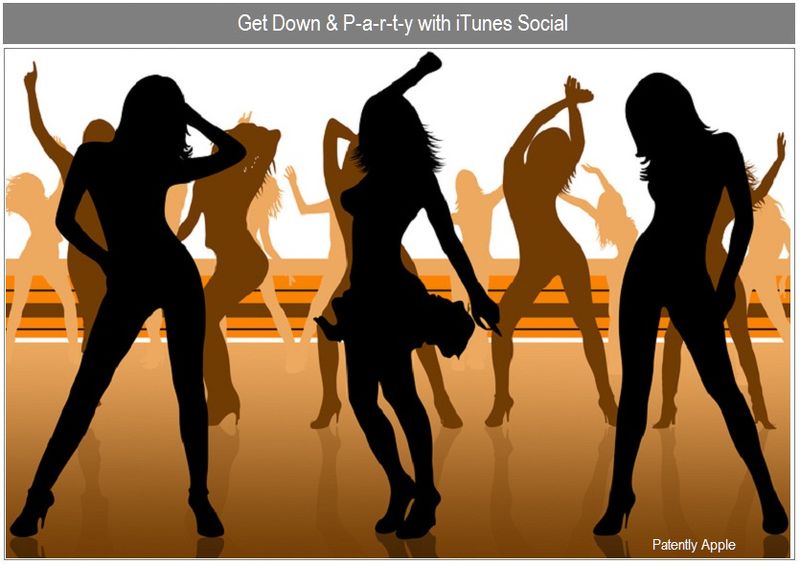 Apple just finished introducing their new Social Network for Music called Ping on the first of September and we're already seeing in one of Apple's latest patent applications that they're thinking about the next great thing which we'll call Social iTunes for the time being. Apple's thinking of a new kind of music service that could work at your own house party or perhaps at your local community hall, bar, restaurant or pub (Cheers!). The system is unique in that it lets your party guests vote on what music that they want to hear and the system tabulates the votes to generate a playlist. You could vote with your iPod touch, iPad, iPhone or any other Apple computer. It sure sounds like Apple wants you to join Ping and then get down and P-A-R-T-Y the night away!

Increasingly media is bought, dispersed, enjoyed and manipulated in digital formats and following this shift, playlists for enjoying the media are also increasingly popular. The use of digital media, especially compressed digital media, has made it possible for users and machines to create playlists easily.

People often use their media playing devices to automatically add music to a queue. In some cases this automatic selection is random, and in other instances algorithms produce more sophisticated playlists that are better suited to a user's tastes. Some of the sophisticated playlist algorithms, could for example, take into account the similarity of songs based on their musical characteristics, or based on the feedback of the population at large, or based of the tastes in music of just one user. In some cases, these playlists could generate a great playlist, but in other situations the playlist might be lacking.

Examples of potential situations where a need exists for a population to exert influence on a playlist include at bars, pubs, restaurants, parties, or social gatherings in general. In each situation, media, such as music, could really enhance the atmosphere of any social event. Whether a jukebox fails to play any songs that a group of patrons enjoy, or a friend at a party cannot put a decent playlist together, these are just a few of the examples when the influence of the local population that is actually listening to the music could make a big improvement. Accordingly, Apple's patent addresses the deficiencies in the art as set forth above.

Apple's patent describes methods and arrangements for facilitating community ranking of items in a playlist as well as host devices and tangible computer-readable media for directing the operations of a host device for performing the same functions. A playlist host device transmits information to a plurality of user devices such as metadata related to media items in a playlist. The metadata includes the order of the playlist, community ranking information, song title, and artist name among other items. The user devices send, and the host device receives, votes related to a media item. The votes could be positive or negative and based on these votes the host device could reorganize the playlist to take into account the preferences of the community, such as a collection of people at a party, restaurant, bar or any other gathering of people.

In some embodiments, the portable devices connect to and communicate with the electronic device over a local area network, which could be utilized by guests at a social gathering, but communications are not limited to this medium. Examples of potential electronic devices include, but are not limited to jukeboxes, home radios, karaoke machines, and personal computers.

Apple's system and method patent is particularly useful for group collaboration in making and managing playlists and is generally illustrated in patent FIG. 2 below. A playlist is hosted by host device 202 which hosts a playlist and could be any device suitable for use in the system. As depicted here, the device could be a jukebox or a personal computer, but the illustration should not be considered as limiting the possible host devices. A community of users could interact with the host device via their portable devices (206, 208, 210, and 212) via any suitable electronic communications medium well known by those in the art (Bluetooth, Bonjour, and Cellular). The portable devices could be an iPhone (mobile phone 206), iPod touch (portable media playing device 208), iPod or iPad (210) a MacBook (212) or any other device capable of electronic communication with the host device. 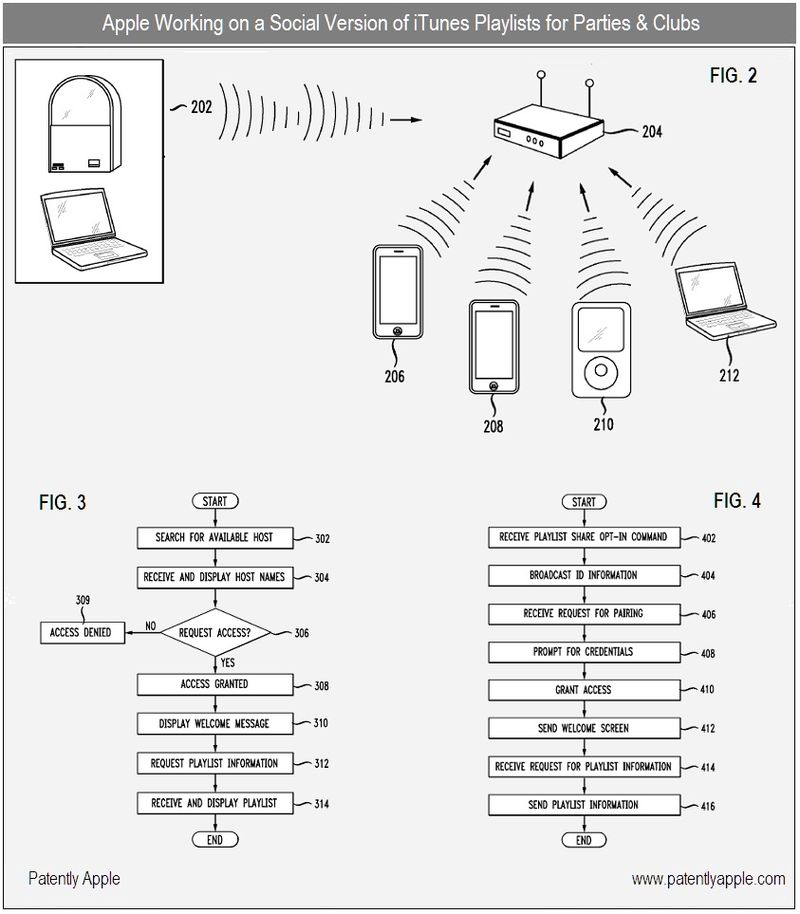 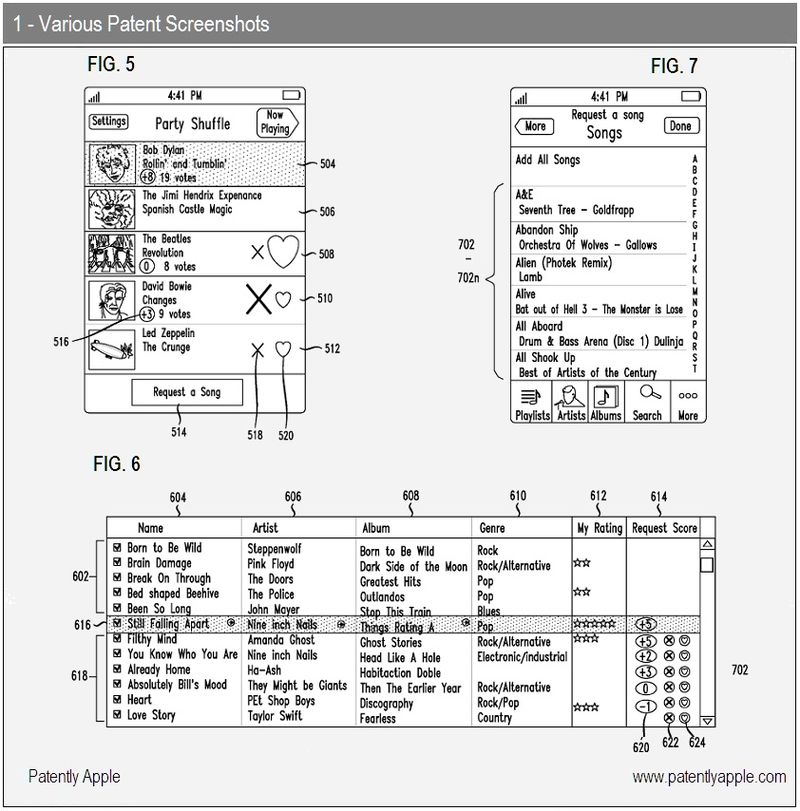 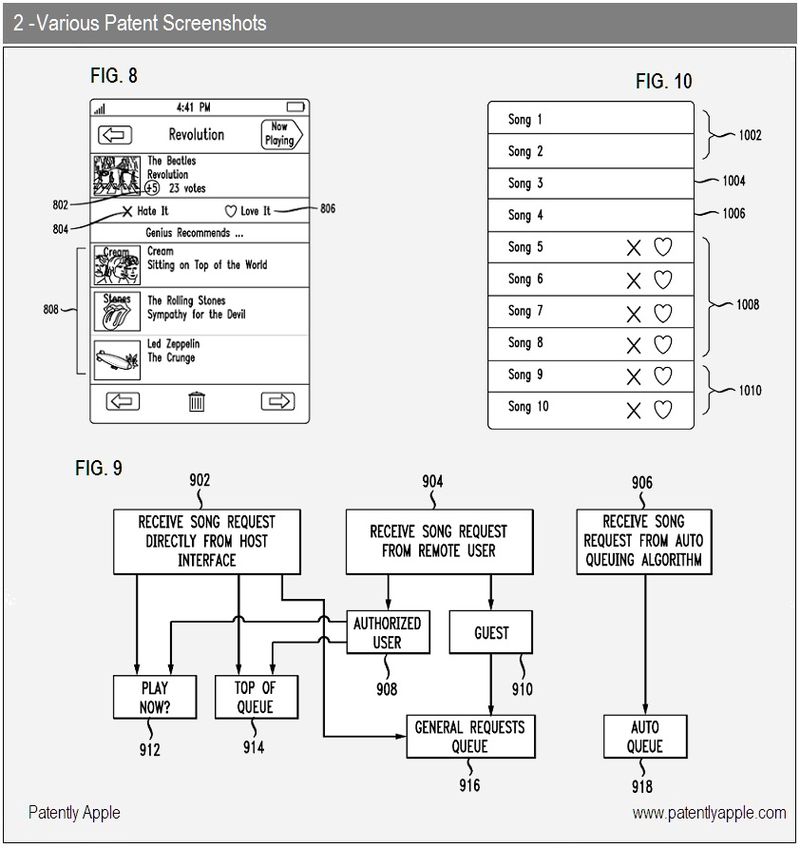 One way to create this party system is to use Apple's iTunes DJ. The patent states that "one example of a dynamically generated playlist is the Party Shuffle playlist or the iTunes DJ playlist in the media management software iTunes which provides a continuous mix of music. Songs could be added to iTunes DJ automatically by iTunes or manually by the user. The user could then reorder songs."

In the introduction we pointed to the "voting" process – but here's an interesting vote taking twist. The patents states that other mechanisms could be applied to affect somebody's vote. For example, a motion detection device within a mobile device may identify that the user is not only voting but perhaps using the mobile device while dancing, walking or in some other fashion that could be connected with the currently played music. In this respect, users could have their vote enhanced based on their participation with the songs that are being played. In other words, those that may have their devices while dancing could have their votes increased in effect which those sitting on the sidelines and not dancing, as would be indicated by the lack of motion associated with their mobile device, may have their votes adjusted accordingly. Oh no, that means that the babes will rule the music on that basis (ha!).