Apple Seeks to Perfect the Audio Jack for Nano Devices

Apple's engineers are obviously seeking to perfect the Audio Jack for both present and future nano and wearable computer devices. In July an Apple patent pointed to the work being done in respect to a contactless optical sensor centric Audio Jack and again in August we learned of Apple's research and development into an Audio Jack with a built-in Mic. In Apple's third patent of the year, as was revealed by the US Patent and Trademark Office this morning, we can clearly see that Apple is working on a new Audio Jack using pogo pins to provide conductive contacts in an effort to meet the needs of ever shrinking devices.

Many electronic devices include audio jacks for providing audio to portable devices. Audio jacks include several conductive pads operative to contact audio plug contact portions or regions to provide electrical paths through which audio signals, power signals, and data signals could be transferred. The conductive pads typically could be formed from stamped sheet metal and could be shaped in a manner to ensure electrical contact and retention when an audio plug is inserted in the audio jack. Suitable shapes could include, for example, cantilever beams extending into an audio jack cavity and operative to deflect away from an audio plug when the audio plug is inserted in the audio jack.

The cantilever beam, however, could take up large amounts of space within the audio jack assembly. In particular, a cantilever beam could require a substantial minimum length for ensuring that the force generated by the beam deflection is sufficient to maintain the beam in contact with an audio plug contact portion. In addition, the cantilever beam requires space in at least two dimensions, which could prevent the size of an electronic device from being reduced. This can especially be an issue for electronic devices so small that the audio jack size effectively determines the size of the device.

According to Apple, the audio jack could include a cavity into which an audio plug could be inserted. A series of pogo pins could extend into the cavity to provide conductive contacts for audio plug contacts. When an audio plug is inserted in the audio jack, the deflectable tips of each pogo pin could sequentially deflect to allow the audio plug to be inserted into the cavity. The end of the pogo pins opposite the deflectable tips could be coupled to an appropriate electronic device component to transfer signals, such as a printed circuit board, flex circuit, cable, or any other suitable component.

And lastly, according to Apple, the pogo pins could have any suitable dimension. In particular, the pogo pin dimensions could be selected based on the size of the audio plug contact portions, the distance between the audio jack cavity and an electronic device component, or any other criteria. In some embodiments, a characteristic dimension of the deflectable tip (e.g., a diameter or radius of the tip) could be less than the maximum amount by which the deflectable tip could extend into the cavity. 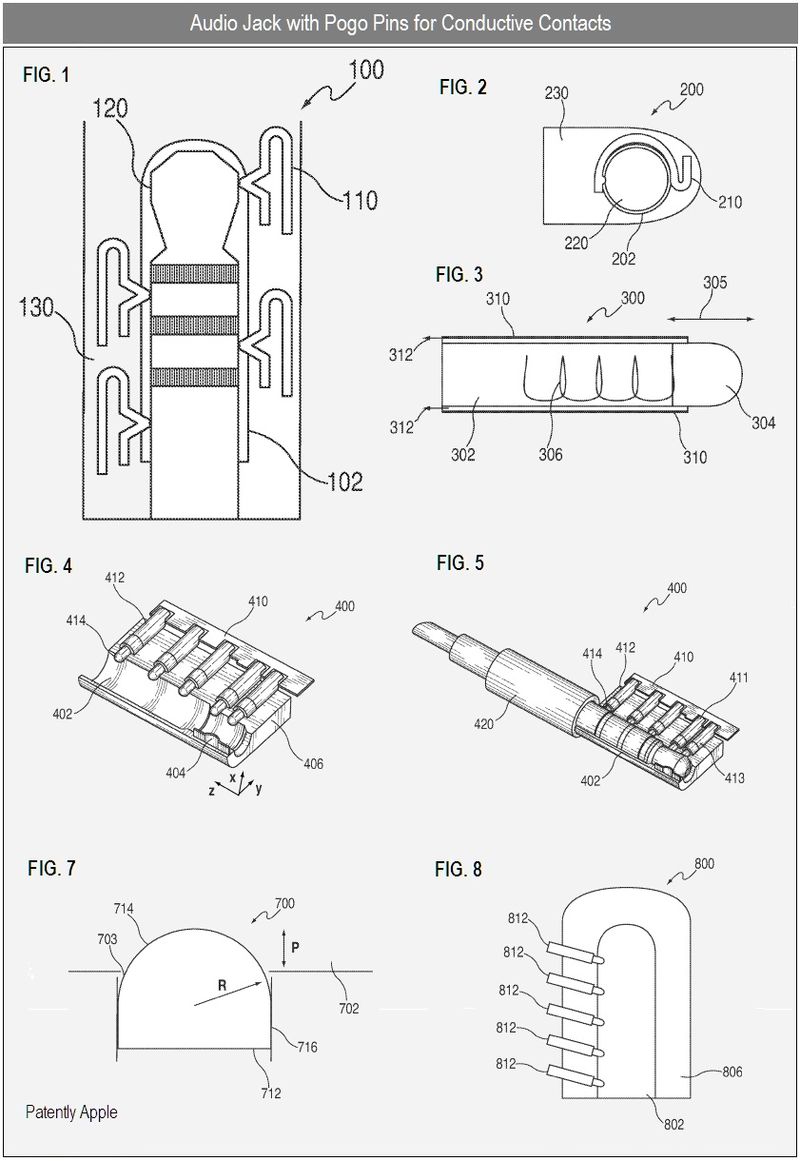 Three other patents were published today but were continuation patents from older previously published patents with some dates as far back as 1999.