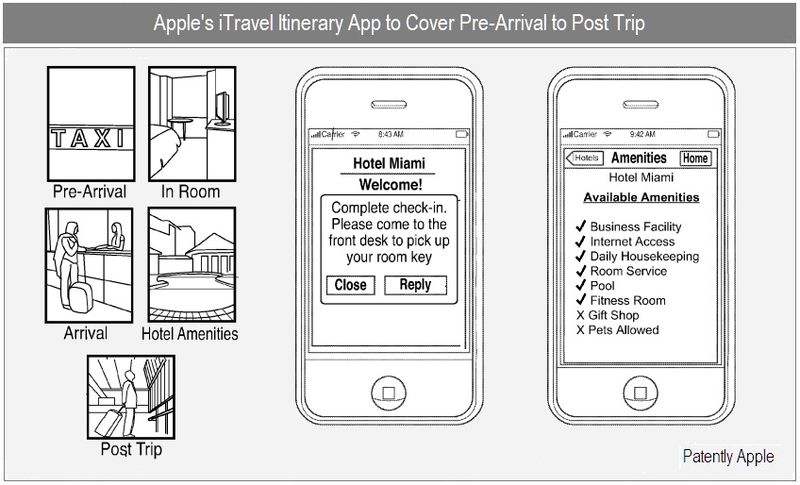 Apple's iTravel application services are already expanding and the app hasn't even launched yet. In our first report this morning, we covered a detailed travel itinerary application that will cover every aspect of your travel while the second report focuses on how your iPhone will be able to tap into a hotel's own servers to access multiple in-room services. For starters, your iPhone will act as your hotel key and from there you'll be able to control room settings such as lighting, bath settings, room temperature and so forth. Your iPhone will be able to be your hotel room's TV and stereo remote. You'll also be able to access other services like booking a visit to the hotel's spa or reserving a conference room all from the convenience of your iPhone or other iOS device. You'll even be allowed to check-out via your iPhone or check your room charges before leaving. When it comes to future travel – Apple is out to cover you every step of the way from travel arrangements right through to in-room services conveniently and in style.

As travelers stay in hotels or locations other than their homes, many interactions between the travelers and the hotels could take place. For example, a traveler could interact with a hotel to make a reservation, check-in, order room service, control room settings, use a concierge to identify attractions of interest in the vicinity, purchase entertainment options, check-out, and schedule subsequent aspects of a trip (e.g., order a taxi, reserve a rental car, or check-in to a flight). All of these interactions could require distinct actions from the user from different devices or elements. For example, a user could call to make a reservation, check-in in-person upon reaching the hotel, order entertainment using a menu available from a television screen, and identify attractions from a telephone or through an in-person conversation with a concierge, and check-out by receiving a receipt slipped underneath the user's door.

In some embodiments, the integrated application could interface with one or more servers associated with the hotel. For example, the iPhone could connect with distinct servers associated with ordering services or goods from the hotel (e.g., room service), and with distinct servers associated with attractions, shops or stores to allow a user to make reservations, make purchases, or access information. As another example, the electronic device could connect with the controls of a hotel room in which the user is staying to configure aspects of the room such as lighting, temperature, audio settings, video settings, bathtub settings, any other suitable room settings, or any combination of the above.

In some embodiments, the integrated application could allow a user to create, access, and modify hotel reservations. In some embodiments, the integrated application could allow a user to remotely check into a hotel, for example, as a user is approaching the hotel in a taxi. In this case, the iPhone could function as a room key. For example, the iPhone could transmit a signal using an appropriate protocol and radio (e.g., Bluetooth signal or other near field communication) to direct a door to be opened. As another example, the iPhone could display a pattern for an optical reader associated with a door. In some embodiments, through the integrated application a user could pre-order room service or other hotels services, control room settings (e.g., lighting, audio settings, video settings, temperature settings, and bath settings). For example, a user could remotely control the room settings, remotely pre-order room service, or both, before arriving at their room. Alternatively or additionally, the electronic device could function as a remote control to allow a user to control room settings and order hotel services while the user is in their room.

In some embodiments, the integrated application could allow a user to view concierge information (e.g., hotel amenities, nearby shops and restaurants, and the like). A user may make reservations and/or purchases at the shops and restaurants through the integrated application. For example, the electronic device could be used to interface with a menu providing access to hotel services (e.g., displayed on the television screen of the user's room, shown on a display of the electronic device, or both). Using the menu, the user could order videos available for purchase, send requests to schedule hotel services (e.g., schedule a wakeup call, make an appointment at the hotel spa, reserve a hotel conference room, and the like), or purchase goods using the existing hotel interface. In some embodiments, the integrated application can provide social networking abilities by allowing a user to locate friends and acquaintances (e.g., in the nearby area).

In some embodiments, the integrated application could allow a user to check out remotely (e.g., by displaying their bill and room charges). In some embodiments, the integrated application could provide other post-checkout functions such as allowing a user to access rewards information, allowing a user to request transportation (e.g., to and/or from an airport), providing bounceback offers, and storing travel receipts (e.g., so a user can be reimbursed for travel expenses).

Below are a series of potential travel itinerary application screenshots as presented in the patent. 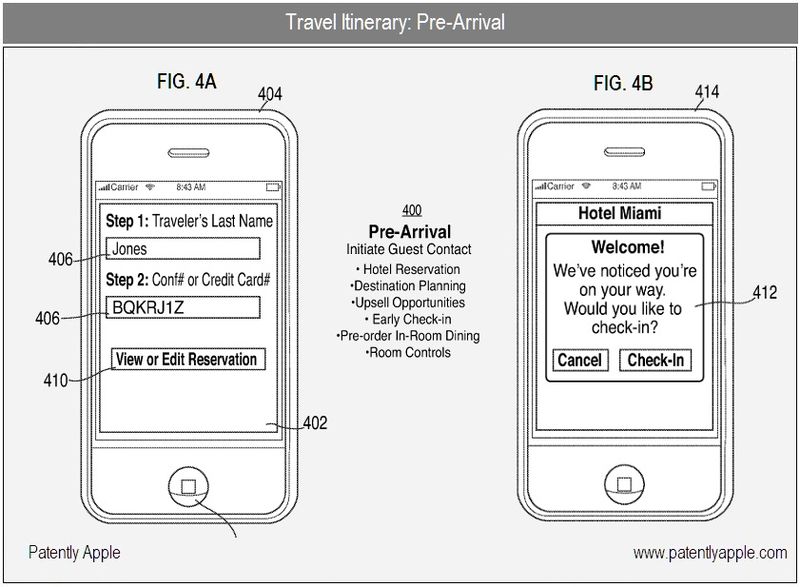 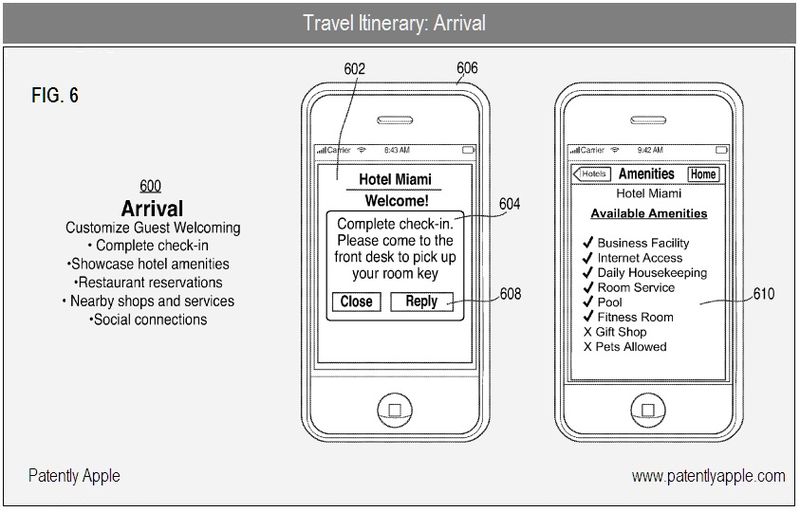 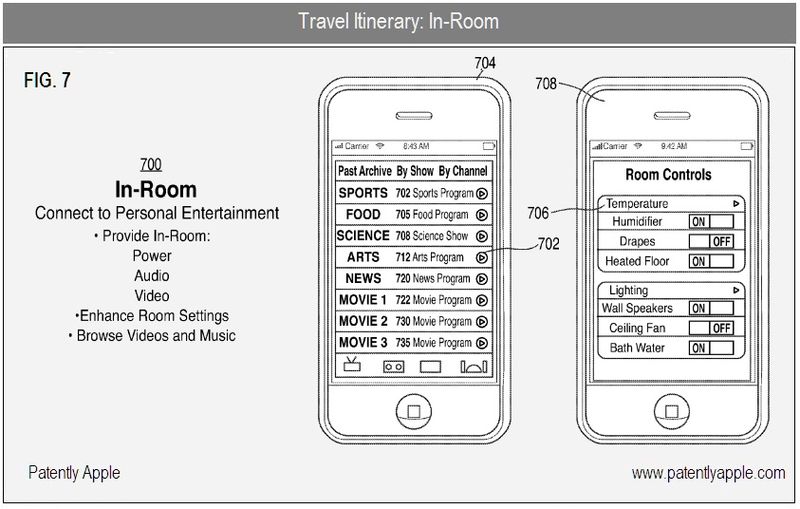 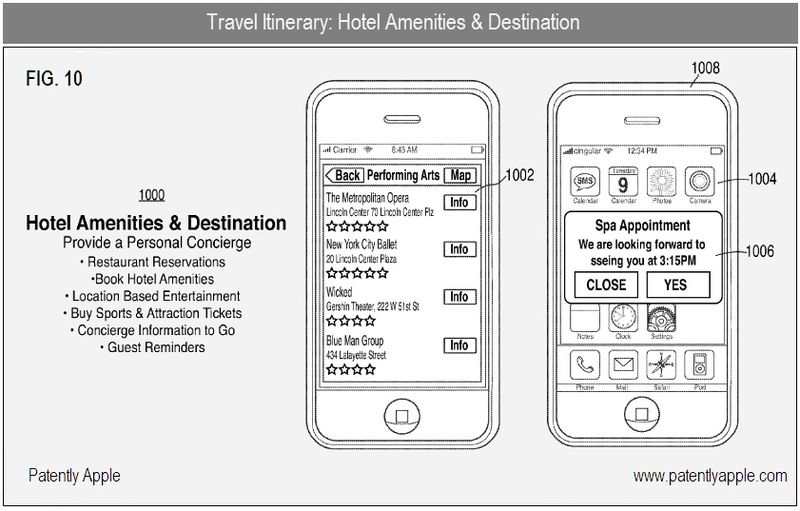 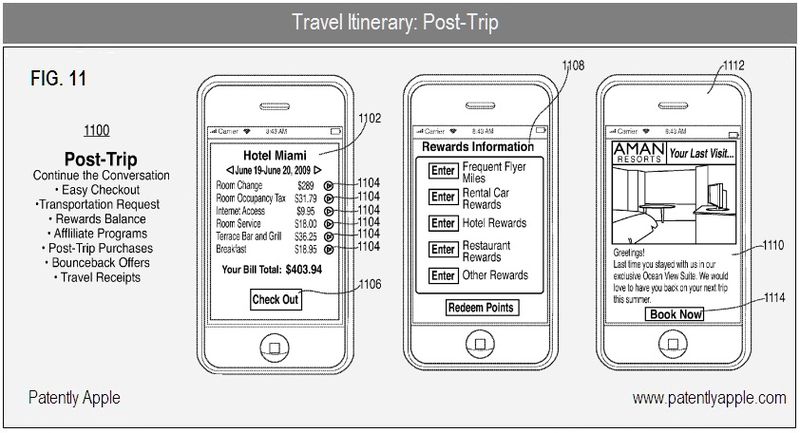 The patent provides the view that the iPhone will be able to be docked to an in-room stereo system or other playback devices such as a television and even a Blu-ray player, according to the patent.

Through audio system 800 and video system 900, a user could play video and audio stored on their iPhone through a television, for example, and continue to play the movie that you only half watched on your flight. 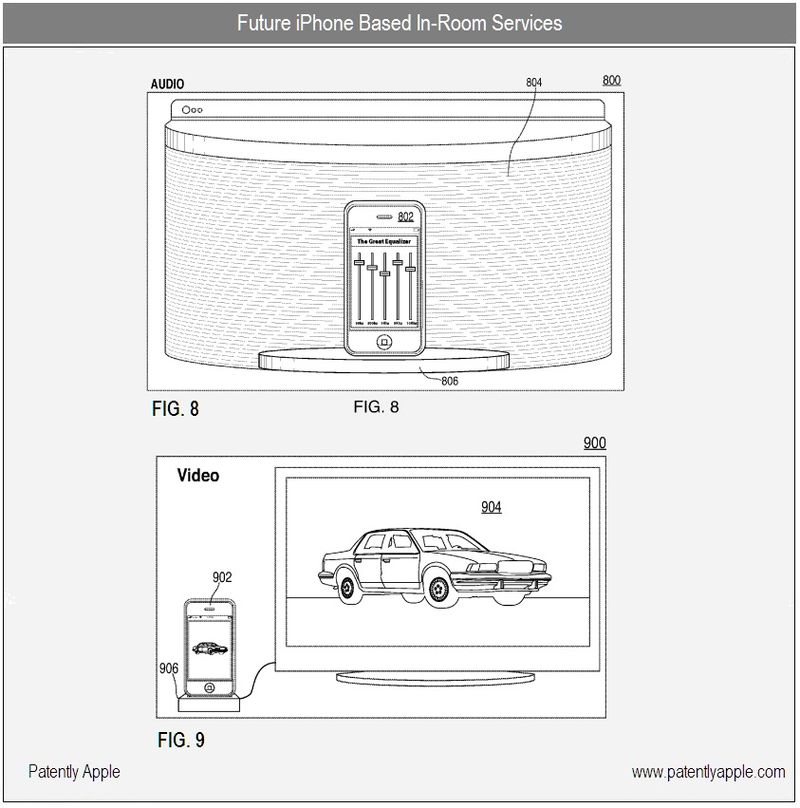 In some embodiments, the electronic device could be used to interface with a menu providing access to hotel services.