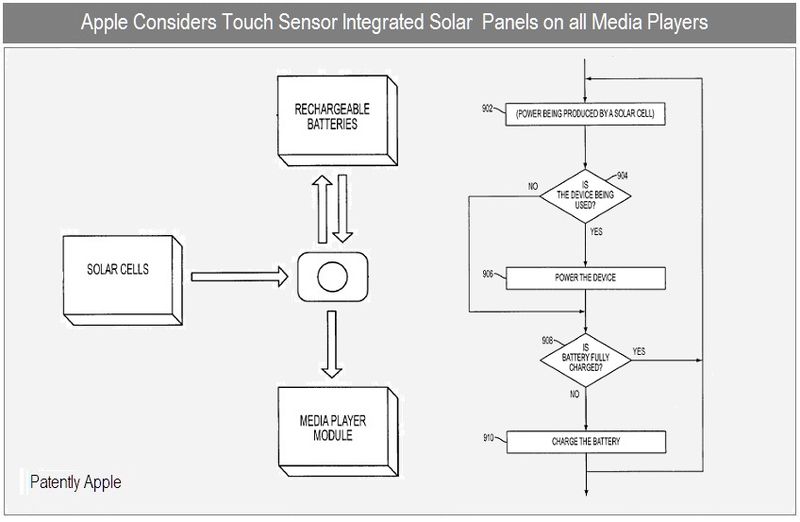 One of Apple's more interesting patents kicking off 2010 revealed their aspirations of engineering solar powered media players. In Apple's second patent on this very subject we get to peek at more of the detailing behind their engineering vision. Yet it boils down to two main points. Firstly we see that Apple envisions utilizing solar cell technology right across the board from iPod to iPad. Secondly and perhaps most intriguingly, we see Apple detailing how they'll be able to integrate cell panels beneath their multi-touch surface as opposed to it being applied to the top surface of their media players as previously thought. This revelation ensures us that Apple won't be sacrificing design for function. The reason that it's intriguing is that it supports the design shift that Apple's iPhone prototype took. By switching the iPhone's backside substrate to a non-metal surface would clearly open the door for Apple to implement a double-sided solar panel design. This would double the amount of power that the cells would be able to draw in order for them to power the media player longer. While this technology won't be ready for primetime in 2010 to be sure, we could seriously see this power assisted technology make its debut sooner than most skeptics think. 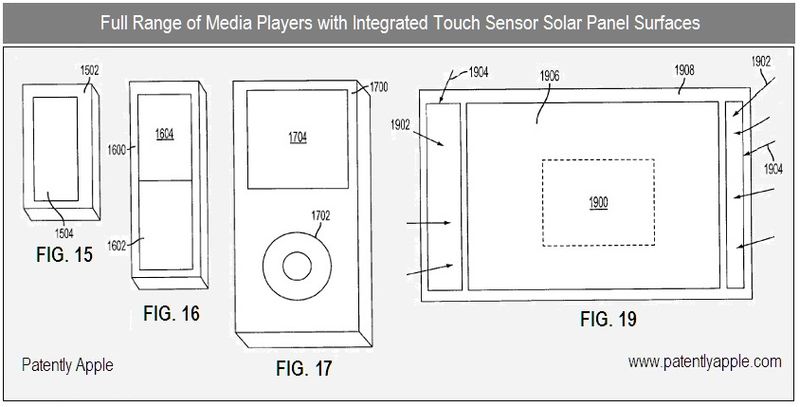 In Apple's patent FIG. 8 we see a depiction of a block diagram illustrating various functional modules associated with this patent including one or more solar cells 802, one or more rechargeable batteries 804 and a main operational module 806 of a media player. The switch or gateway 808 is a schematic representation of a (virtual) unit responsible for the "traffic control" of the electricity flow in the device. This unit may or may not be a concrete unit including circuit elements. In some embodiments, this circuitry 808 may contain a boost converter to change the voltage coming from the solar cells 802 to a value suitable for the batteries 804 or the main unit 806. The arrows in the figure represent the possible flow of electricity. 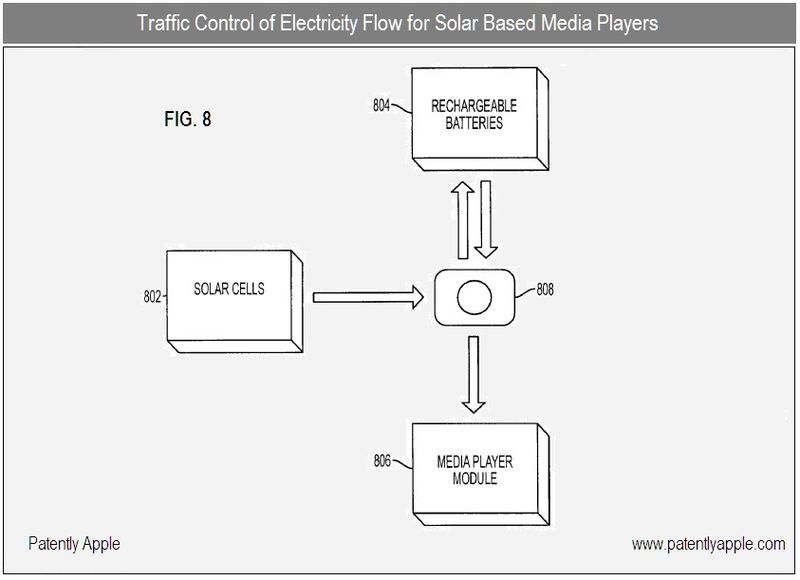 Apple's patent FIG. 10 shown below illustrates an exemplary capacitive touch sensor panel fabricated using a D-ITO substrate 1000 and including a solar cell panel 1014. The DITO substrate may be made out of any transparent material, for example, clear glass, plastic, hybrid glass/plastic materials, and the like. The DITO substrate may include column traces 1004 and row traces 1006 on either side of the substrate. Alternatively, Apple's FIG. 11 (not shown) illustrates a "Single" versus a "Double" or D-ITO layer substrate construction.

If Apple has indeed shifted their next generation iPhone design to carry a glass-like back panel, as was shown in their lost Apple prototype, then it could very well mean that Apple is, at the very least, paving the way for a double-sided solar panel based iPhone in the future as noted earlier. 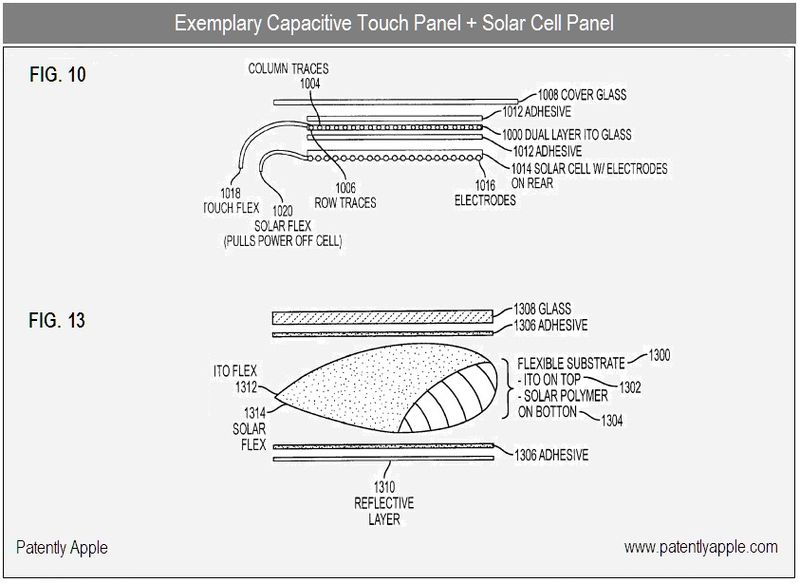 In Apple's patent FIG. 13, Apple presents us with an overview of a flexible substrate (1300) that has a touch sensor ITO pattern (1302) on one side of the substrate and a conductive solar polymer layer (1304) on a second surface.

It should be noted that Indium Tin Oxide (ITO) is first referenced in Apple's patent under patent point #44: "The row and column traces can be formed from a transparent conductive medium such as  indium tin oxide (ITO) or antimony tin oxide (ATO), although other transparent or non-transparent materials such as copper or conductive ink can also be used."

Although Apple's patent doesn't reference any company related to this conductive ink, it should be noted for reference sake alone, that a company by the name of Innovalight is hoping to have their Cougar Platform's Silicon Ink production ready by the end of 2010. Innovalight's literature states that "In addition to altering the material for novel solar cell designs, the material can also be modified for use with a variety of printing equipment."

Various Functional Modules behind a Solar Based Media Player 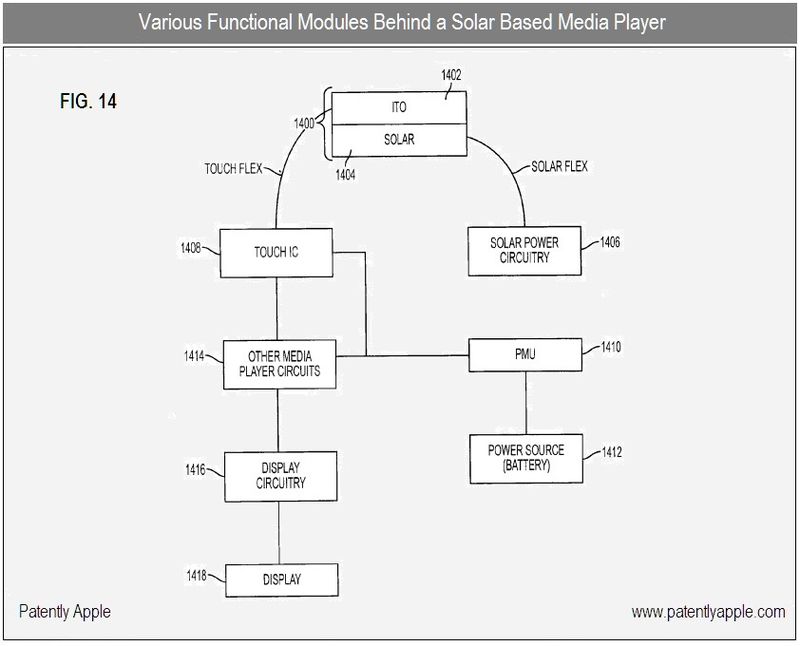 Update, June 8, 2010: Our Cover Graphic slightly changed by our adding FIG 9 and dropping FIG. 19 which illustrated a rough drawing of a handheld deivce. Our new graphic FIG. 9 illustrates the flow of Electricity powered by the solar cells of this invention.

There is also ceramics that could be used, not just glass or plastic.

Then again, it could already be happening. I also think that the aluminum strip in the 'lost prototype' would be the silver lining for that heart sensor patent you mentioned earlier. Where it's not actually aluminum but a silver compound.