In part one of this series we provided you with a basic overview of Apple's forthcoming financial application code named Transaction. In part two you'll see a multitude of screenshots related to financial instruments like credit and debit/smart cards, check handling and even group invoicing or split-billing – a common social interaction of splitting a restaurant bill with friends. Patently Apple's report is simply an overview of the iPhone Transaction application patent. For those of you who are bankers, accountants and/or retailers wanting to know a little more about Apple's new financial centric application, we provide you with direction as to where you could find more in-depth patent detailing on each and every topic covered here today.

In Apple's patent FIGS. 5A and 5B we see a series of figures collectively illustrate screen images that may be displayed on an iPhone when information representing a credit card account is entered and stored into the iPhone by a user. The stored credit card information may then be used as a payment account in conjunction with the transaction application described above.

As shown in FIG. 5A below, a user may initiate the transaction application by selecting the icon 34 displayed on their iPhone's home screen. 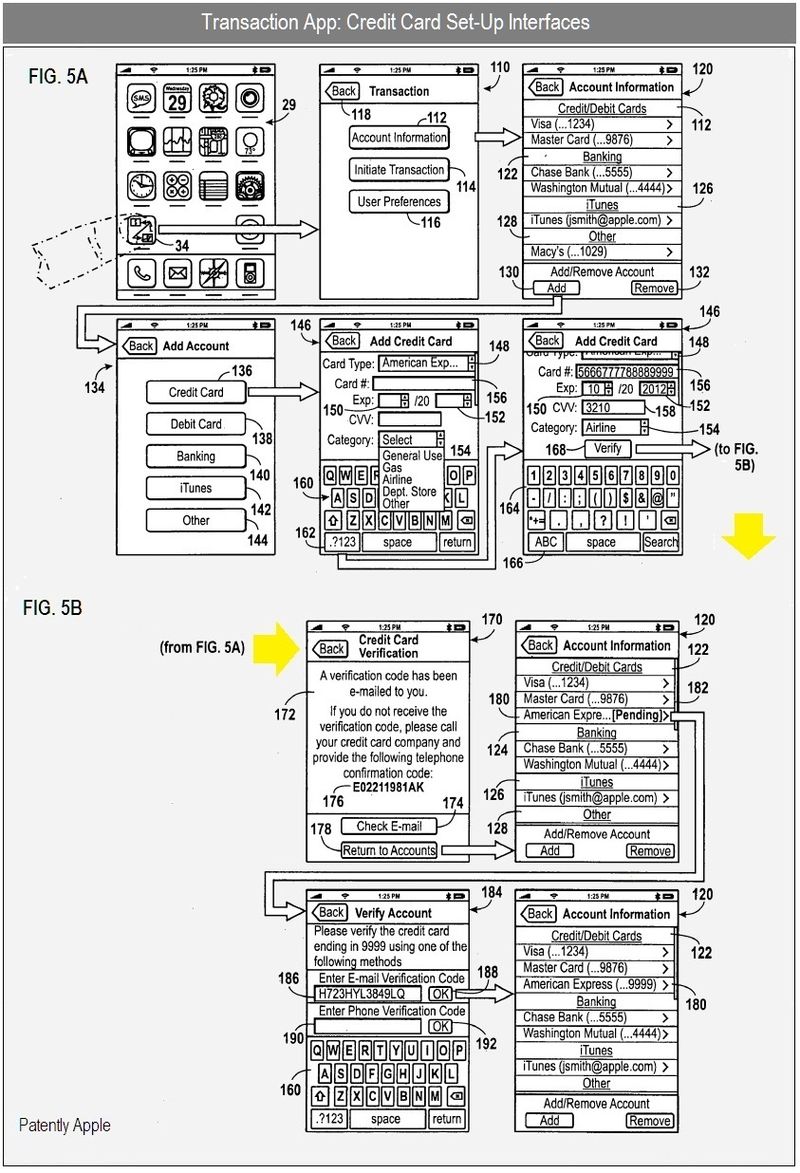 Apple's patent FIG. 26D shows a plurality of screens that may be displayed on a payee device illustrating a method for selecting a crediting account and completing the transaction initiated in FIG. 22A. 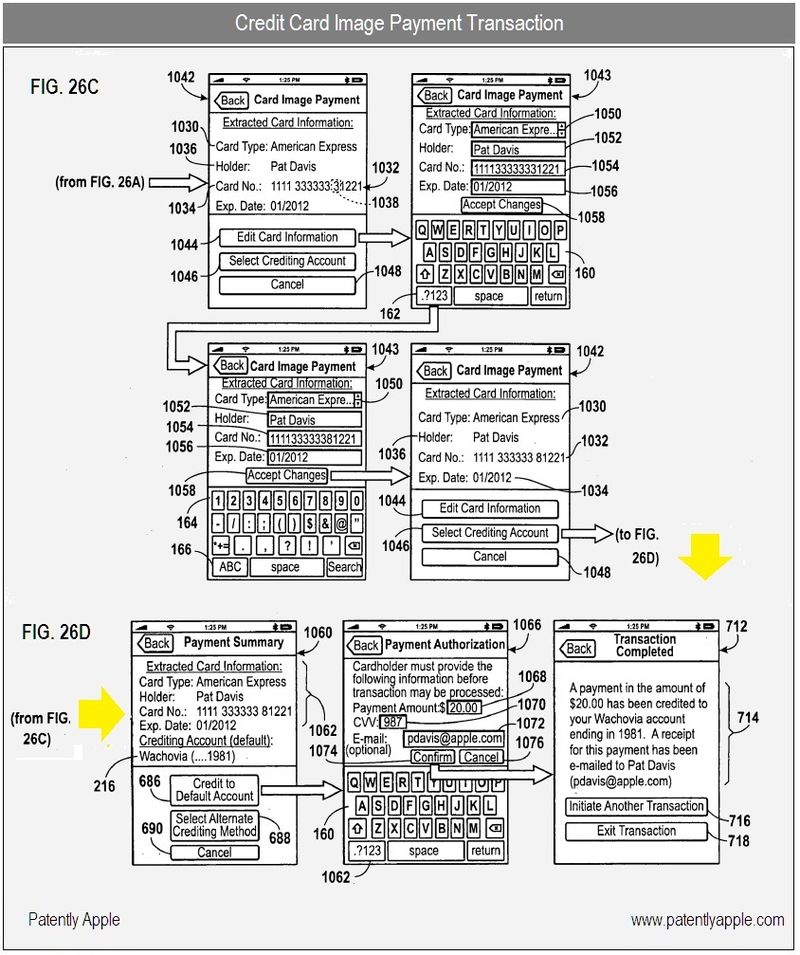 While the above embodiments have been described with regard to the processing of transactions between two electronic devices, such as the payee device 10 and the payor device 92, additional implementations of the presently described techniques may further include transactions in which the payee device 10 receives payment information from sources other than a portable or non-portable electronic device of the type generally represented by the payor device 92. 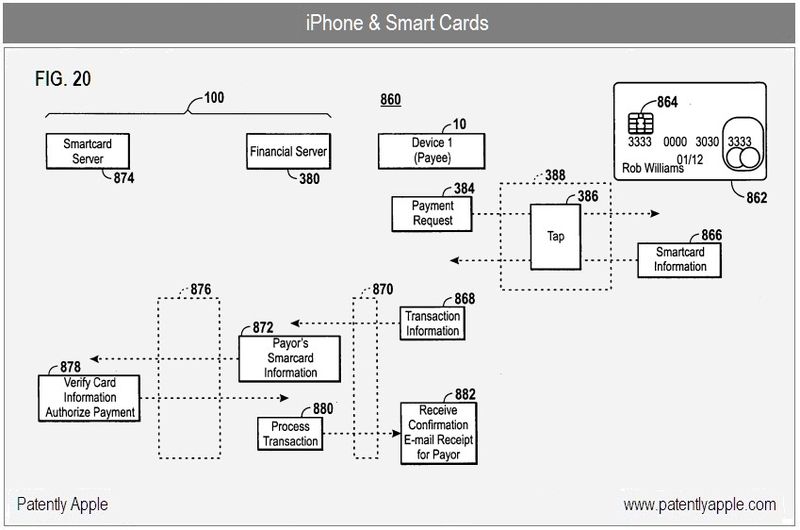 In Apple's patent FIG. 22B shown below, we see an illustration of the establishment of an NFC connection between the payee device 10 and the smart card 862 by way of the tap operation 386 depicted in FIG. 20 above. 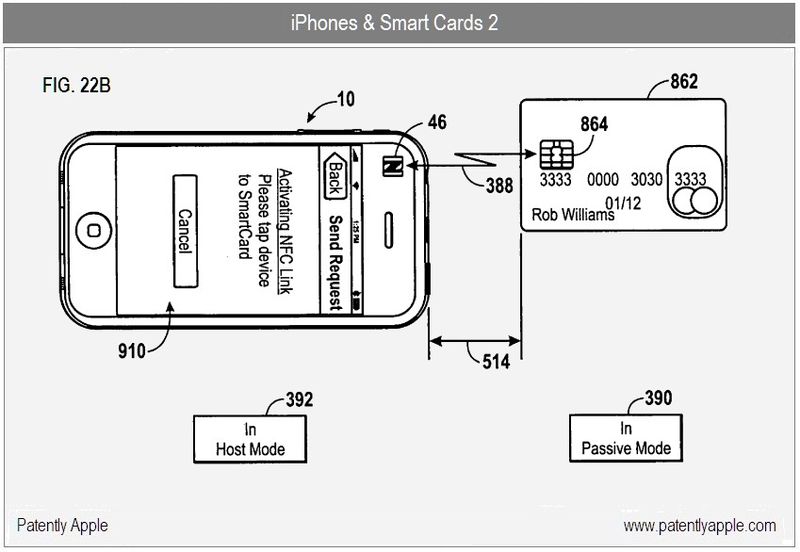 Shown below is a series of Apple patent figures from FIG. 27A through to FIG. 27G which represent a plurality of screenshots that may be displayed on the payee's iPhone covering a method for acquiring an image of a check. FIG. 27C depicts a technique for processing the image acquired in FIG. 27B for the extraction of payment information and patent FIG. 27D shows a plurality of screens that may be displayed on a payee device illustrating a method for selecting a crediting account and completing the transaction initiated in FIG. 27A. 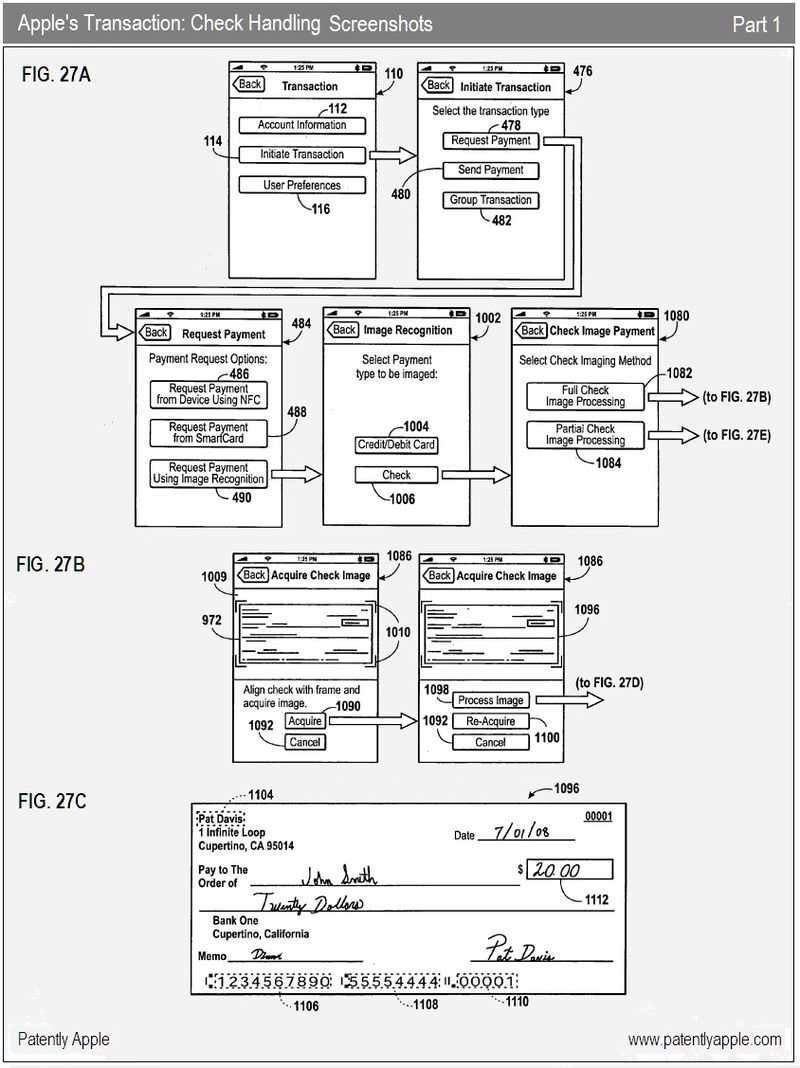 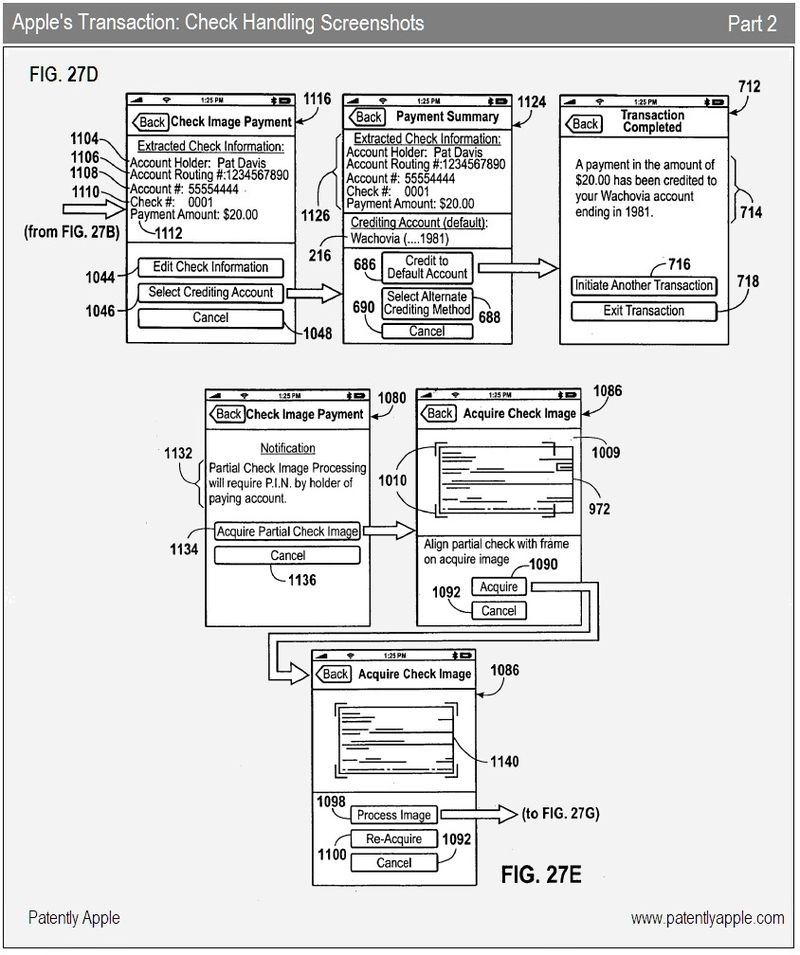 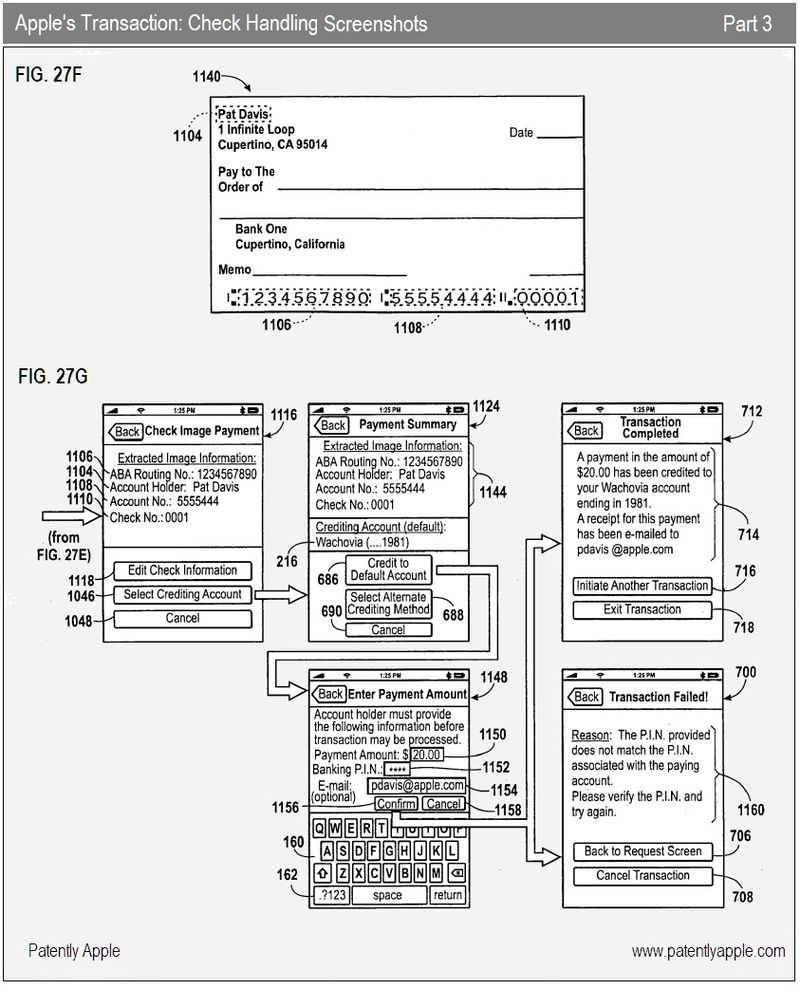 Apple's decision to include Split-billing in with the Transaction application sure makes a lot of sense. I think that everyone who has ever been a social teen understands the importance of being able to go to a pizzeria or Chinese restaurant and splitting the bill at the end of the evening with your buds. And Apple didn't miss a beat on this feature. In fact, Apple is toying with two methods of split-billing. One way is set up by the customer and the other is set up by the restaurant.

Below is a series of graphics covering the back and front-ends of Apple's new iPhone system and application code named "Transaction." 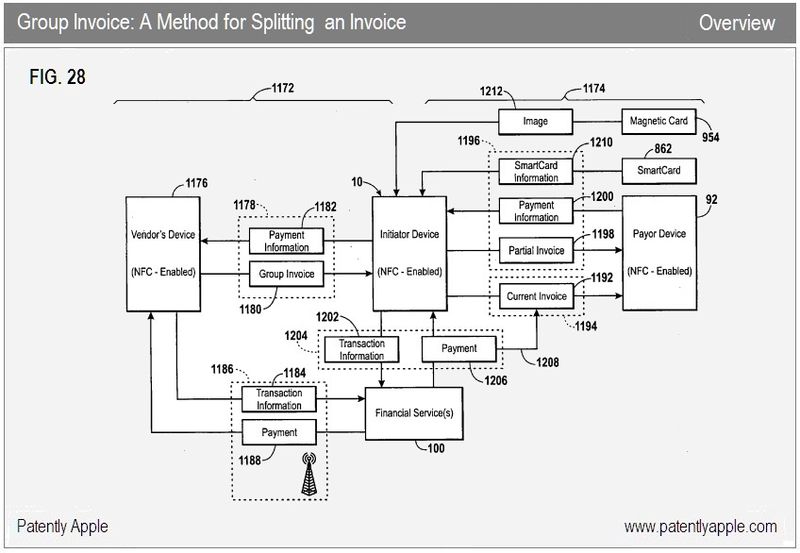 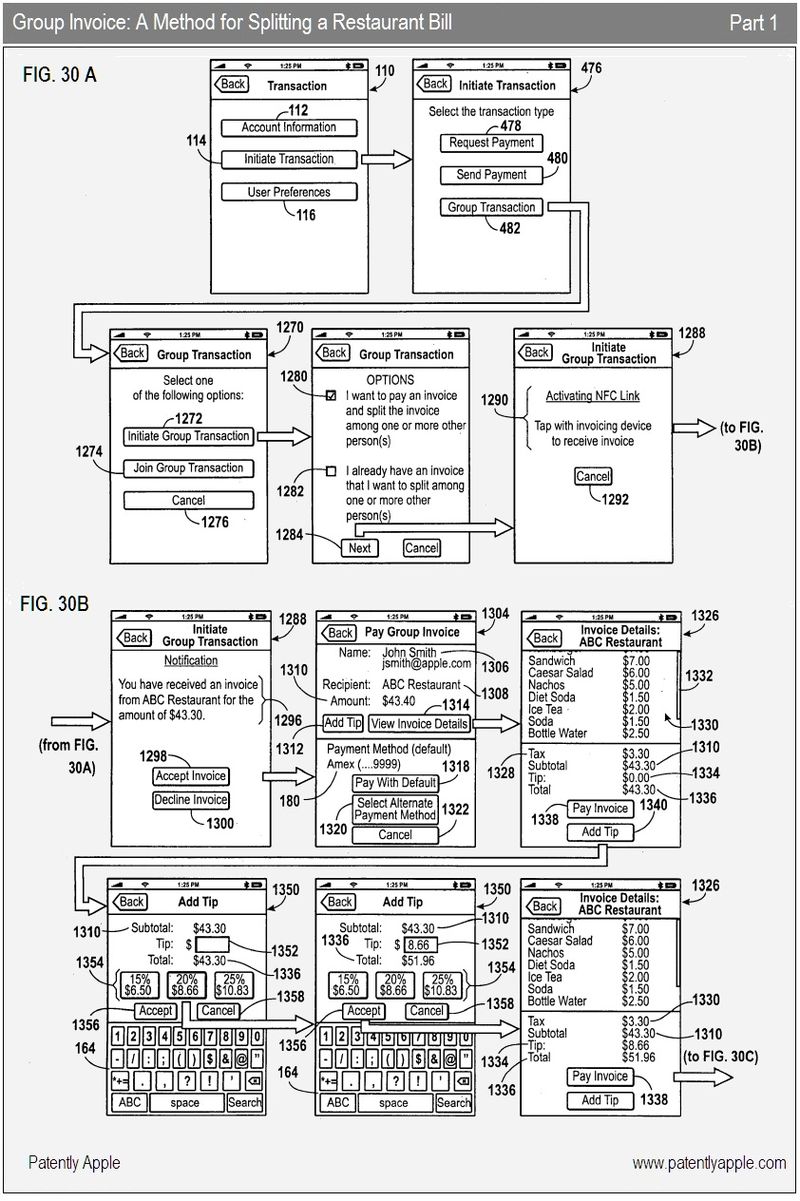 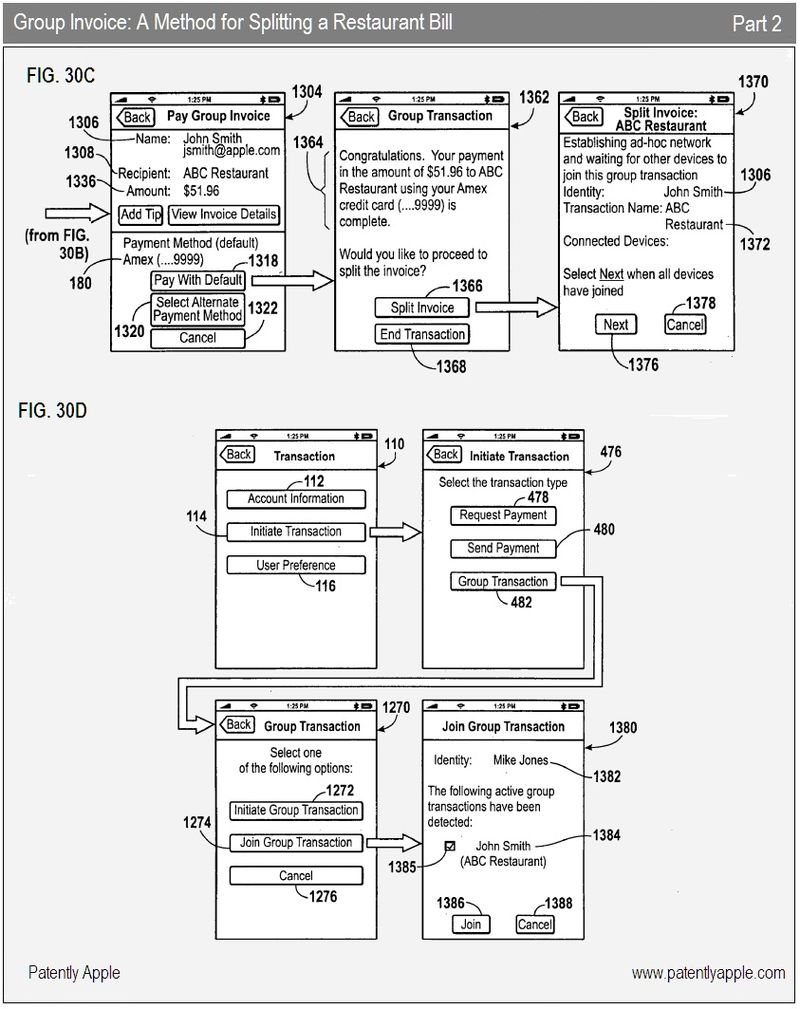 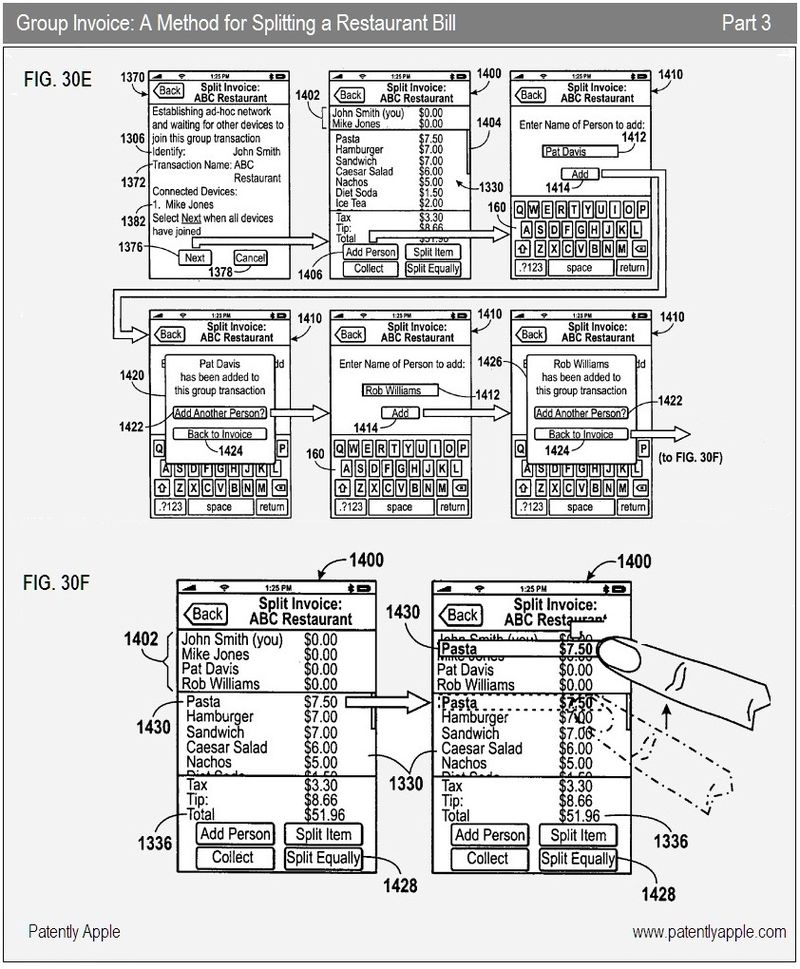 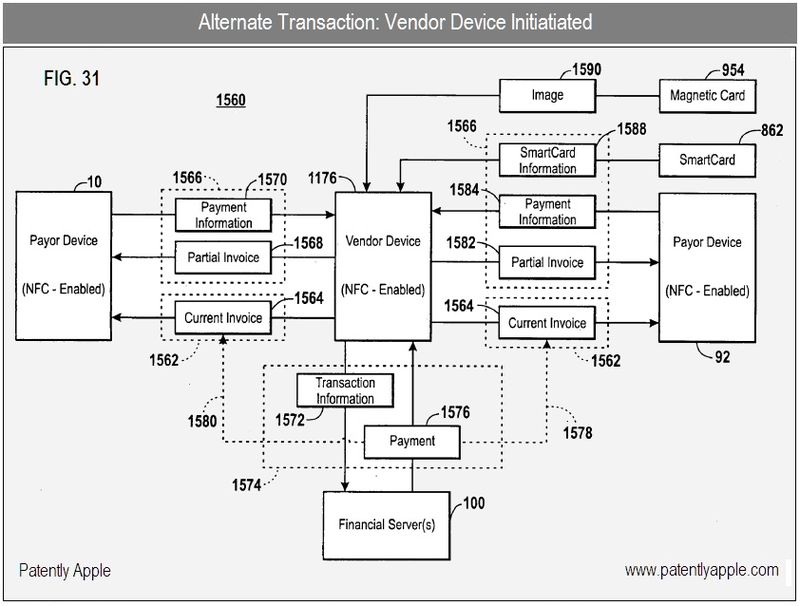 Once all the invoice items have been properly apportioned on the vendor device, partial invoices may be communicated to each of the payors participating in the transaction 1560.

Part three of this mini-series covering additional patents and aspects of "Transaction" will be posted later this month.

Good idea a wallet with phone, text, and tech ability, one less thing to carry in the morning.

Today, whenever I leave the house, I take my iPhone, my keys and my wallet!

Soon, it will only be my iPhone!