Apple Takes a Giant Leap in Biometrics with Heart Sensors 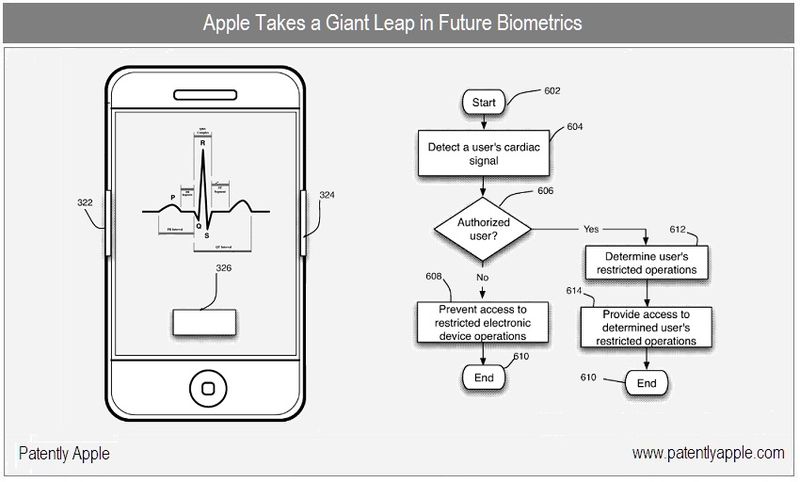 Apple's first high-end enterprise quality biometric security system patent surfaced back in March of 2009 and with today's patent, Apple takes a giant leap forward in biometric security. In today's patent we discover that future iterations of the iPhone could very well support sophisticated embedded heart sensors to monitor the user's heart and record such data for future identification purposes when making banking transactions or protecting highly sensitive documents or data. This will play a part of a future patent report due later this month. Today's patent further confirms that a future iPhone will indeed support a pico or pico-like projector.


Other biometric-based approaches could be used to authenticate a user. In some embodiments, an electronic device could authenticate a user based on the attributes of the user's heartbeat. For example, the durations of particular portions of a user's heart rhythm, or the relative size of peaks of a user's electrocardiogram (EKG) could be processed and compared to a stored profile to authenticate a user of the device. To detect a user's heartbeat or heart rhythm, however, the electronic device must provide at least two leads that the user contacts to detect the user's cardiac signals. Although the leads could simply be placed on the exterior surface of the device housing, for example in a defined location where the user may place a finger, this approach is not aesthetically pleasing, and may cause some prospective buyers to consider other devices.


In addition, such an approach may require the user to perform a specific authentication action--viz., placing a finger on the one or more leads, then unlocking or accessing the electronic device features (e.g., by moving a slider across the screen). This additional step may in fact be so encumbering that users disable the authentication feature and instead use an unsecured electronic device.


Apple's patent FIG. 1 is a schematic view of an illustrative electronic device, such as an iPhone, for receiving the output of one or more sensors in accordance with one embodiment of the invention. The noted aspect of FIG. 1 is that it includes component 112, a heart sensor. 
The patent states that heart sensor leads associated with the invention could be constructed from a silver based compound, which could provide superior conductivity relative to other metallic compounds (e.g., steel or aluminum). In addition, the size and location of the leads could be selected to ensure that sufficient contact is made between the user (e.g., the user's hand or finger) and the leads for cardiac signals to be detected. For example, each lead could include a pad or extended area placed on the outer or inner surface of the iPhone's bezel or housing. The pad or extended area could then be coupled to a wire or other connector for providing cardiac signals to a processor for processing. As another example, an entire portion of the iPhone's enclosure could serve as a lead for the heart sensor.

In such embodiments, the portion of the enclosure could be sufficiently electrically isolated from other conductive portions of the electronic device housing to ensure that lead portions of the device do not short. In some embodiments, an accessory coupled to the electronic device could be used to detect a user's heart rate. For example, the leads could be located in one or more earbuds or in a headset, for example


Heart Rate or Characteristics Thereof used as a Security Function


Beyond being able to use the future iPhone's heart rate monitor/sensor for health related functions and monitoring, the heart monitor could also act as a sophisticated security feature. The iPhone could receive and process heart activity data in response to a user instruction or request to access a particular application or data that for which access is restricted. Upon receiving the cardiac activity, the electronic device could extract one or more characteristics of the received activity and compare the extracted characteristics with the characteristics previously stored in memory that were associated with authorized users. If the extracted characteristics match those of an authorized user, the electronic device could authenticate the identified user.


For instance, the electronic device could allow the user to access private banking applications, or conduct financial transactions (e.g., transferring funds to different accounts, or purchasing merchandise) using the electronic device. In other examples, the applications could simply include your contact list or email accounts. The heart sensors would of course be only one of several biometric security measures available to the user – but this is one of the most sophisticated security measures to date. How sophisticated is this? Well, here's an example: 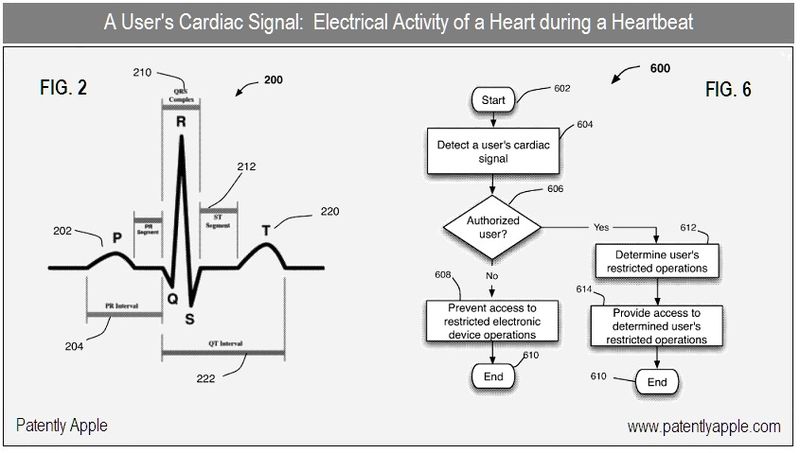 Using a heart sensor, the electronic device could detect and analyze the electrical activity of the heart over time. Apple's patent FIG. 2 is a graphical representation of illustrative electrical activity of a heart during a heartbeat. Representation 200 may include a plot of the variation of the heart's electrical potential over time. A typical heartbeat may include several variations of electrical potential, which may be classified into waves and a complex. For example, representation 200 could include P wave 202, QRS complex 210, and T wave 220. Some representations could in addition include a U wave (not shown). The P wave could represent normal atrial depolarization, when the main electrical vector spreads from the right atrium to the left atrium. The shape and duration of the P wave can be related to the size of the user's atrium (e.g., indicating atrial enlargement), and can be a first source of heartbeat characteristics unique to a user. If the details of such a function are of interest to you, then you could review the patent's points 36 to 41.


In Apple's patent FIG. 6 we see a flowchart of an illustrative process for performing an electronic device operation based on a user's cardiac signal in accordance with one embodiment of the invention. 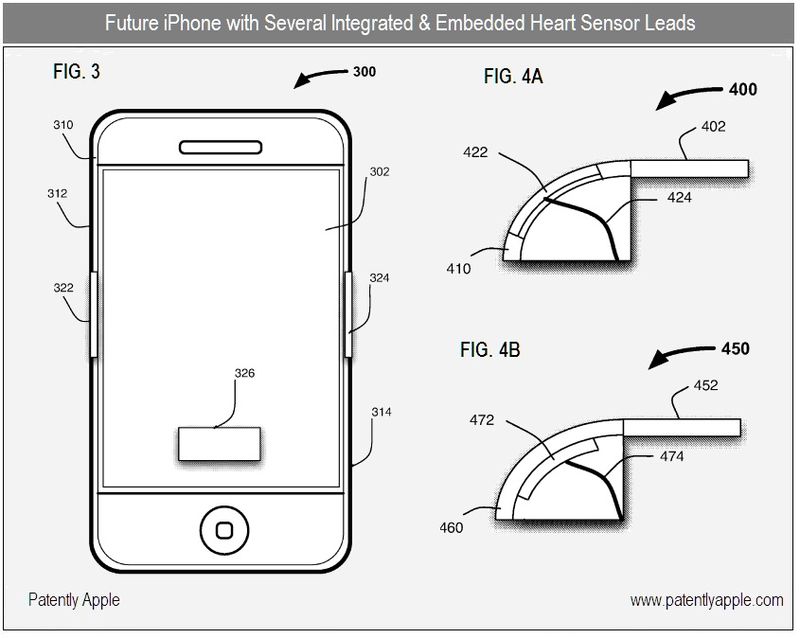 The heart sensor of this future iPhone could include several leads for detecting the user's heart activity. The leads could be integrated in any suitable portion of the iPhone as shown in patent FIG. 3. The iPhone could include leads 322 and 324, which could include conductive pads, could be coupled to sides 312 and 324 of bezel 310, respectively, such that when the user holds the device, the user's thumb and fingers are placed in contact with leads 322 and 324. The leads could detect the user's cardiac activity through the contact with the user's thumb and fingers, and provide the detected activity to the electronic device processor for processing.


In some embodiments, the iPhone could include an additional lead 326 embedded in or behind the iPhone's display. Lead 326 could be operative to detect a user's heart activity as the user moves a finger across the iPhone's display in the vicinity of or directly over lead 326 (e.g., as the user drags a finger over lead 326 to move a slider when unlocking the electronic device). Apple's patent FIG. 4A and 4B are cross-sectional views of an illustrative electronic device having a bezel with an embedded heart sensor lead in accordance with one embodiment of the invention. For those interested, this topic is further detailed in patent points 43-46.


One last interesting factoid popped up under patent point #27: This future iPhone will include a pico or pico-like projector. The patent specifically states that "the display circuitry could include a movable display or a projecting system for providing a display of content on a surface remote from electronic device 100 (e.g., a video projector). This is Apple's fourth patent pointing to such a feature (see One, Two, Three).


A Note to Facebook Fans:  Patently Apple is temporarily adding the new Facebook "Like" button to the right sidebar of our blog as a test. If you want to know more about this feature, see this CNet report. If Facebook Fans like this feature, then make it known to us by participating or providing feedback either through our contact form or in our comment area. Feedback relating to the feature sent via our comment system won't be made public. The feedback is a private matter. Thanking you in advance for your cooperation.