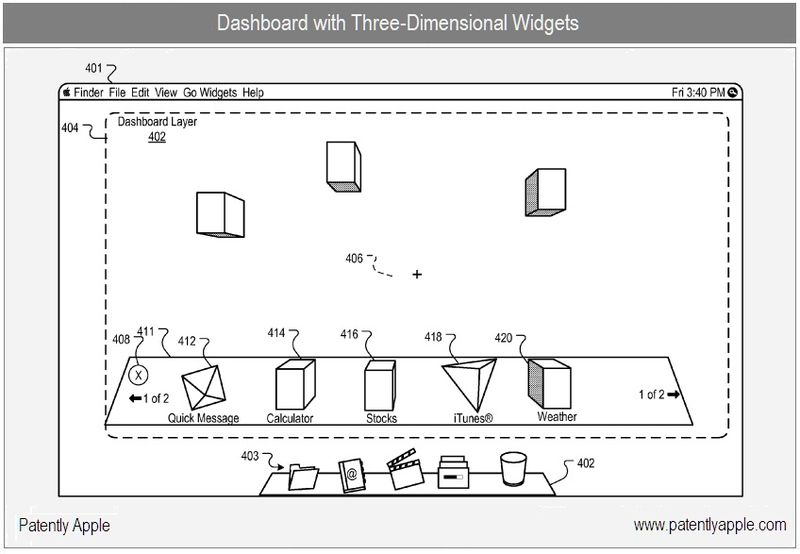 A week ago today, a new patent of Apple's surfaced detailing a future OS X 3D feature relating to ambient light. In today's published patent, Apple takes their future OS dashboard into hyper-drive with 3D widgets. These next generation 3D widgets will actually provide different features, attributes and/or distinct functionality depending on which side of the widget you click on. The user will be able to lift and rotate the widgets to expose these various functions and could be an extraordinary tool that will save you time and useless repetitiveness. With Google running scared of Apple's possible next moves and/or ramp-up into 3D variations of OS X and iPhone OS, they just acquired BumpTop on May 2, 2010. Here's a video of it if you've never heard of BumpTop before. The question becomes, what does Google know about Apple's 3D operating systems that have them on the run?

A hallmark of modern graphical user interfaces is that they allow a large number of graphical objects or items to be displayed on a display screen at the same time. Leading personal computer operating systems, such as Apple Mac OS provide user interfaces in which a number of windows can be displayed, overlapped, resized, moved, configured, and reformatted according to the needs of the user or application. Taskbars, menus, virtual buttons and other user interface elements provide mechanisms for accessing and activating windows even when they are hidden behind other windows.

Although users appreciate interfaces that can present information on a screen via multiple windows, the result can be overwhelming. For example, users may find it difficult to navigate to a particular user interface element or to locate a desired element among a large number of onscreen elements. The problem is further compounded when user interfaces allow users to position elements in a desired arrangement, including overlapping, minimizing, maximizing, and the like. Although such flexibility may be useful to the user, it can result in a cluttered display screen. Having too many elements displayed on the screen can lead to "information overload," thus inhibiting the user to efficiently use the computer equipment.

Many of the deficiencies of conventional user interfaces can be reduced using "widgets." Generally, widgets are user interface elements that include information and one or more tools (e.g., applications) that let the user perform common tasks and provide fast access to information. Widgets can perform a variety of tasks, including without limitation, communicating with a remote server to provide information to the user (e.g., weather report), providing commonly needed functionality (e.g., a calculator), or acting as an information repository (e.g., a notebook). Widgets can be displayed and accessed through a user interface, such as a "dashboard layer," which is also referred to as a "dashboard."

Due to the large number of widgets available to a user, a virtual desktop or dashboard can become cluttered and disorganized, making it difficult for the user to quickly locate and access a widget. Furthermore, each widget may be able to perform a number of different functions, and to access these functions the user must engage an interaction model of the widget, that may require several user selections and user commands, which can become repetitive and degrade the user experience. 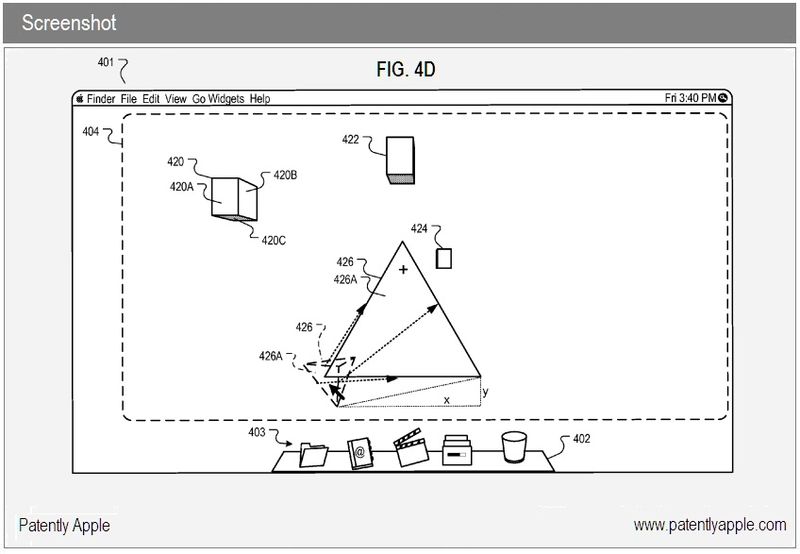 Each widget could be selected by the user's cursor and rotated and/or moved in the three modeled dimensions. Various interaction models could be used to manipulate the widgets. For example, mousing over a widget and holding down a right click button when the cursor is on an application surface could allow the user to select the widget to position the widget in the x and y-dimensions, while holding down a left click button can allow the user to position the widget along the z-axis. To rotate a widget, the user can mouse over a cursor and use a mouse wheel, which imparts a rotation about an axis defined by the position of the cursor relative to a centroid of the rendered object represented by the widget (also see 3D remote patent).

The multidimensional functionality per application could be mind-boggling and apparently we'll be given the means to define many of these functions. What a great idea. 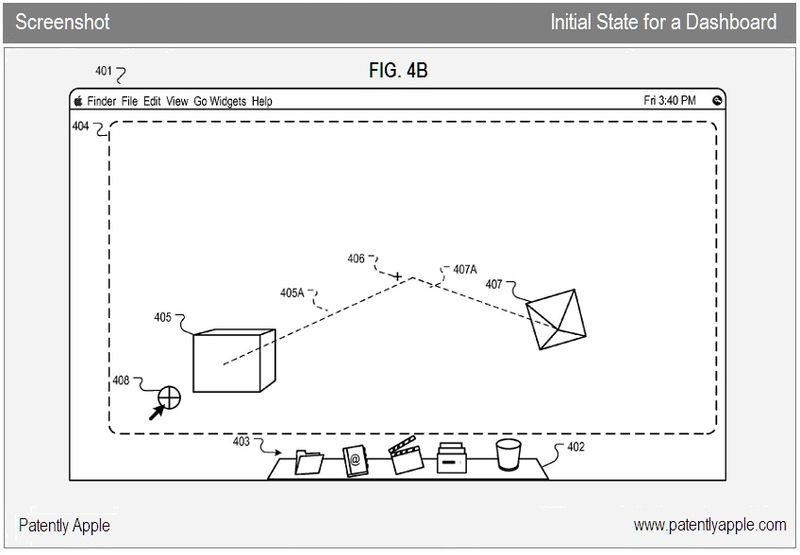 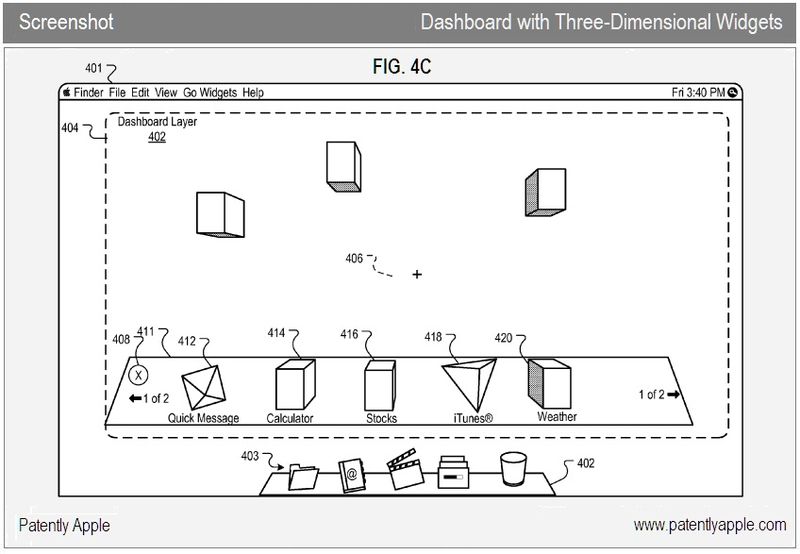 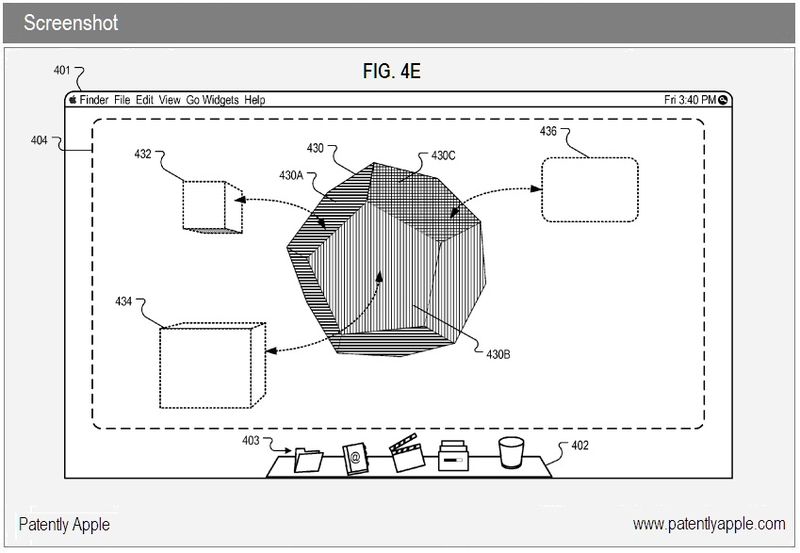 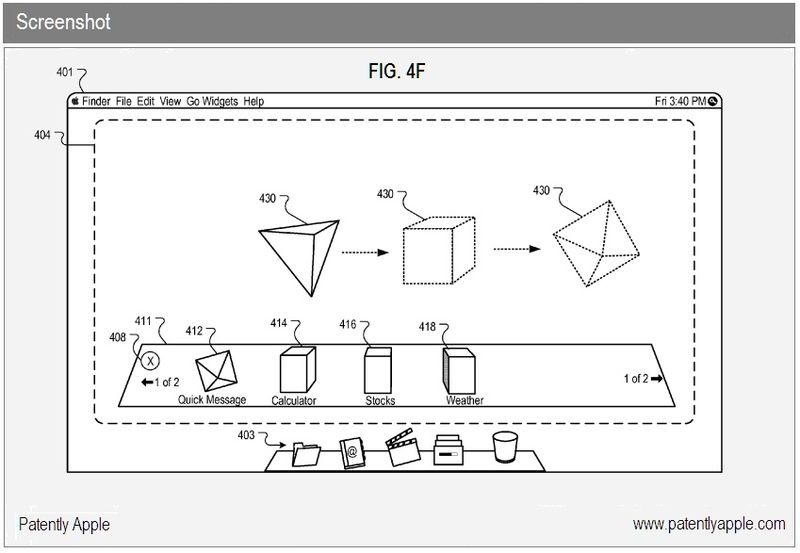 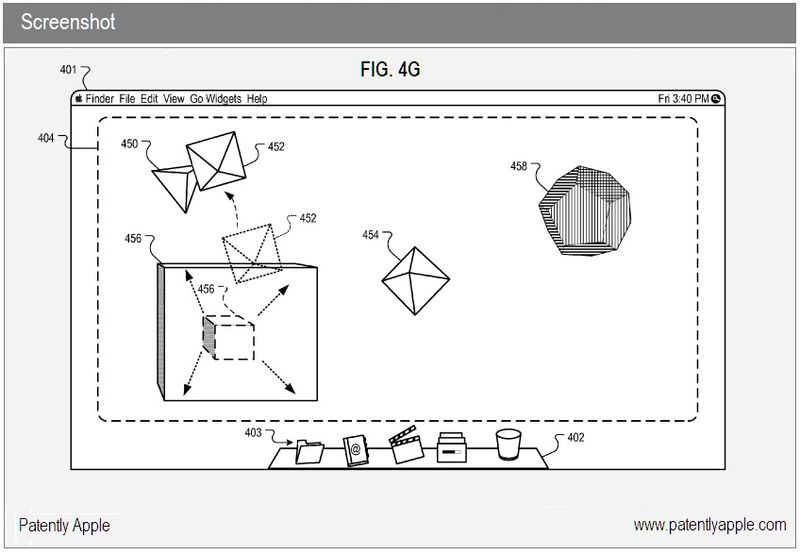 Apple credits John Louch and Imran Chaudhri as the inventors of patent application 20100115471, originally filed in Q4 2009 or about six months ago.