An Obscure Apple Patent Points to a Touch Screen iMac 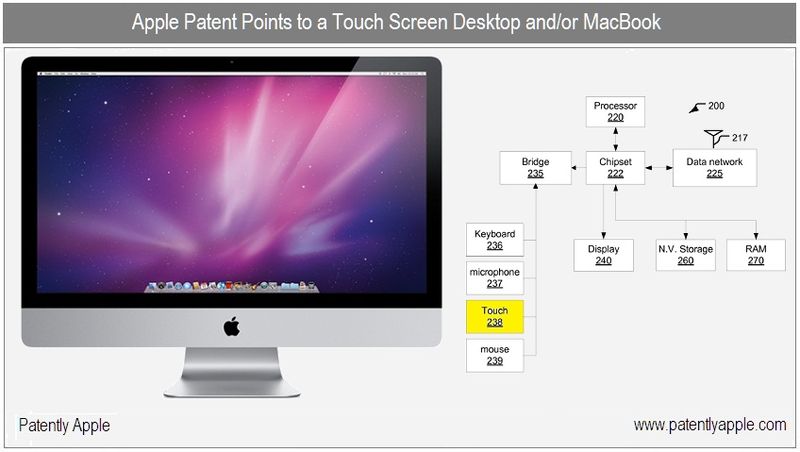 On April 22, 2010, the United States Patent and Trademark Office published an obscure patent of Apple's titled "Scheme for Authenticating without Password Exchange" which revealed a little something unexpected. Buried within the patent images of this patent we find a flowchart listing a touch screen that could be associated with both a Macbook and a small form factor desktop. This supports two of Apple's January patent applications regarding a touch screen iMac and MacBook.

In an obscure patent application relating to systems and methods for allowing one entity to authenticate with another entity, Apple presents a flow chart that points to a touch screen component that is isn't restricted to the iPhone. The following patent details prove this point out. 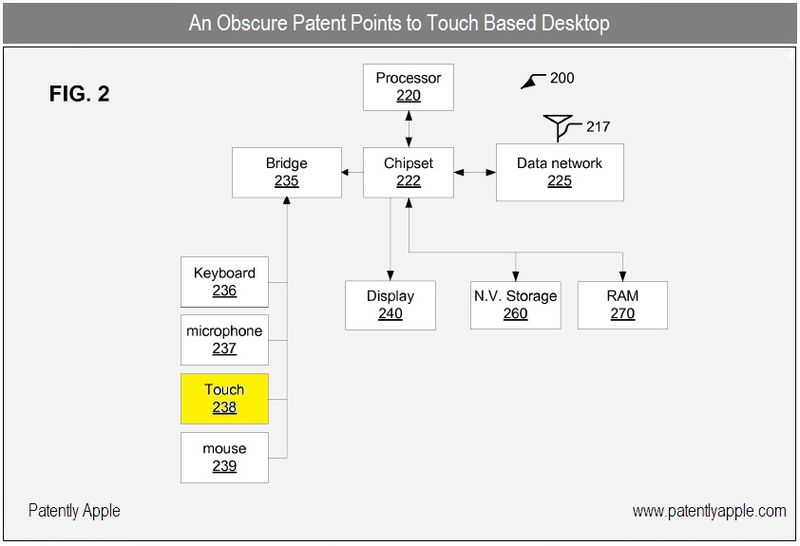 Apple's patent FIG. 2 illustrates example components of a system 200 in which can be implemented methods according to the following description. The system comprises a process 220 communicating with a chipset 222. Chipset 222 communicates with user interface 235 equipment. Example of such equipment include one or more of a keyboard, a microphone 237 (and potentially other intermediate processing equipment used in voice recognition), touch screen input 238, and mouse input 239. Chipset 222 also includes an interface to a display 240, and an interface to non-volatile storage 260. Non-volatile storage can comprise hard drives, flash drives, optical storage, state-change memory, and any other types of storage that can retain information, often without power consumption. In some implementations, the interface 225 also can be comprised in the interface to display 240, for example, for DVI or HDMI connections, where authentication may be desired.

The combination of a keyboard, microphone, mouse, DVI, HDMI and touch screen screams next generation desktop. The patent specifically states that "such hardware, firmware and software can also be embodied in any of a variety of form factors and devices, including laptops, smart phones, small form factor personal computers…"

System and Method for a Derivation Function for Key per Page: Apple's invention relates to digital rights management, and more specifically to using a derivation function to derive a key for each page of data. The patent discloses systems, methods and computer-readable media to perform data encryption and decryption using a derivation function to obtain a key per page of data in a white-box environment. For more information, see patent application 20100098255.

Blur Computation Algorithm: This continuation patent discloses an improved blur computation algorithm. The proposed algorithm accomplishes a blur of an image using fragment programs on a GPU. Alternatively, the blur may be computed on a CPU through emulation or directly programmed. Modifications of the program are possible that accomplish motion blur, zoom blur, radial blur, and various other forms of blur that vary across an image computed for the purpose of simulating depth-of-field. For more information, see patent application 20100098350.

System and Method for Stream/Block Cipher with Internal Random States: Apple's invention relates to computer security and more specifically to data encryption and decryption. The patent discloses systems, methods, and computer readable-media for performing data encryption and decryption using a stream or block cipher with internal random states. The method includes splitting the input data into a predetermined number of blocks and processing each block. The processing includes creating sub-blocks, permuting the sub-blocks, replacing bytes using a lookup table, rotating bits, performing expansion and combining sets of bits. The element of randomness employed in this process allows for the same input to yield the same output, with differing internal states. For more information on this patent application, see 20100098244.