Apple Wins a Patent for an Advanced Battery Recharging System

The US Patent and Trademark Office officially published a series of 13 newly granted patents for Apple Inc. today in addition to 3 industrial design patents covering Apple's MacBook Pro and MacBook Air. The notable granted patents presented in our report today includes one relating to Apple's advanced iPod Click Wheel, another relating to the iPhone's alert silencing system and perhaps the most important, a never released battery charging system covering a wide variety of devices. The proposed system would allow batteries to be charged by plugging them directly into a future specialized iMac and/or keyboard slot. 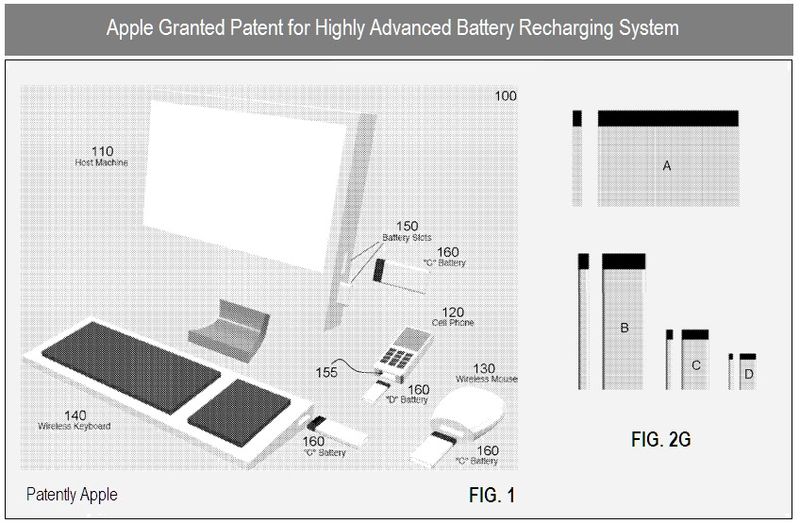 Apple has been granted a patent for a highly advanced battery charging system that has yet to come to market. The battery charging system will allow host machines, be it an iMac or MacBook, to both power consuming devices as well as power charging devices. Another aspect of the patent relates to the concept of a "universal battery" where a few "types" of batteries are adapted to be coupled with a large variety of electronic devices. For instance, there'll be a battery type for large mobile devices such as the MacBook, a medium size battery for the iPhone and iPod and yet a smaller battery for such things as wireless mice, watches, RFID devices, and small sport-type headphones. Apple's rechargeable battery system will also introduce a plurality of sensors to measure temperature and pressure of the battery core or to measure the current and voltage of the battery core in response to power flowing into or out of the battery core. Apple's new battery system will also uniquely alert end users when battery servicing or replacement is required. The system will direct users directly to either Apple's own iTunes Store or other participating retailer for convenience. For more about this patent, see Patently Apple's 2009 report. 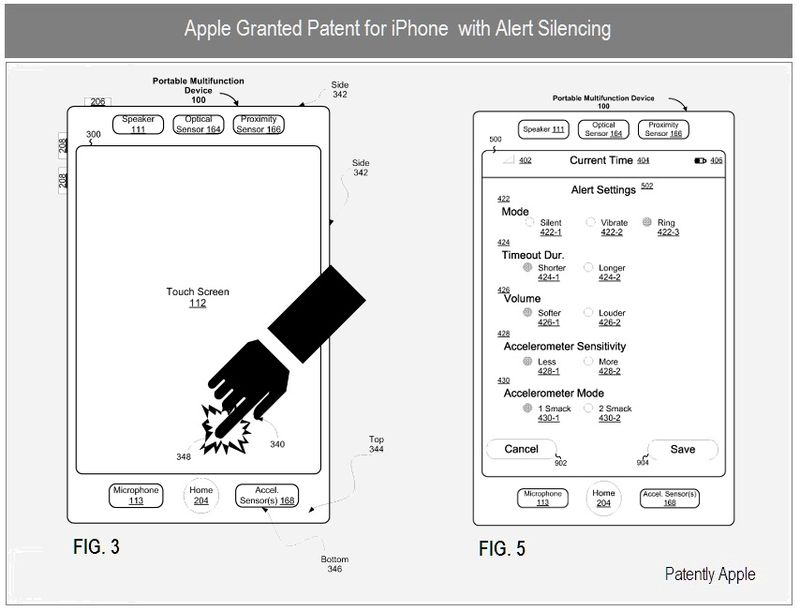 Tunable antennas for handheld devices: A compact tunable antenna for a handheld electronic device and methods for calibrating and using compact tunable antennas are provided. The antenna can have multiple ports. Each port can have an associated feed and ground. The antenna design can be implemented with a small footprint while covering a large bandwidth. The antenna can have a radiating element formed from a conductive structure such as a patch or helix. The antenna can be shaped to accommodate buttons and other components in the handheld device. The antenna may be connected to a printed circuit board in the handheld device using springs, pogo pins, and other suitable connecting structures. Radio-frequency switches and passive components such as duplexers and diplexers may be used to couple radio-frequency transceiver circuitry to the different feeds of the antenna. Antenna efficiency can be enhanced by avoiding the use of capacitive loading for antenna tuning. Granted Patent: 7,671,804.