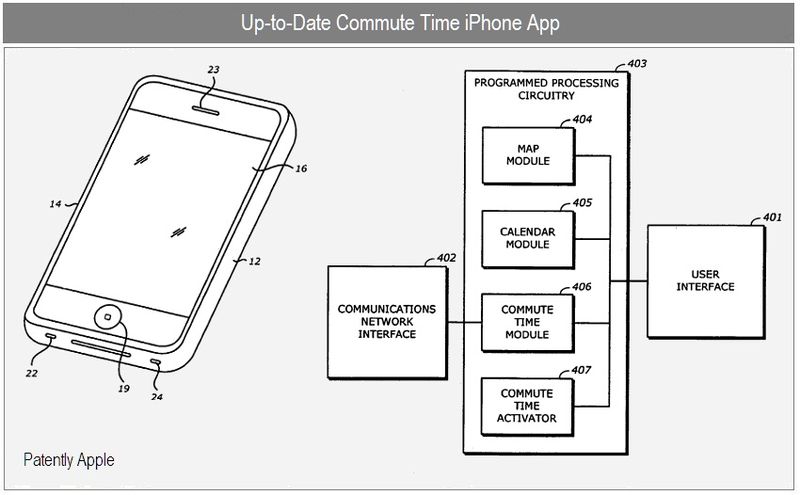 On March 18, 2010, the US Patent & Trademark Office published 17 patent applications from Apple Inc. The notables within this group include one that we covered earlier this morning titled "iGroups: Apple's New iPhone Social App in Development," in addition to another relating to an "up-to-date commute time" application for Apple's iPhone. This wild and crazy app will help you with your commute to work on time by notifying you of traffic problems and new routes to consider while automatically rescheduling your meetings that are in your iPhone calendar and even reset the clock on your coffee maker. Sorry it doesn't make breakfast. Other patents today include a look at Apple's iWork Pages template feature that even applies to their upcoming iPad. And lastly, there are two more patents that build on a January patent about new features that may be coming to Apple's Magic Mouse in the future.

In metropolitan areas, traffic congestion remains a major problem. The Texas Transportation Institute reports that, in 2005, the annual delay experienced by a traveler during peak times in the Los Angeles area is 72 hours and 46% of the delay is caused by incidents including car accidents and construction. As a result, the increased fuel consumption due to travel in congested conditions rather than in free-flow conditions is 57 gallons per peak traveler in 2005.

Today, commuters may also turn to the Internet to obtain up-to-date traffic information and estimated commute time. Numerous websites on the Internet (e.g., www.SigAlert.com) allow the user to view the current traffic conditions on the freeways including the speed of travel and the location and time of accidents. Other websites (e.g., Google Maps) provide the user with an estimated commute time for a selected route.

In some embodiments, other applications on the mobile device may be affected by the up-to-date commute time. For instance, if the commute time is longer than an expected time, which may be manually set by the user or automatically computed based on a history of stored instances of the commute time, adjustments may be made to the applications to reflect that the user has a shorter amount of time to prepare for departure on her commute or that her commute is longer. For example, a previously set alarm wake-up time may be adjusted to an earlier time, a louder music selection may be played at the alarm wake-up time, or a greater number of newsfeeds may be downloaded to the mobile device (to be experienced by the user during her longer commute). In one embodiment, the selected music playlist or the number of downloaded newsfeeds may be timed to correspond to the commute time, e.g. the total length (in terms of time) of the playlist or the downloaded newsfeeds may be proportional to the commute time.

In one embodiment, based on the commute time, the activation time of a third-party device such as a coffee machine, an alarm, and electronic calendar may be adjusted. For example, if a longer commute time is reported such that the user needs to wake up at an earlier time to compensate for the increase in travel time; the coffee machine may be activated to start brewing at an earlier time as well.

In one embodiment, a user interface of the device may present, via visual and/or spoken output, the current commute time prior to a calendar event associated with the commute, in order to ensure that the user is not late to the location of the event.

The above summary does not include an exhaustive list of all aspects of the present invention. It is contemplated that the invention includes all systems and methods that can be practiced from all suitable combinations of the various aspects summarized above.

This patent is all about Apple's Pages '09 template features. It relates to the use of Pages on a computer such as an iMac or MacBook but also interestingly points to devices like the iPhone, iPod touch and now we know that applies to their upcoming iPad. 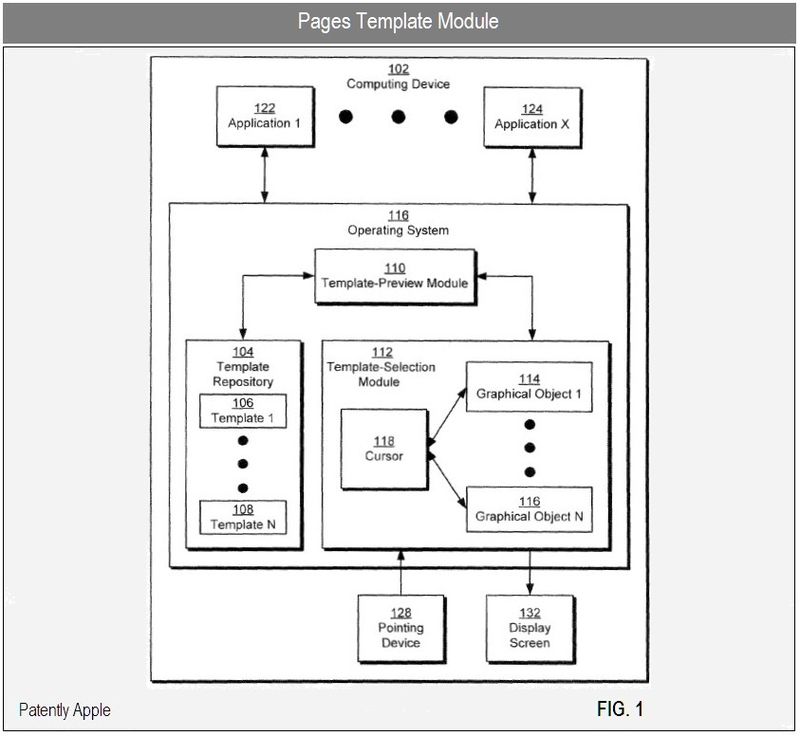 The patent specifically states under patent point 34, that "In one or more embodiments of the invention, pointing device 128 may be a mouse, a touch pad, a finger or a stylus on a touch-sensitive display…" Unfortunately, the specifics of any unique iPad feature is absent from this patent, if in fact there is any difference beyond accommodating touch. Time will tell on that one. 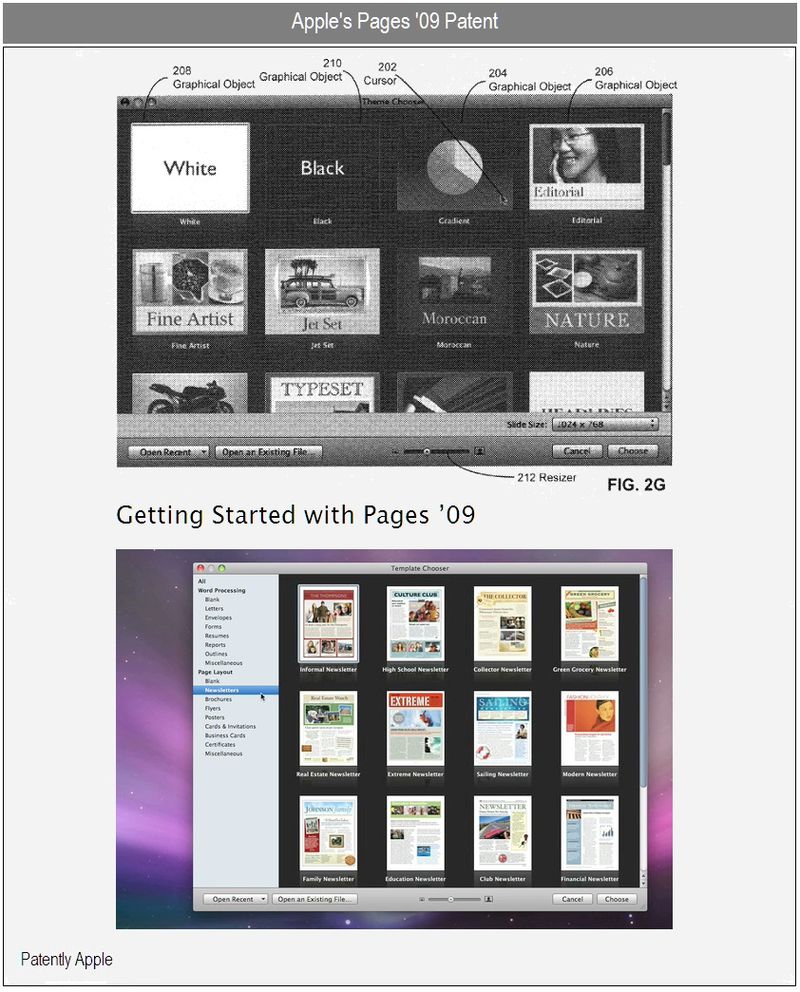 For more information on Pages' templates see the video on this page.


Patent - Using Measurement of Lateral Force for a Tracking Input Device: Apple's abstract states that systems and methods for using measurements of a lateral force applied to a motion-based input device are disclosed. The input device has a force detection module operable to detect lateral forces applied to the input device and generate force data representative of the applied lateral forces. The system also includes a processor coupled to the force detection module. The processor is operable to initiate an event based upon the force data. Patent: 20100066669 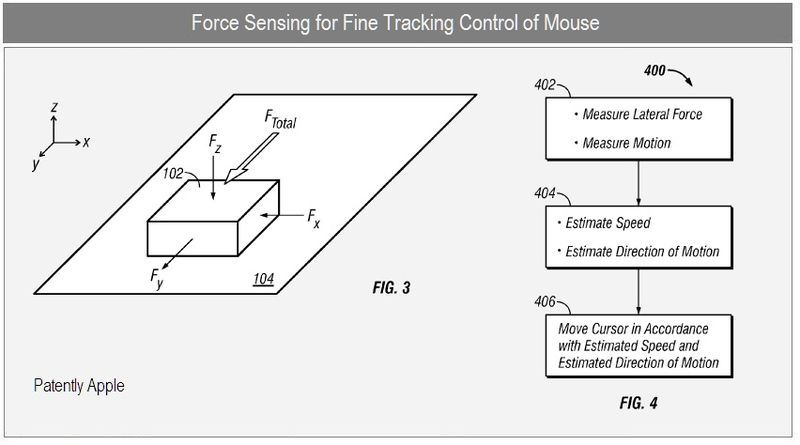 Both the force and lateral sensing patents noted above relate to Apple's major patent on a new mouse design that was uncovered in our January 2010 report titled "Apple Could Advance Gaming & Paint in Magic Mouse Upgrade."

Continuation Patent - Multimedia Data Transfer for a Personal Communication Device: Apple's continuation patent 20100068991 was granted to Apple in June 2009 under patent 7,546,083. There's no exclusivity to this patent by anyone making such a claim today.