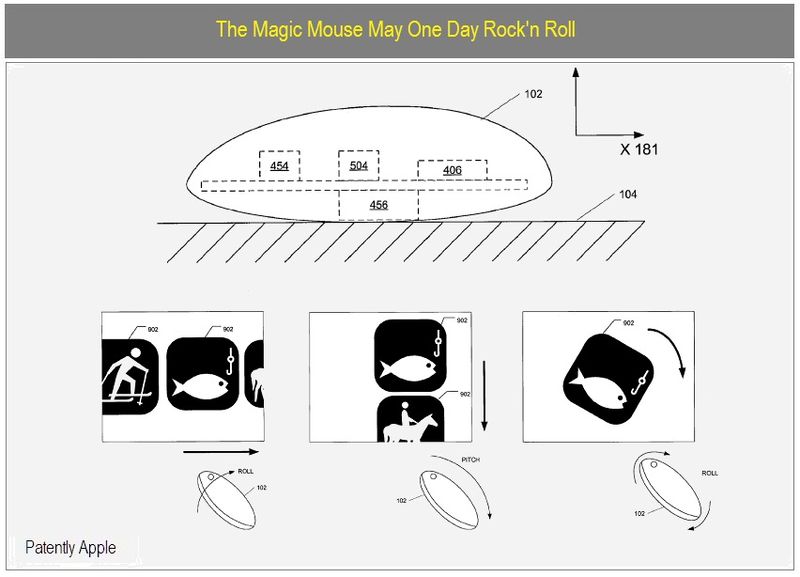 On February 18, 2010, the US Patent & Trademark Office published a patent application from Apple that reveals one of the next possible chapters for Apple's Magic Mouse. Apple introduced the world's first Multi-Touch Mouse this past October. The Magic Mouse features a seamless touch-sensitive enclosure that allows it to be a single or multi-button mouse with advanced gesture support. Using intuitive gestures, users can easily scroll through long documents, pan across large images or swipe to move forward or backward through a collection of web pages or photos. In January of this year, we were able to see the first installation of technologies related to advancing the Magic Mouse and today, Apple sheds more light on the advances that they're considering. Today's patent focuses on introducing a "rotatable mouse" using new sensors and a triple-axes gyroscope that detects the roll, pitch, and yaw of the mouse. That translates in allowing the user to tilt the mouse one way to cause a horizontal scroll and another way to cause a vertical scroll and yet another to tilt a graphic as shown above. The other change that you'll notice in the graphic above is that the bottom of the mouse is described in terms of it having a convex bottom design so as to make it easier to cause scrolling and other events by simply rocking or rolling the mouse. It's so simple, that it's brilliant.

Examples of the invention as described herein allow for additional movement of a mouse adapted to operate on a support surface. The examples are described herein primarily in the context of having a rotatable mouse situated on the support surface where a rotation of the mouse relative to a pivot point translates into a particular event.

As an example, such a mouse has a bottom surface with a convex shape. This convex shape allows the mouse to be rotatable on the support surface. This mouse includes a surface tracking sensor that detects translational movement of the mouse along the support surface. Additionally included are one or more orientation sensors that detect the rotational movement of the mouse. 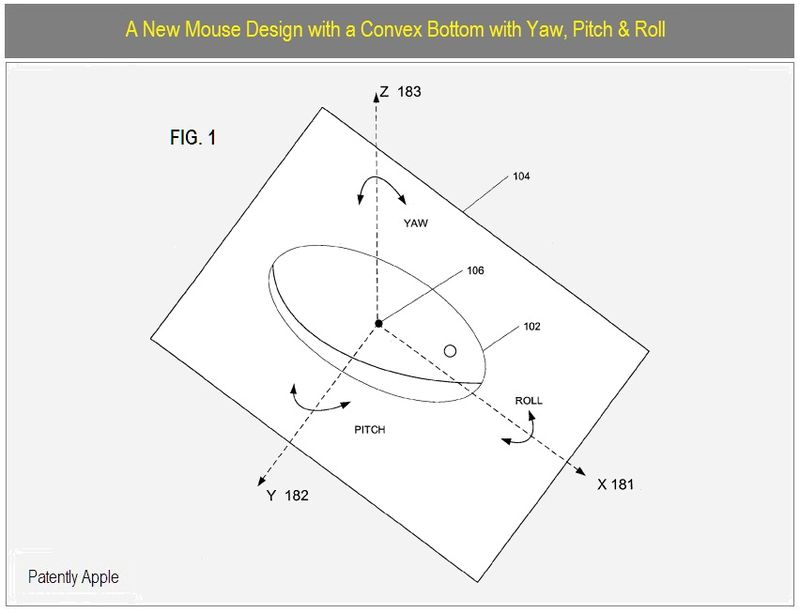 Apple's patent FIG. 1 depicts a perspective view of an example computer mouse 102 that is adapted to operate on a support surface 104. As depicted in FIG. 1, the bottom surface of the mouse has a convex shape, where a central portion is curved and protrudes outwardly relative to relatively peripheral portions of the bottom surface. This rounded bottom contacts the support surface at one or more pivot points, such as pivot point 106. A "pivot point," as used herein, is a point at which the mouse rotates.

The Heart of the New Mouse

Apple's patent FIG. 4 depicts a schematic diagram of a machine in the example form of a rotatable mouse that includes orientation sensors 402, surface tracking sensor 404, and controller 406, which may communicate with each other via bus 408.

A Magnitude of Rotation: Processing may also include the translation of input signals from the orientation sensors into magnitudes of rotation. A "magnitude of rotation," as used herein, refers to an amount of rotational movement of the mouse that may be expressed as degrees, a one byte value having 256 levels of resolution or other values. As an example, the magnitude of rotation that defines a rotation of the mouse may also range from -128 to +127, where a negative value defines a clockwise rotation while a positive value defines a counterclockwise rotation. The range of values also depends on the resolution of the surface tracking sensor 456. It should also be appreciated that the translation of input signals into magnitudes of rotation may include a variety of well-known processing techniques, such as filtering and integrating the input signals from the orientation sensors.

The Controller: The controller 406 may also include an analog to digital converter (ADC) 458 for converting analog signals from analog devices, such as gyroscopes and accelerometer 454, into digital signals. It should be appreciated that the gyroscopes and the accelerometer may also be digital, and the electrical signals from such digital devices are not processed through the ADC 458. The controller may directly transmit the events in the form of a control signal to a computer by way of wireless communication (e.g., Bluetooth) or direct connection (e.g., Universal Serial Bus). It should be appreciated that the control signal transmitted by the mouse may include a variety of information items. In an example, the controller may transmit a control signal with the two-dimensional coordinates, information identifying the rotational movement (e.g., roll, pitch or yaw), and the magnitude of rotation, directly to the computer. Alternatively, the controller may further process the two-dimensional coordinates and magnitude of rotation into events, which is explained in more detail below, and transmit such events in the form of a control signal to the computer.

Apple's patent FIG. 5 noted above depicts another side view of the mouse for operation on a support surface 104. With reference to the coordinate system of FIG. 1, this side view is a view along the X-Z plane. As depicted in FIG. 5, the mouse includes a gyroscope 504, an accelerometer, an optical sensor, and a controller, which may communicate with each other via bus. In this example, the gyroscope is a triple-axes gyroscope that detects the roll, pitch, and yaw of the mouse. The accelerometer is used to detect the acceleration of gravity for use in calibration of the gyroscope. 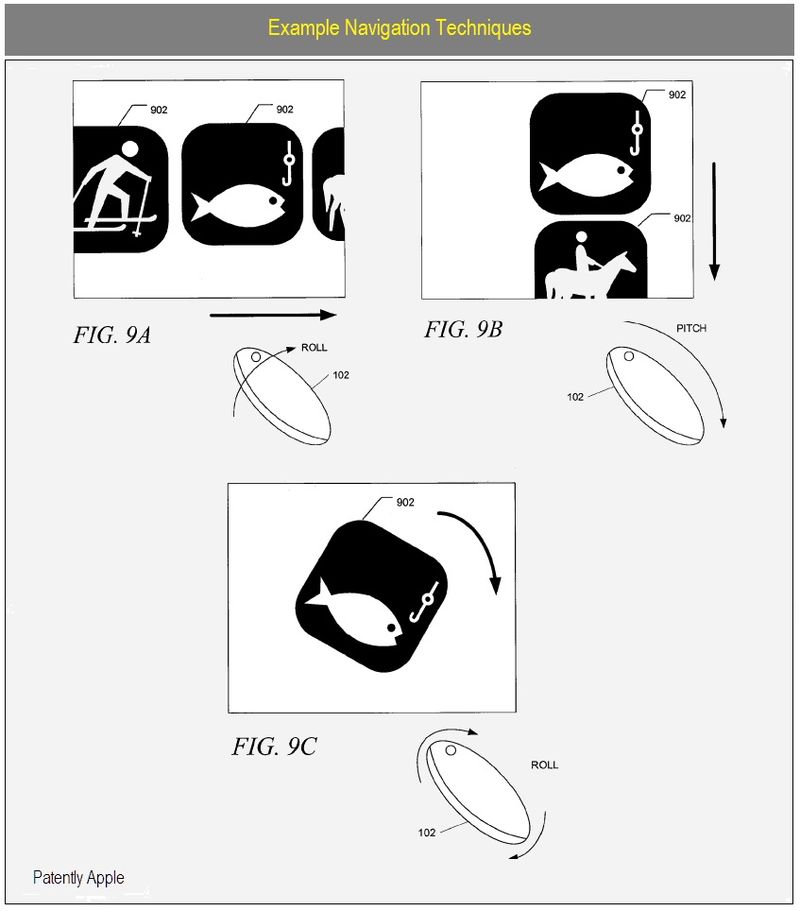 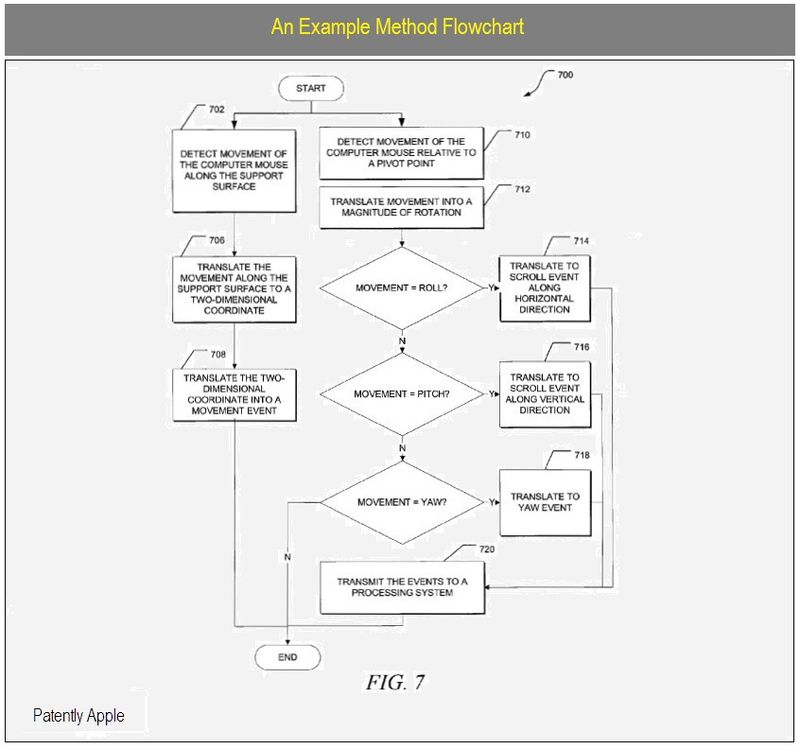 Two additional patent applications noted as 20100039394 and 20100042358 invented by Apple's Farshid Moussavi - may add to the overview of this new mouse or Magic Mouse upgrade. On the other hand, the technology may better relate to Apple's new 3D remote patent application published in late December 2009 being that it relates to "video game consoles, set-top boxes, televisions, personal computers, digital video recorders" and more.

Patent application 20100042358 relates to technology for monitoring motion of electronic input devices, and more particularly to technology for motion plane correction of motion-based input devices. The invention is directed to methods and apparatuses for reducing or eliminating tracking errors associated with moving an accelerometer based tracking device, or other force based tracking devices, at a tilt with respect to a plane normal to the direction of the gravitational force.