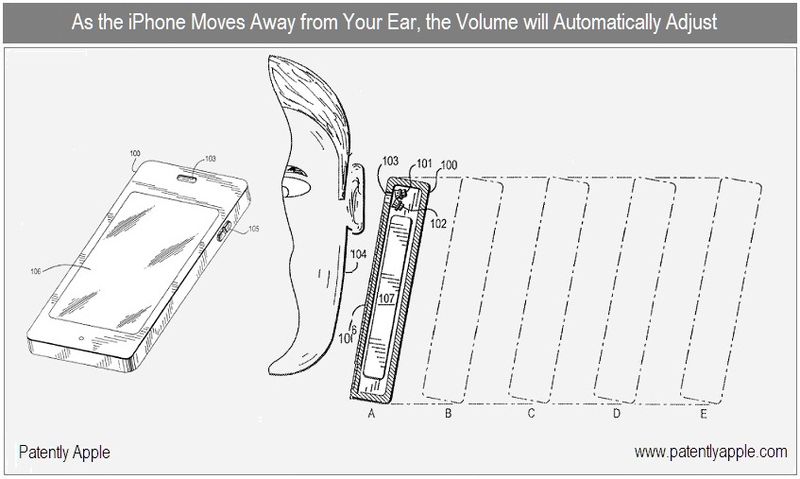 Yesterday, the US Patent & Trademark Office published some sixteen Apple patents, some through the names of their own engineers. Amongst these patents were two very cool ideas in respect to a signet based security system and a new way to control some iPhone features like voicemail through simple finger swiping motions across the backside camera. In today's report we'll take a look at three minor iPhone patents. Two of the patents are interesting even though they don't introduce anything overly flashy and breathtaking. Sometimes, practical technology applied just right is just as beneficial to users as the fancier stuff is. The first patent introduces us to a new automatic volume adjuster for the iPhone. In the future, when you pull the iPhone away from your ear, for whatever reason (as indicated in the graphic above), the volume will simply increase so that you don't miss a word. Apple will apply one of two methodologies to achieve this result. The second patent illustrates that Apple is considering advancing their acoustic transducer technology and in doing so will likely change the iPhone's standard earpiece to that of a microperforated grill-like structure.

There may be several different ways to sense the proximity of the device to a user or other surface. For example, there may be active methods in which the device includes both an emitter and detector of some kind of energy (e.g., infrared light or low-intensity sound waves). By measuring how much of the emitted energy is returned to the detector, and/or how fast it is returned, proximity of the surface that is reflecting the energy can be determined.

There also may be passive methods, which may be particularly well-suited for devices like mobile telephones that have a mode of use in which they are literally up against the user. For such devices, light sensors can be provided on the surface facing the user, and the amount of light reaching the sensors can be used as a measure of how close the device is to the user (e.g., no light means the device is touching the user).

Certain devices may be capable of sensing a user's touch (e.g., capacitively or electrostatically), and that touch-sensitivity also could be used to determine proximity. For example, Apple's iPhone has a touch-sensitive screen on its front surface that is normally held against a user's face during telephone conversations. That touch-sensitive screen is provided to allow user inputs to the device, but also could be used to determine, during a conversation or other audio event (such as an audio file playback), how much of the user's skin is in contact with the device, which is an indicator of proximity.

The iPhone May Shift to a Microperforated Grill-like Receiver Structure

In a second related patent about a "Multiple-Use Acoustic Port" we see Apple's patent figures 2 and 3 below. In FIG. 2, a mobile telephone 200, and transducers 101, 102 may be a receiver and a speaker behind earpiece port 203. In this embodiment, a microphone (not shown) is located behind a separate port 204. 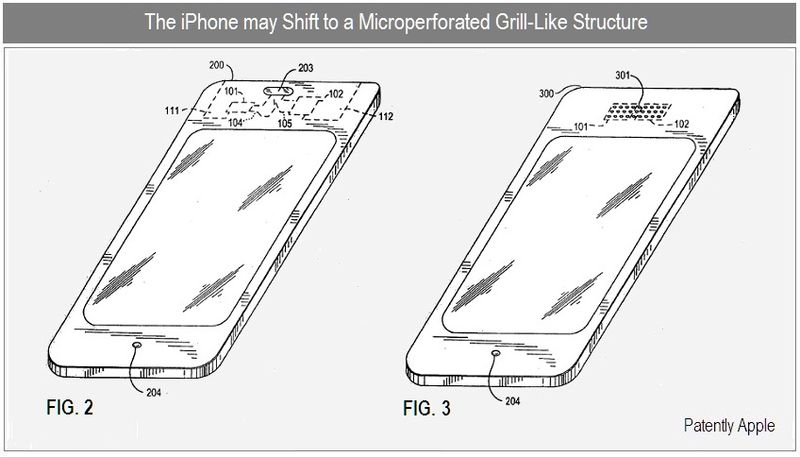 In an alternative embodiment 300 shown in FIG. 3 above, we see a similar mobile phone as shown in FIG. 2 but with an acoustic port 303 being a microperforated grill-like structure not readily visible to the naked eye (microperforations 301 are exaggerated for illustration), with the transducers 101, 102 located behind different portions of the microperforated area.

You could file this one under the category: How'd they do that? 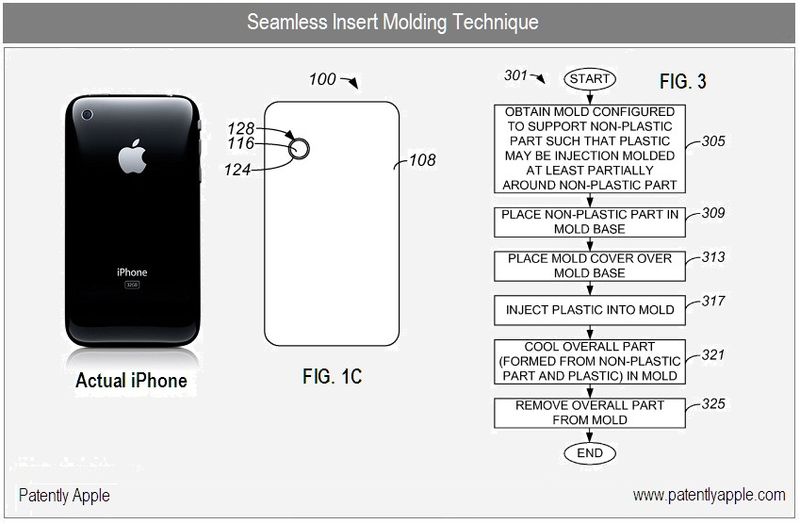