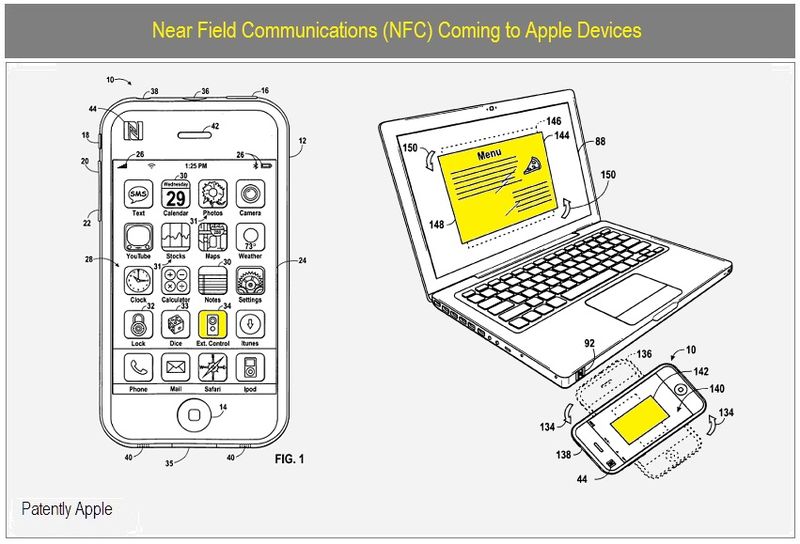 In November 2009, the US Patent & Trademark Office published a patent application from Apple that revealed various concepts behind a newly advanced application in development code named Grab & Go. Apple's patent introduced us to simplified data transfer technologies such as Near Field Communication (NFC) Interface and Sony's new TransferJet - which is now closer to being commercial viable. The new application discussed in the November patent would allow users who live in the fast lane to transfer data quickly between devices like their desktop and iPod by simply tapping their iPod against an iMac, for example. In today's patent we see that Apple is seriously detailing how they intend to update the iPhone and other Apple devices with NFC. The focused devices in this patent are no doubt the iPhone and MacBook. Apple provides us with some rather simple examples of how this will work but in concert with their Grab and Go app, we could see that this is a trend that will no doubt work itself to market over the next 24 months or so. The one interesting twist that Apple reveals is how the iPhone with NFC could be used as a work pass-key to enter your office, building or department – and eventually how this concept could expand to open your home or apartment door, car door and in theory, a hotel room door and so forth. Get ready, Near Field Communications is coming to the iPhone.

While Apple's patent may have started on the topic of motion used in video games for the iPhone, we eventually get to the heart of the patent which is about Near Field Communication or NFC being integrated into the iPhone, MacBook and beyond.

Apple's patent FIG. 2 shown below is a block diagram illustrating various components and features of the device 10/iPhone - in accordance with one embodiment of the present invention. The block diagram includes motion sensing 62 and the NFC interface 44. An Example of an iPhone controlling a MacBook via NFC

Accordingly, Apple's patent FIG. 10 noted above, also illustrates an iPhone (or iPod touch) using a motion-based input to control the display of a document on the external device/MacBook. 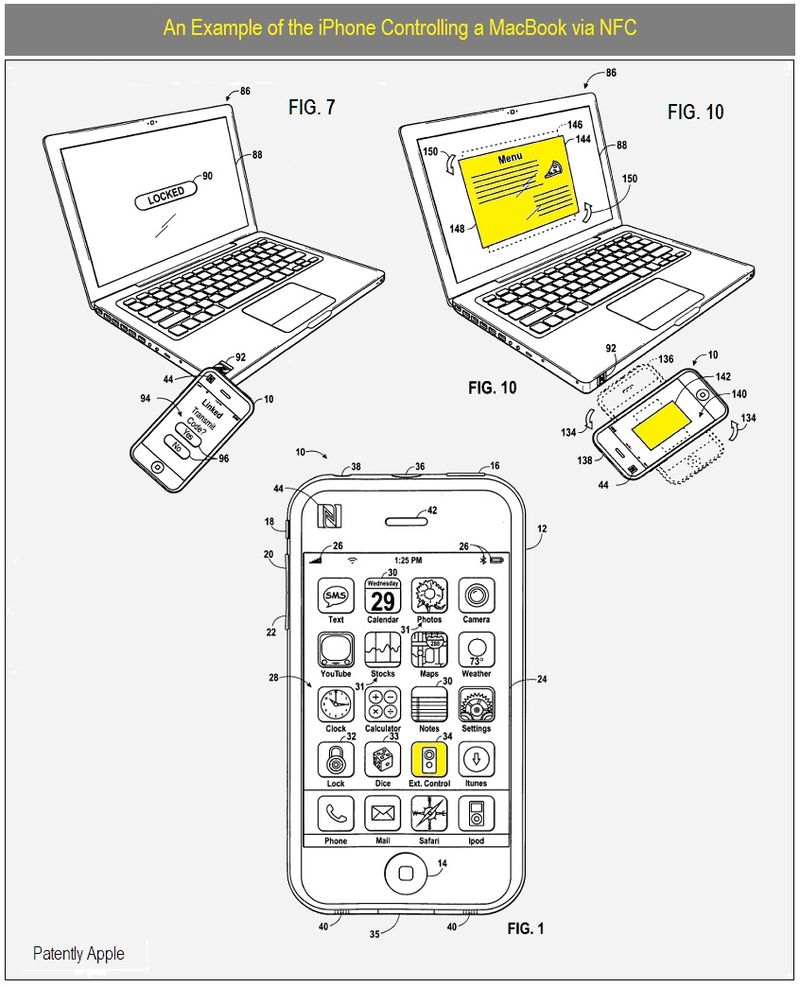 As shown, the iPhone has been rotated to the left, as indicated by the arrows 134, from its original position 136 to a new position 138. A screen 140 of the GUI 28 is displayed on the iPhone to facilitate control of the MacBook. The iPhone's screen 140 may be displayed in response to selection of the external control icon 34 (noted in yellow in FIG.1 above) or it may be displayed automatically upon establishment of the near field communication channel. The screen 140 includes a graphical element 142 depicting a document. The graphical element 142 may represent a corresponding document 144, shown here as a menu for a pizza restaurant, displayed on the external device display 88.

In other embodiment, the iPhone's screen may display the graphical element 142 to assist the user in controlling the external document 144. The document rotation techniques may allow the user to rotate documents and images such as maps, menus, photographs, and the like. Hmm, that's an interesting twist.

In certain embodiments, the motion data sensed by iPhone may be transmitted over a network connection established between the MacBook and the iPhone. The NFC communication link may be used to establish the connection, and then once established, the iPhone may be moved further from the MacBook. This may allow external control from a longer distance. 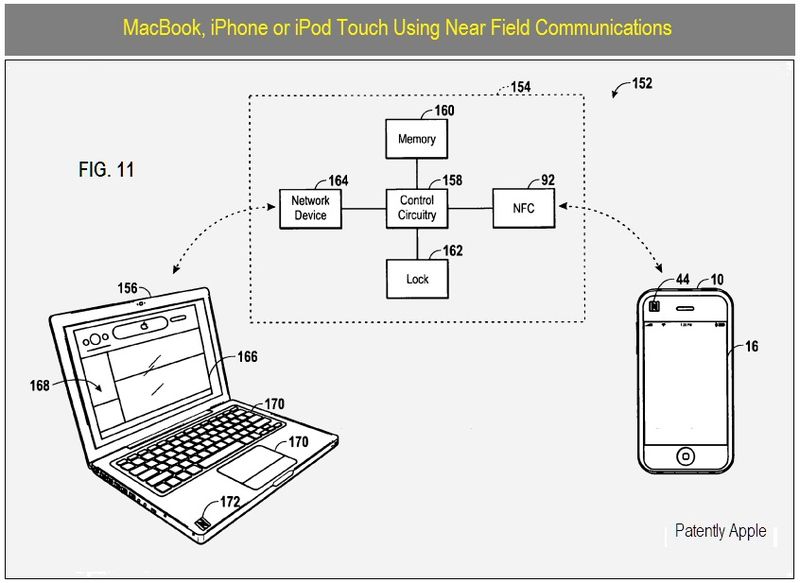 The electronic device 154 also may be incorporated into a MacBook, a computer, personal data assistant, portable media player, cellular telephone, or the like. The MacBook also may include an NFC interface 172 for enabling NFC communication with the electronic device 154 and/or the iPhone. Note the "N" symbol within a box is shown on the devices in the graphic above under varying numbers such as 44, 172 and 92.

The electronic device 154 also may include a network device such as a network interface card (NIC or 164 not shown) that allows the device 154 to communicate with a MacBook over a network, such as a LAN, PAN, WAN, or the Internet. Using the MacBook Keyboard, a user may program the code for the lock 162. In certain embodiments, the GUI noted as 168 on the MacBook is the iTunes web service to facilitate programming of the electronic device 154.

While we're on the topic of opening locks, it should be noted that patent discusses how you'll be able to use an NFC based iPhone, for example, to open up your office door or, for that matter, any door that would have a corresponding NFC chip incorporated – be it your home door, car door etc. 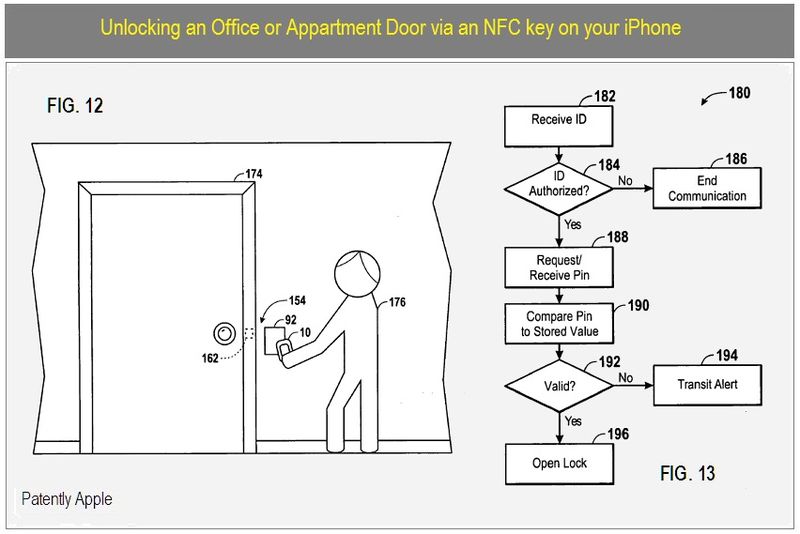 Apple's patent FIG. 12 illustrates one embodiment of the system 152 shown in FIG. 11 above. As illustrated, the electronic device 154 has been incorporated into a door 174. The lock 162 is disposed within a frame of the door and is configured to actuate to allow the door to open upon receipt of the correct code. The NFC interface 92 is disposed next to the door. The user 176 may bring their iPhone in close proximity to the NFC interface to enable communication between the iPhone and the electronic device 154. The iPhone may then be used to enter a motion-based input, such as a security code, and transmit the code to the NFC device 92.

Apple's adjoining patent FIG. 13 illustrates a method 180 that the electronic device 154 may use to open a lock in accordance with one embodiment. The identification information may include a serial number, cellular telephone number, or other identifier of the iPhone.

On one side, the idea of an NFC lock on my doors sounds creepy and unsecure. On the other hand, there's an advantage. If someone breaks down your door is attempting to pry it open, or has tried to use a code to open your door unsuccessfully, you'd be notified on your iPhone that there's an incident in progress. You'd then be able to notify the appropriate authorities.