Operation Apple: What will they Call their Tablet? 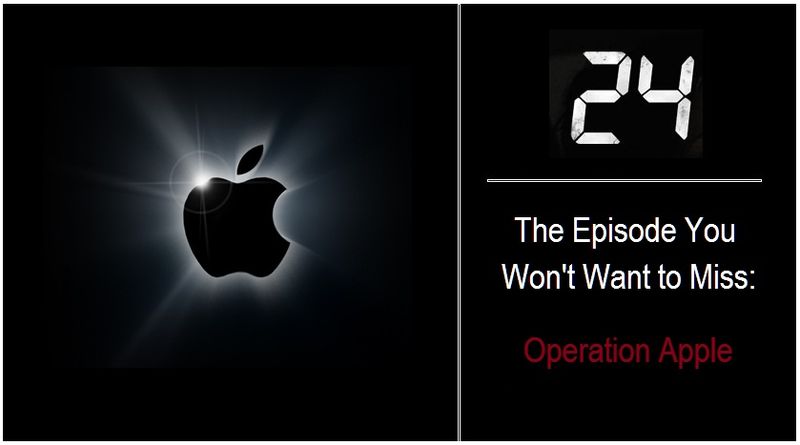 My favorite television drama show, ever, is 24 – bar none. Once a new season begins, it has me hook, line and sinker. It's a drama that's over in the blink of an eye leaving you stranded until the next nail biting episode airs the following week. Well, for Apple fans, the drama leading up to tomorrow's event has been the same. Patently Apple posted a three part series called Apple: The Tablet Prophecies last week and there's been excellent wall-to-wall news coverage from other Mac sites, including rumors - to entertain everyone. The drama will end in about 24 hours and "Operation Apple" will be revealed. This report is really a follow through on a series of reports about possible brand names for Apple's coming tablet. As many already know, it's really been a passion, if not a crusade of MacRumors - to find Apple's possible branding of the tablet. Patently Apple has pointed to MacRumors TabletMac report and added a few details of interest. AppleInsider provided us with an overview of the rumors this past December and in this report – we're going to confirm some of these facts that have shown up in the Canadian Trademark Office. There appears to be at least one distinct connection between Apple's own "Message Pad" filing and the three rumored candidates that indirectly point to Apple. At the end of the day, it may not matter one iota if Apple has chosen to brand their tablet with something altogether different. Yet until such time, take a moment to review the coverage that these three rumored names hold and perhaps it'll spark you to add what you think Apple will call the tablet tomorrow.

What will Apple Brand their Tablet?

In 1993, Apple trademarked "Message Pad" in Canada using Baker and McKenzie LLP, the world's leading global law firm (as they claim). Apple went on to use that brand name for their Newton MessagePad. You'll notice below that "Message Pad" has first of all, been renewed under Apple Inc. so that it's current. In addition, you'll note the fact that this same law firm listed under Message Pad is the very same law firm listed on all three rumored trademarks in question today: iPad, iSlate and Magic Slate.

As you'll see for yourself, iSlate, filed for in November 2006, is the oldest of these possible tablet brand candidates – yet doesn't sufficiently cover what is required in a 2010 tablet. Yet interestingly, on November 11, 2009, a request for an extension was filed for until May 21, 2010. In this patent, the owners first filed for the trademarks in Trinidad and Tobago, a classic Apple hiding place for secretive trademarks that they need under lock and key until a product is released. We'll likely see that indicated again on Apple's tablet 2010 US trademark filing this year.

On the other two trademark candidate's, mainly iPad and Magic Slate, we see that they both have modern coverage including features such as GPS, telephony and television. Yet at the end of the day, the Magic Slate trademark is the only one specifically covering MP3, common on Apple's iPod trademark filings, and online browsing – which is going to be a must for a modern Apple tablet.

Shown below are the Canadian Trademark documents in full for your review - so that you could see for yourself that there's been no shenanigans. It should also be noted here that AppleInsider had reported that "Slate Computing, owner of the 'iSlate' trademark may be a shell company set up by Apple to quietly obtain U.S. trademark protection for the name."

Of course, Apple may have something completely different in mind, as do you. So take a peek and then weigh in. Do you think that Apple will choose one of these rumored brand names or will they surprise us with something totally original?

If you have an idea about the tablet's branding that has been driving you crazy because no one in the Mac press has covered a particular angle that you see as obvious, then by all means, share it with us and have some fun.

Report Graphic: The Apple in the opening graphic came from Photobucket.

Believe it or not, there is a rumor that the Apple tablet device will be featured in an episode of "24."

It would make sense, from a marketing point of view, for Apple to put the new device on the show. Over the years, Apple has done many product placements on 24 and just about every other movie or TV show featuring computers.

I'd like to see Jack call in an air strike using the Apple tablet device. It would be this simple:

I like HiLife that Jesse has put forward. Whoa, nice name. It plays off of iLife, iWork, iPod, Wi-Wi with a sense of the tablet being highly sociable etc.

+1 for Barbarossa. I've stated on other forums that I think it's time to bring back "iBook" as a product name.

+1 for 24 also. Starts off with a bang each season, and usually the first 3 or 4 hour story arc has nothing to do with the season climax, so it's never predictable. (And Annie Wersching being such a doll adds extra appeal IMHO.)

When it comes to a future notebook-tablet hybrid, I'm hoping that the iBook brand will rightfully return as well, Barbarossa.

Personally, I think Apple should revive the 'iBook' name. They already own the rights, the tablet like the first iBook before it will be an innovative piece of gear and, of course, it's being touted as an "internet book."

The name "iPad" has already been savaged by parodies on TV and "iSlate" just sounds strange to me.