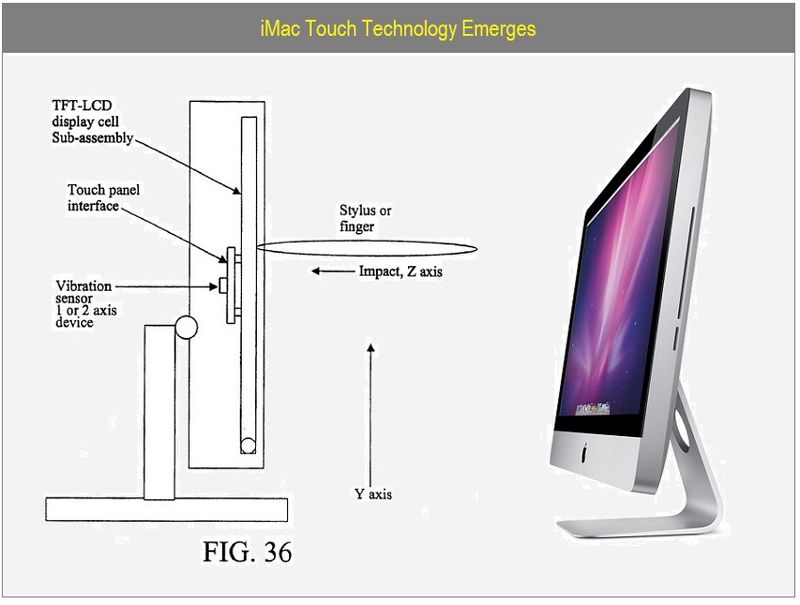 Buried at the tail end of a very detailed touch screen technology patent published this week, we find a specific patent figure dedicated to a desktop application for this new touch technology. The following is found in the patent:

"To alleviate concerns regarding whether the user touched the display or is merely "hovering" in the vicinity of the display, the present inventors determined that a sensor should be incorporated within the display to sense pressure (e.g., vibrations). The output of the vibration sensor is coupled to the processor so that it may be determined when the user touched the display, determine when the user did not touch the display, or otherwise provide additional confidence to the determination as to whether the user touched or did not touch the display. Referring to FIG. 36, any suitable location for the sensor may be used, such as for example, interconnected to the backside center of the chassis. Any suitable sensor may be used, such as for example, micro-machined accelerometers, piezoelectric devices such as PZT or PVDF, capacitive sensors, resistive sensors, inductive sensors, laser vibrometers, and light emitting diode vibrometers. On way of selecting when a touch occurred is when the minimum of impact energy as a given frequency range has been reached. The sensor may also be used in conjunction with the light sensitive elements to determine the location of the touch.