On January, 7, 2010, the US Patent & Trademark Office published a patent application from Apple that reveals one of the next chapters for Apple's hard drive systems. According to Apple, "Hard drives can be susceptible to mechanical failure or damage due to a physical shock or vibration. Thus, certain hard drives utilize sensors that detect the physical orientation, surrounding environment, or movement of the hard drive and, thereby, detect the occurrence a shock event. One such sensor is an acceleration sensor. One problem with existing shock sensing mechanisms is that additional components, such as an acceleration sensor, are required to enable shock detection based on surrounding environmental conditions. The additional components can add cost, use limited circuit board space, and increase hard drive circuitry size." Apple's patent addresses deficiencies in the prior art by providing systems, methods and devices that enable the detection of a shock event in a less complex and costly manner without the need for sensing surrounding environmental conditions. Secondly, Apple introduces us to what they describe as an intelligent storage device. Apple's technology will cover the iPhone, Mac desktops and notebooks. The only thing missing in this patent is a reference to future solid state drives.

In Apple's patent storage device 400 illustration shown below, we see an intelligent storage device being presented (in classic napkin form, no less) to us that includes a processor (402), a motor controller (404), a motor driver (406), a current sensor (408), a memory (410), a communications interface (412), at least one computer readable medium (414 - e.g., a magnetic disk), an actuator (416), a read/write head (418) and/or a disk motor (420). A bus (422) may interconnect the interface, the read/write head, RAM and/or the sensor. The interface may enable electronic communications between the storage device to a host, such as computer system (300) of patent FIG. 3 noted below and in the report's opening graphic. 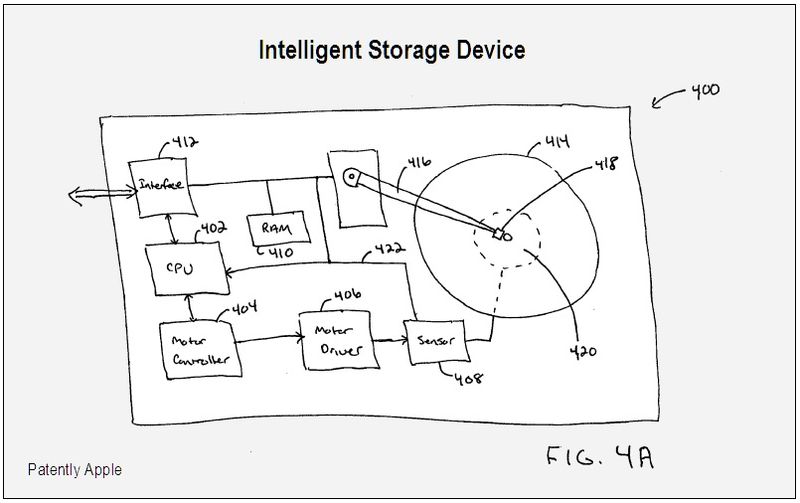 In one embodiment, the interface routes information and/or data to and from at least one computer readable medium. The interface may also include an embedded processor with suitable firmware for logging certain characteristic operational information, controlling the hard drive operations, controlling read/write operations, receiving sensor signals, and analyzing sensor signals (408).

In one embodiment, the processor and motor controller functions are integrated into a single chip or element. In certain embodiments, at least one non-volatile buffer is located in a reserved area of the at least one computer readable medium. For example, at least one buffer may include an error data, timestamp data; hard drive ID data, host system configuration data, hard drive status data, and shock event detection data.

The device may support self-monitoring, analysis, and reporting technology (SMART) to assist in failure analysis prior to sending a hard drive back to the manufacturer.