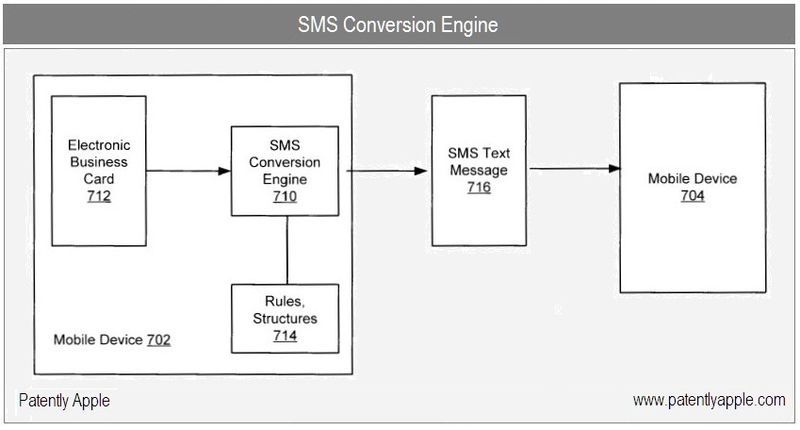 One of Apple's patent applications that were published late last week by the US Patent & Trademark Office almost snuck through without being noticed. This interesting patent generally relates to text messaging, and more particularly to sending and receiving of contact information via text message protocols. For example, a mobile device user may desire to send contact information (e.g., an electronic contact/business card) via SMS. Electronic business cards are typically marked up according to a particular file format (e.g., vCard). Conventional text messaging services are not capable of recognizing the markups associated with an electronic business card. As such, attempts to send an electronic business card as a text message will result in a receiving user being presented with a garbled mixture of contact information and inline markups. Apple's patent provides an excellent solution to rectify this problem. It should be noted that while there are at least eleven vCard apps for the iPhone available today, it appears that Apple is thinking of a secondary vCard solution of their own in the future. Currently, Apple's new iPhone 3GS offers a modern MMS vCard solution which clearly differs from today's patent focusing on a vCard solution for SMS.

A markup language is a set of annotations (or markups) to text that describes how the text is to be structured, laid out, parsed or formatted. It is common in many markup languages to have the text of a document intermingled with markup instructions in the same data stream or file. These embedded or "inline" markups can be processed by various applications, services and/or programs designed with such capability.

However, applications, services and/or programs without such capability are often forced to present the intended text along with the inline markups via a user interface. Such presentation can it make it difficult, confusing and/or aesthetically unpleasant for a user to view. For example, electronic business cards are typically marked up according to a particular file format (e.g., vCard). Conventional text messaging services are not capable of recognizing the markups associated with an electronic business card. As such, attempts to send an electronic business card as a text message will result in a receiving user being presented with a garbled mixture of contact information and inline markups.

Sending/Receiving a vCard via SMS 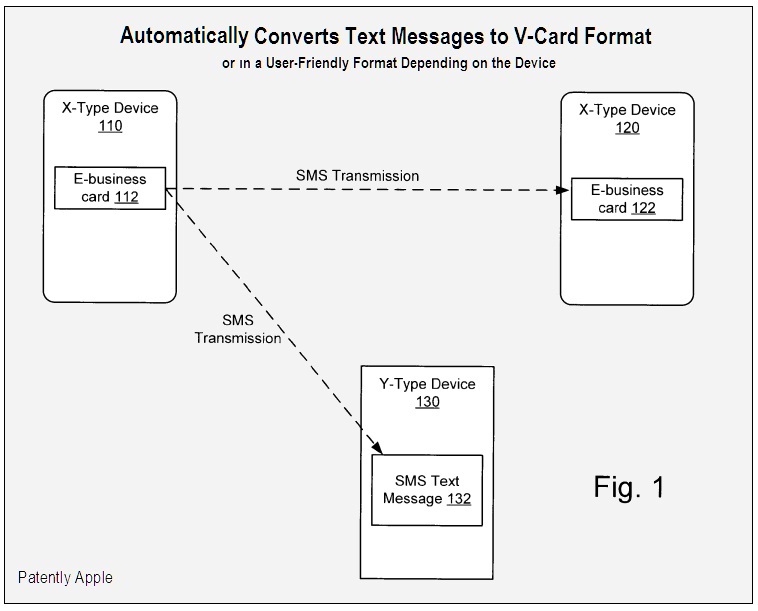 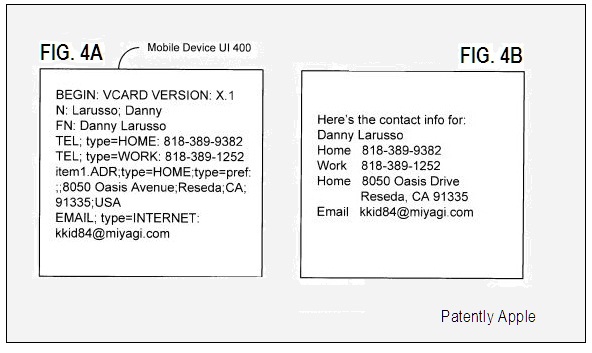 Remember that a Y-Type device is intended to represent any mobile device that is not equipped to send, recognize and convert an electronic business card from an SMS transmission. Patent figure 4A is an illustration of what a vCard transmission would look like between two Y-Types of devices. In contrast, patent figure 4B is an illustration of what an iPhone vCard sent to a Y-Type of device would look like: relatively clear and organized.

Apple's patent FIG. 7A is a block diagram illustrating various components of a mobile device used in various embodiments. Mobile device 702 includes storage for one or more electronic business cards 712. An SMS conversion engine 710 parses the electronic business card into various fields and marks up the fields using transparent text message characters based on various rules and structures 714. 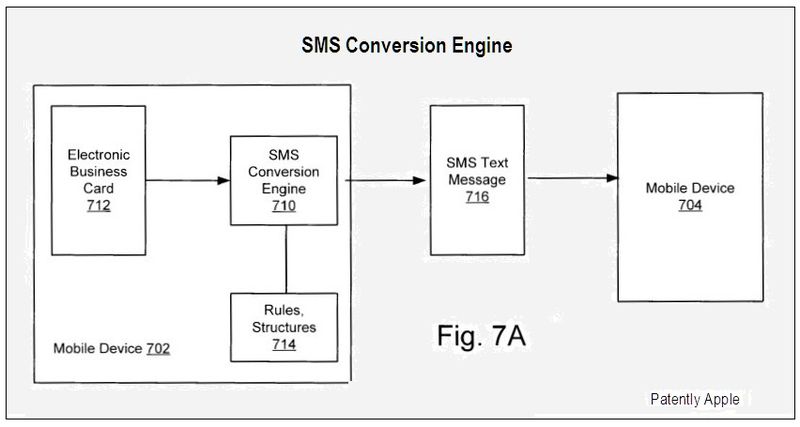 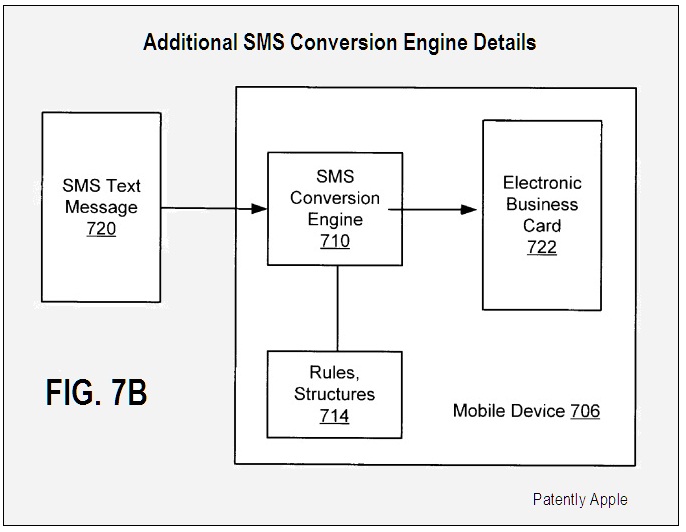 Apple's patent FIG. 1 illustrates a transformation of a rectangular window 105 displayed on a screen 101 into an arbitrary shape window 107 displayed on screen 102 as the window minimizes to a docking bar. As shown in FIG. 1, a rectangular child window 106, which is related to window 105, may be displayed on a screen 101. Child window 106 may be, e.g., a sheet that appears on a "save" panel, a drawer, a menu, and the like. Window 105 may have a shadow 104. A docking bar ("dock") 103 may be displayed on screen 101. The dock, as in Mac Operating System produced by Apple Inc., located in Cupertino, Calif., may be used to display frequently used applications, applications that are currently executed by the processor of the data processing system, or both. 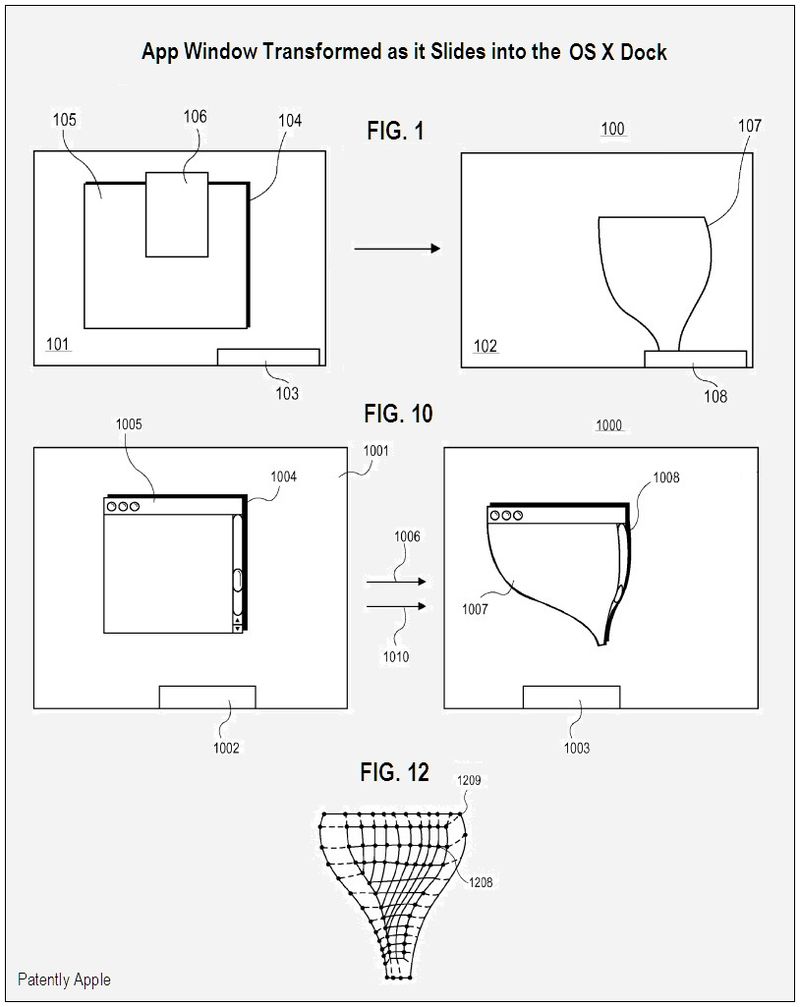