Every once in awhile we get a special glimpse into Apple's crystal ball and see what they're working on for the future.  Well, here we go again. Apple has been granted a patent for technology behind the implementation of large virtual keyboards. The concepts behind this technology are sweeping yet generalized. The patent could apply to a future notebook where no mechanical keyboard is present or apply to a future tablet, full desk-surface computer or multi-touch wall. On the flip side of the equation, Apple's patent briefly introduces us to two additional concepts. The first is the ability to incorporate a multi-touch display directly into garments of one sort or another. Think of a hoodie or ski jacket sleeve incorporating a simple flexible screen that could present the user with a simple incoming text message or tweet without having to fumble around in a subway or crowed bus to find their iPod or iPhone. The second concept that the patent introduces us to, is called the pen grip.  This yet-to-surface multi-touch gesture involves using an advanced hand-finger combination that will mimic the use of a pen for simple tasks like a signature. Although today's patent will likely add fresh fuel to tablet rumors, make no mistake about it: the concepts revealed in this patent go far beyond just a single application.

The key to this patent is that it presents us with a system to integrate multiple types of manual input into a given surface large enough to accommodate typing, multiple degree-of-freedom manipulation and, to a certain degree, coarse handwriting. In essence, the idea being conveyed here is that Apple is thinking of bringing new levels of touch technology to the table that will be available on larger than present day iPhone-type surfaces as noted in Apple's patent figure 1 below. 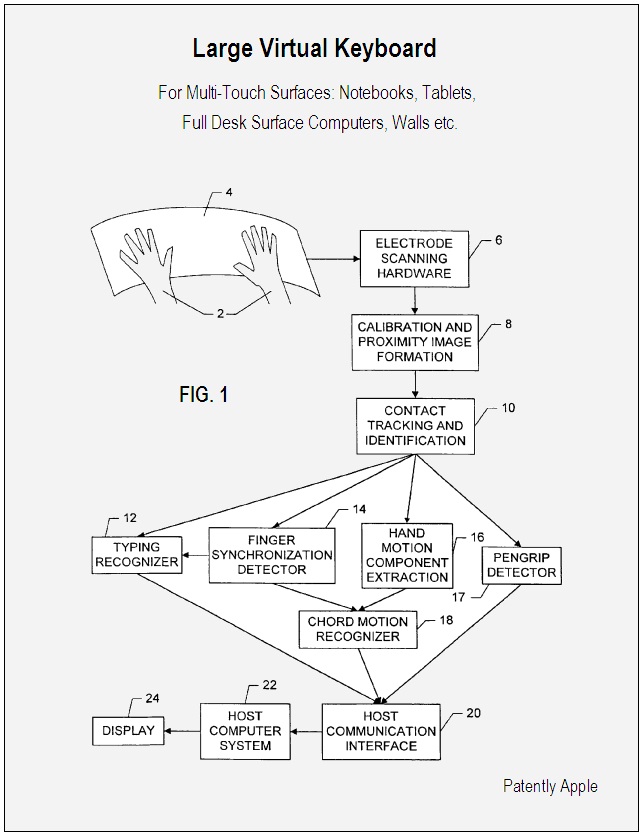 Apple's patent illustrates a system block diagram of the entire, integrated manual input apparatus. In a preferred embodiment, Apple describes a virtual keyboard by stating that "the surface is large enough to comfortably accommodate both hands and is arched to reduce forearm pronation.

One of the advantages of providing users with a virtual keyboard option is that it could be morphed to fit the user's natural hand layout. Apple refers to this as a layout homing gesture. This same technology could be further utilized in several future products that go beyond the desktop. Apple provides us with a tiny glimpse of this by stating the following: "This is especially helpful for multi-touch surfaces which are several times larger than the standard keyboard and [numeric] key layout, such as one covering an entire desk." Technically speaking, the technology could also be attributable to displays likened to those used by CNN during the 2008 presidential election. Extending that vision could also point to smart multi-touch virtual in-class chalk boards.

Beyond detailing the future capability of delivering a large two-handed virtual keyboard, Apple adds yet a surprising little detail of a yet another advanced touch capability simply referred to as the pen grip. What's so surprising about that? Well, first off, you won't be using a pen or a stylus or any pointed mechanical add-on apparatus.

Apple puts it this way: "Handwriting on smooth touch surfaces using a stylus is well-known in the art, but it typically does not integrate well with typing and pointing because the stylus must be put down somewhere or held awkwardly during other input activities. Also, it may be difficult to distinguish the handwriting activity of the stylus from the pointing motions of a fingertip. Thus, there exists a need in the art for a method to capture coarse handwriting gestures without a stylus and without confusing them with pointing motions."

The details of this new function clearly point to a surface that would have to be large enough to capture a palm and finger configuration that is in the form of a pen grip, to interpret such gestures accurately. That's not to say that a future Apple tablet couldn't support a stylus for specialized business or artistic centric applications, it's just that Apple is focusing on a more commercially acceptable multi-purpose touch-based tablet so that your hands can gesture, type and write simple messages or place a simple signature without having to use a separate tool. In the scenario of the large CNN type of display, the reporter may just want to scribble a note on the screen without a stylus. It's just a different need that's being addressed in the patent and doesn't represent a take it or leave it scenario. There's room for stylus, multi-touch and coarse hand writing tools on different devices.

The power of the technology presented in this patent could actually provide the reader with an obvious yet tantalizing array of future device possibilities. The most obvious, to me at least, is that of a future two-panel ebook that would look like a book when arranged vertically - yet provide the user with the ability to switch the unit around horizontally and use it as a standard notebook with a virtual keyboard. The patent however, doesn't provide us with any details on such a device: Rats!  Yet in the bigger picture, the concept is certainly within the scope and spirit of this patent.

In alternative embodiments, the patent describes a multi-touch surface that may be large enough to accommodate motion of one hand but be flexible so it can be fitted to an armrest or clothing. Imagining that kind of scenario is nothing short of - wow.

Think of an arm bangle wide enough to be a watch and an email system. It beeps and you simply raise your arm slightly to see who's sending you a simple email or text message. You could see an example of that scenario here. Yet Apple's granted patent takes this concept a little further in that your display could simply one day be incorporated right into your clothing – like a sleeve display – eliminating the need to pull anything out of your pocket like an iPhone, just to view an incoming text or tweet. It's business communications on speed.

Imagine a touch surface integrated right into a hoodie or ski jacket so that you could access your tunes while taking a jog or out on the slopes without fussing with an iPod. Well, that's going to be possible according to Apple's patent. It specifically states that there's "a cover for the multi-touch surface that permits the system to be sensitive to pressure exerted by non-conducting touch objects (e.g., gloved fingers) contacting the multi-touch surface."

Hmm, yes, frantically typing a message while scuba diving off the Great Barrier Reef: Hi Jo – The sharks are hungry today - have a nice life.

At the end of the day, chalk up yet another great granted patent win for Apple which presents us with a whole lot of new food for thought. In some minor respects, Apple has already implemented some of the evolutionary concepts behind this patent in the form of gesturing, like pinch scaling or using hand-chords etc. Yet the patent's primary focus is on a two-handed, full sized virtual keyboard. Now that they've been granted this patent, perhaps Apple will move on to the next phase of product development.

Apple credits Wayne Carl Westerman and John G. Elias as the inventors of granted patent 7,619,618 which was originally filed in Q3 2006. These two Apple engineers and inventors came to Apple via Apple's acquisition of Fingerworks. These same engineers were behind Apple's stunning nano-phone patent that resurfaced this past summer in an Australian patent filing. Whispers of a new mini or nano phone have resurfaced in respect to a possible Apple-Verizon phone deal for 2010.  Time will tell.

The idea of a dual display doubling as an ebook and notebook is one we might see in a couple of years. It just makes sense.

The other ideas laid out in the patent will more than likely involve licensing the tech to third parties to make the clothing etc. That's my take on it anyway.