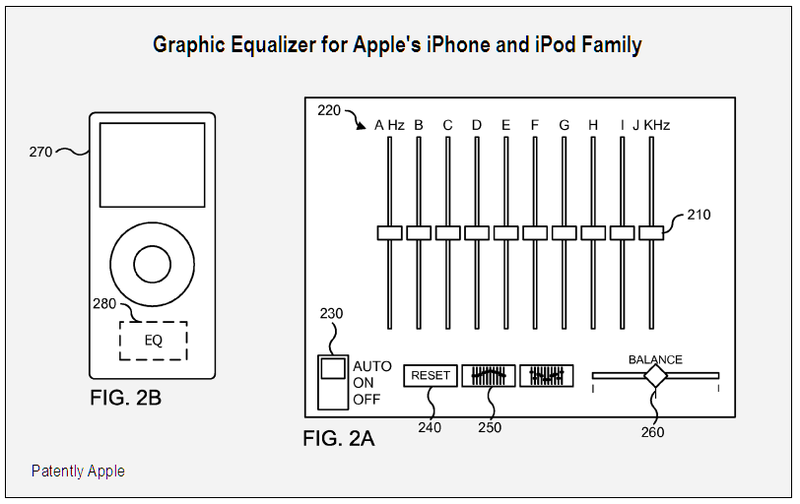 On Thanksgiving Day 2009, the US Patent & Trademark Office published a patent application from Apple that reveals one of the next chapters for Apple's iPhone and iPod family.  Apple's patent reveals that a more robust graphic equalizer will be added to their media players sometime in the future. Beyond today's basic Equalizer (EQ) settings that are found on various iPods, Apple plans to implement a more sophisticated virtual touch-based Graphic Equalizer interface for the iPhone and other iPods - especially the iPod touch. This will provide music enthusiasts with much greater control in fine tuning their favorite music. There's even a hint, however small, that a Graphic Equalizer could be designed to illuminate on other accessories like a mouse or notebook touchpad which, in my opinion, would be very, very cool.

In various embodiments, volume controls are represented (e.g., physically as an accessory attached to media player or as displayed using a graphical user interface) as slide potentiometers that may be adjusted by moving a control button up or down. Volume within a given frequency band or channel may be increased by sliding the control button associated with the given frequency band upwards. In some examples, the slide potentiometers for each frequency band or channel may be placed side-by-side, with the lowest-frequency unit (e.g., band A) at the left and the highest-frequency unit at the right (e.g., band J). In these examples, the positions of the buttons may appear to follow a graphical curve that represents the gain as a function of frequency for each channel.

This is a great idea. That way people will decide for themselves and adjust volume controls to suit their preferences (or their children's). The idea that it can extend to other portable devices is also intriguing. Perhaps, we can see it added to the "tablet" you mentioned in a previous report?

An idea whose time is long overdue.