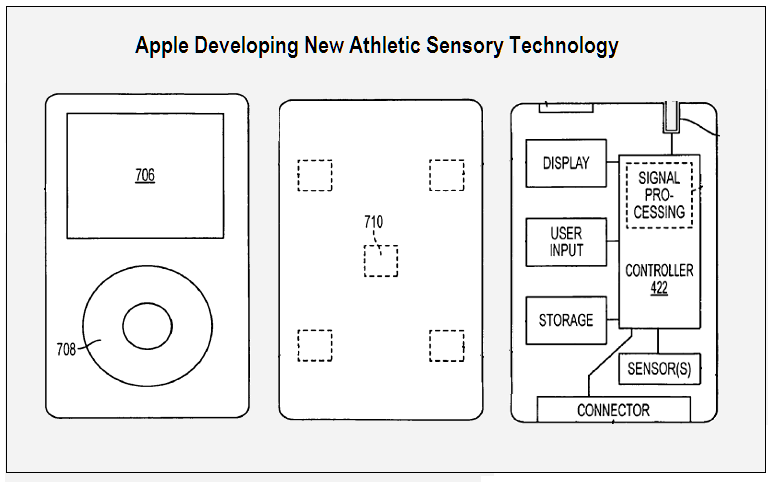 Within a year it's been for Apple patents regarding Athletic Sensory Technology! In March we read about advanced sensors relating to ski and biking equipment. In April we read about sensors in cyclist's helmets with GPS and head-gesturing. In June we were blown away with news about advanced Sports-TV technologies covering kick boxing, wrestling, NASCAR racing and more and in September Apple rocked the gym with new sensory technology for treadmills and other gym equipment. Today's newly published patent is no less exciting with new sensory devices being devised by Apple. The two main devices include a new headset/earplug system and an arm or belt band all of which incorporate advanced sensors that monitor your heart and oxygen levels without the need of using a traditional chest strap-on system. Apple's patent also covers a new pedometer which of course was incorporated into their latest video iPod nano. So the technology is slowing crawling to market and perhaps we'll see more exciting components described in this year's patents come to life in 2010.

During the workout, the user may want to monitor his performance metrics, e.g., the distance the user has covered during a jog and/or the user's heart rate. Conventionally, this can require the user to attach additional electronic devices to his body or clothing. For example, to monitor the distance a user has jogged, the user may clip a pedometer to his clothing. To obtain information about the user's heart rate, the user may strap a heart rate sensor to his chest and a receiver for receiving data from the heart rate sensor to his wrist. Disadvantageously, the user can become very uncomfortable during his fitness routine due to the number of devices the user has attached to his body and clothing.

Today's patent from Apple covers new ways of incorporating more advanced sensors into their media player ecosystem of devices and accessories to assist an athlete's special health concerns while providing comfort, convenience and motivation through iTunes. 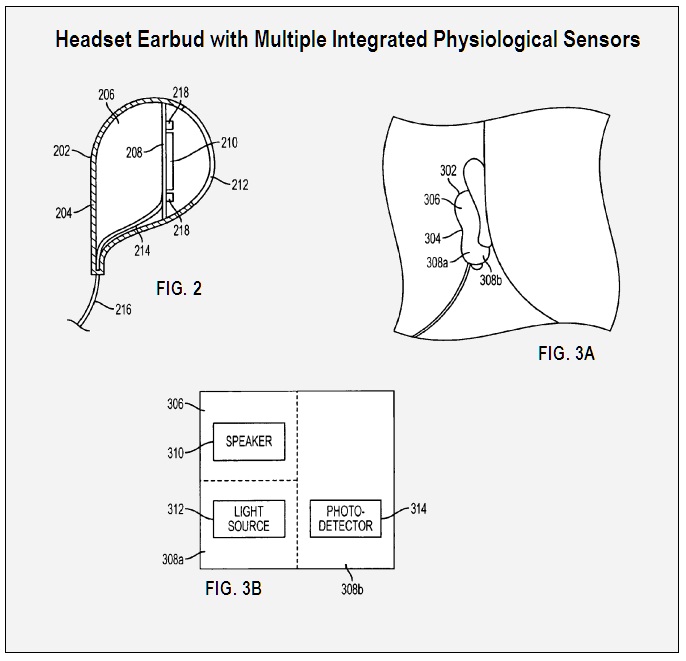 Apple's noted Earbud (202) could be incorporated into a wired or wireless headset that receives and/or transmits audio signals. For example, if the electronic device with which the headset communicates is a telephone, the headset also can be equipped with a microphone.

Shown below is an alternative headset/earbud design which could incorporate all manner of sensors including heart rate, reflectance pulse oximeter and so forth. This design can also have one or more antennas (421) for wirelessly communicating with a data network and/or with one or more accessories (e.g., any of the headsets described herein). For example, the electronic device can include one or more antennas for communication with Bluetooth-enabled devices, WiFi network, cellular network, radio network, or any combination thereof. In one embodiment of the present invention, antenna(s) 421 can permit a user to stream or otherwise download audio and/or visual media to entertain and motivate the user during performance of an activity. 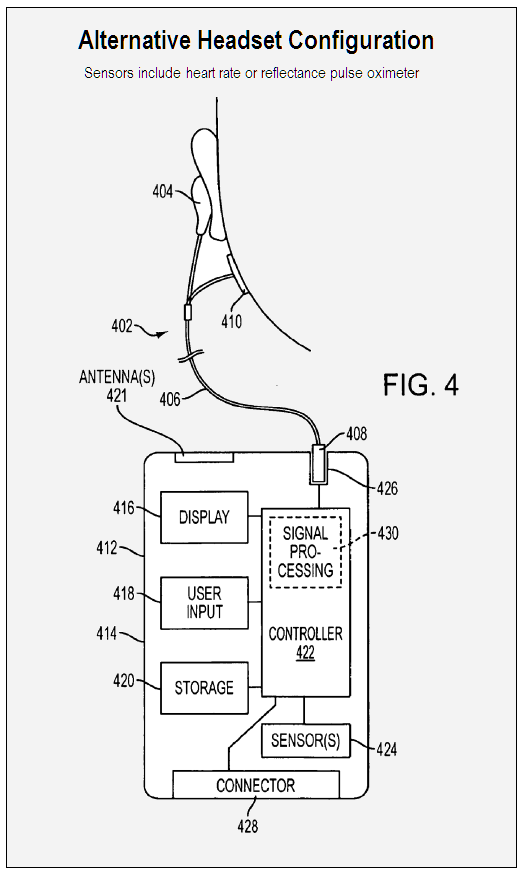 Apple's patent FIG. 5 below illustrates a specialized adapter accessory for providing hard-wired communication between a headset and an electronic device. 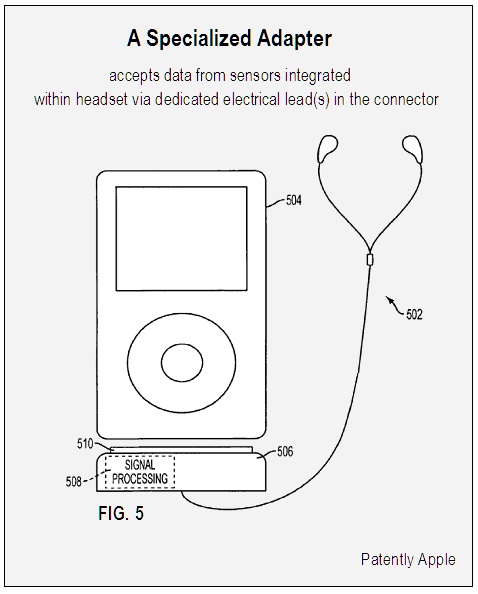 Apple's patent FIGS. 6A and 6B below illustrate a specialized armband having one or more integrated physiological sensors in accordance with one embodiment of the present invention. 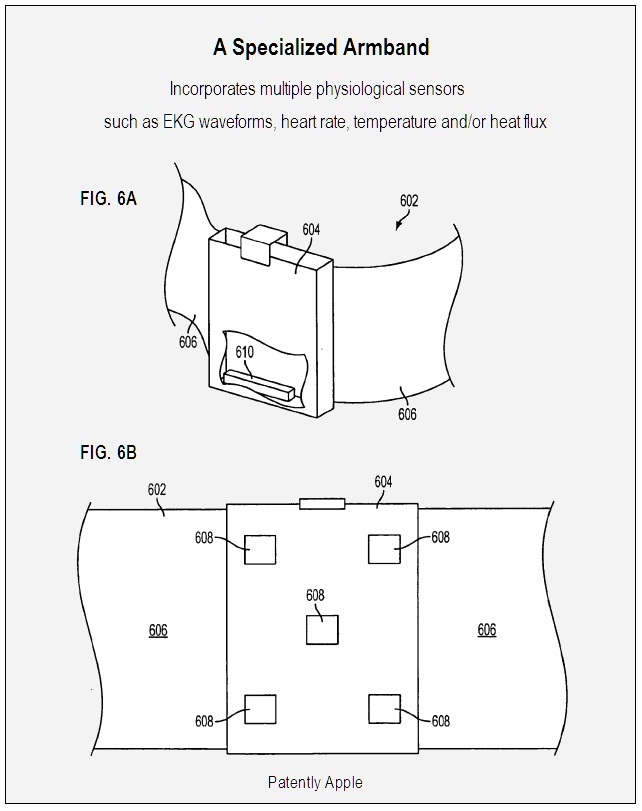 Specialized Sensors Built within the Back Cover of the iPod 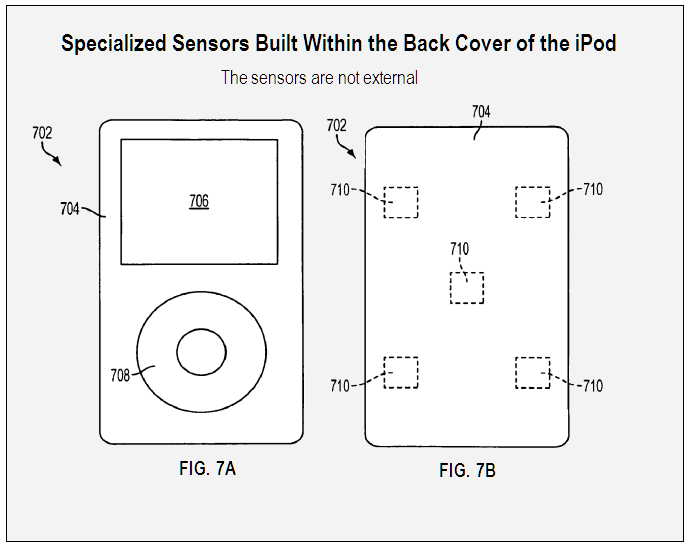 The present invention can include systems and methods for integrating sensors for tracking a user's performance metrics into media devices and accessories thereby reducing or eliminating the need for additional independent monitoring devices. Advantageously, such integration of sensors can be desirable because it requires no additional effort by the user to use them. As used herein, performance metrics can include physiological metrics (e.g., heart rate, EKG, blood oxygen content, temperature, heat flux, etc.) and non-physiological indications of performance (e.g., distance covered, pace, etc.).