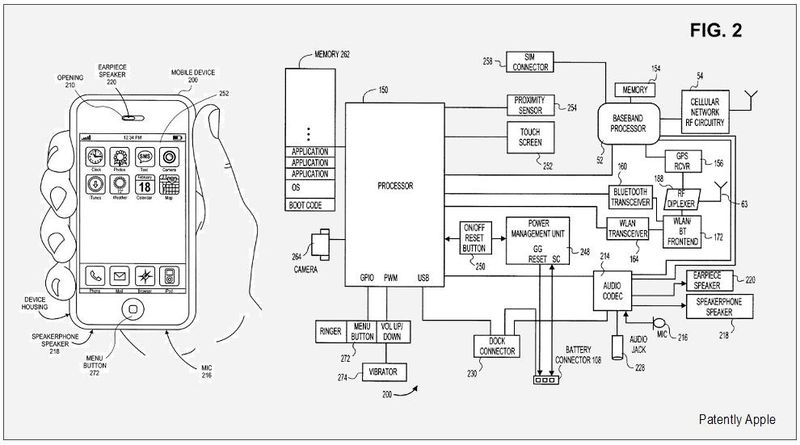 On October 8, 2009, the US Patent & Trademark Office published four iPhone centric patent applications. The applications cover such matters as how the iPhone is certified for use with their carriers like AT&T, how the iPhone controls the execution of software code using cryptography methodologies and finally an application which covers the iPhone's built-in processor for enhancing audio.  The patent figure noted above relates to network certification (click to enlarge).

Apple's patent generally relates to the iPhone having a built-in processor for enhancing an audio signal. 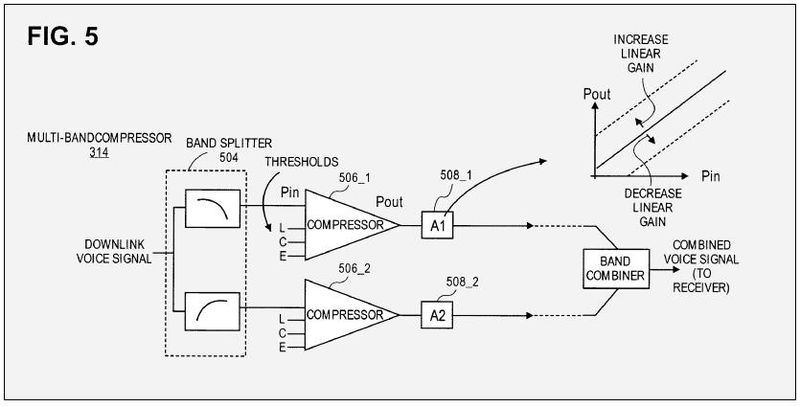 The iPhone's Filter Adaption Based on Volume Setting for Certification Enhancement

Most handheld wireless communications devices are typically certified for use with a given cellular communications network. This may be in accordance with a specification that is governed by an approved authority such as the PCS Type Certification Review Board (PTCRB). The certification process entails the laboratory testing of a manufactured specimen of the device, to determine its compliance with the specification. For example, the audio portion of the specification for Global System for Mobile communications, GSM, devices requires that an artificial speech signal (or "cert signal") be sent over the air during a wireless call with the device. For the downlink portion of the test, the cert signal is received over the air by the device. The sound pressure level and spectrum of this cert signal as output by the device's receiver (earpiece speaker) is then measured, at a given volume or loudness setting of the device. For the uplink portion of the test, the cert signal is transmitted by the device over the air to a receiving test station where it is converted into sound. In order for the device to pass the certification test, the measured sound output (which is a function of frequency) needs to fall within a certain spectral and sound pressure level range (also referred to as a "mask") that is defined in the specification, for the duration of the signal (e.g., about twenty seconds). 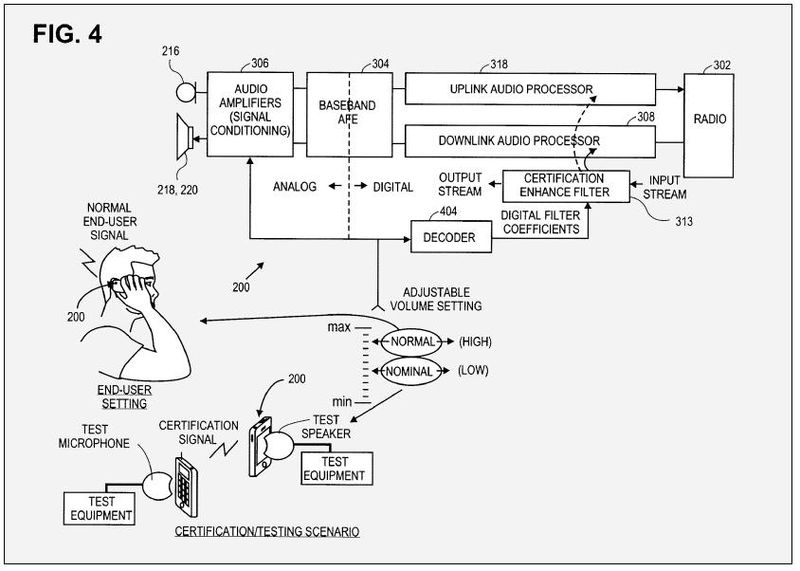 In Apple's patent FIG. 4, the cert enhance filter 313 is configured so that its frequency response (ratio of its output bitstream to its input bitstream), when the device 200 is operating as a cellular or wireless communications handset in the midst of a telephone call, causes the resulting shape of the measured sound output of the receiver of the device 200 to an artificial voice signal, at a "nominal" volume setting, to be in compliance with the certification protocol's spectral mask. The nominal volume setting is one that results in a required, received loudness reading, RLR, (in dB) at the speaker output, for the specified artificial voice signal. As an example, the nominal RLR may be 2 dB. In other words, when the volume setting of the device 10 is set to a nominal level, which might be about the midpoint of the full range available for example, and an artificial voice signal is being played by the device 200 through its receiver (pursuant to e.g., ITU-T Recommendation P.50), the sound output at the receiver of the device falls within or meets the GSM mask over the entire required frequency range.

As seen in FIG. 4, the "nominal" volume setting is one that yields the required RLR (specified in a cellular/wireless handset certification test protocol)--it is deemed low relative to the "normal" setting. In many instances, the nominal setting may be about half way in the full range of volume, but in other instances may be a little higher or lower depending on the characteristics of the receiver and the RLR required by the certification test.

In another related patent, we see a secondary FIG. 4 below which deals with a variable or adjustable delay noise suppressor. 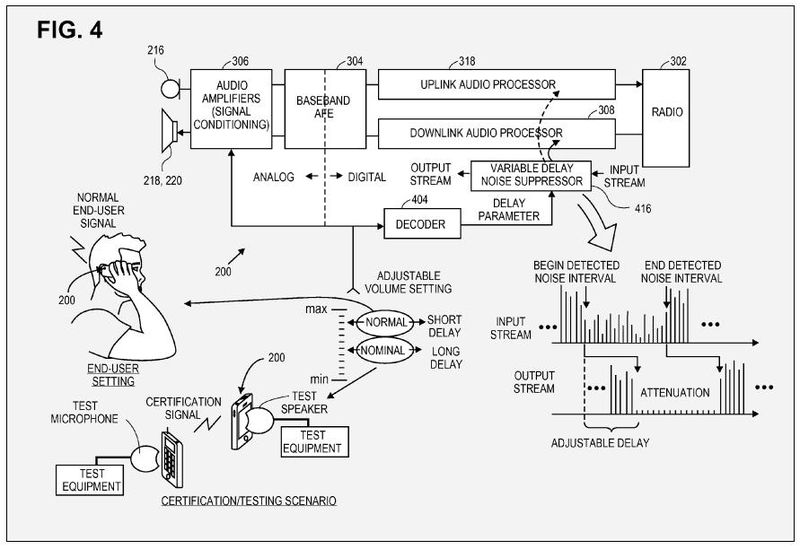 Apple's patent generally relates to the iPhone's method and system of controlling execution of software code.

Computing devices may be configured to require that code executed on the computer system be authorized by a trusted party. For example, such authorization may be used to help ensure that the integrity of the computing device is not compromised by malicious or unauthorized code. In some cases, computing devices may be configured to require that code be digitally signed by the trusted party and verified in order to be executed on the computing device and/or to control execution of software that accesses particular resources or services of the device. Verification of the digital signature helps to ensure that the underlying application code has not been modified since it was digitally signed by the trusted authority. However, this security scheme can be difficult to extend to multiple parties that wish to access or modify applications running on the device. 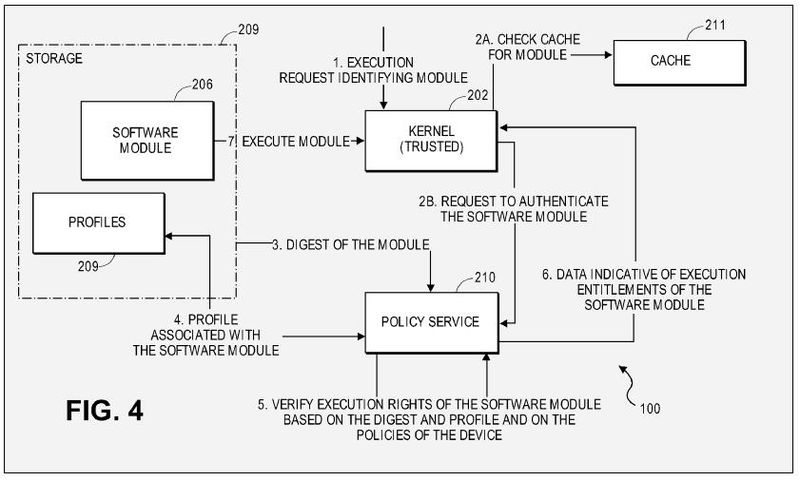 Apple's patent FIG. 4 is a block diagram illustrating relationships between events that occur when a request may be received and processed by the system between software components of an iPhone. 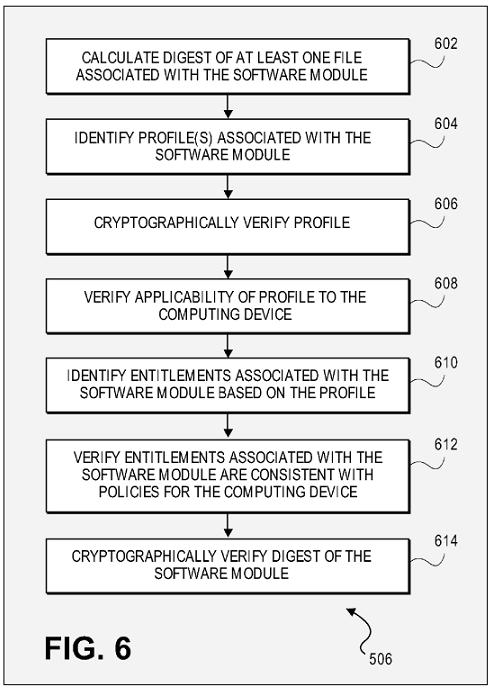