Shifting the Display and/or Input Regions to Compensate for Motion

Input from the motion sensing device may be used to adjust the display 16 and produce motion compensated screens or modified screens with scaled images.

In Apple's patent FIG. 3 noted above, we see that device 10 has a motion compensated screen (50).  The motion compensated screen facilitates viewing of the display (16) while the device is moving. As illustrated, the device has been moved to the right, as generally indicated by arrows 51, from its original position 52 to a new position 53. This change in position may be caused by a user or by environmental instability. For example, a user's hands may shake when holding the device, causing it to shift. In another example, environmental vibrations, such as those experienced in a car, subway, or industrial setting, may cause the device to shift. As will be appreciated, although the device has been moved to the right in FIG. 3, the present technique may be applied to any combination of device movements in a variety of directions.

For example, images 20, such as the telephone and television, are positioned partially off the left side of the screen, while other images 20, such as the envelope and clock, are positioned near the center of the screen. In other words, the position of these images 20 has stayed the same, while the device has moved around them. Additionally, new images 54 have begun to appear on the edge of the screen 50. In some embodiments, these new images 54 may be originally present on the screen 50 but not shown on the display 16 because they are located outside the display borders. 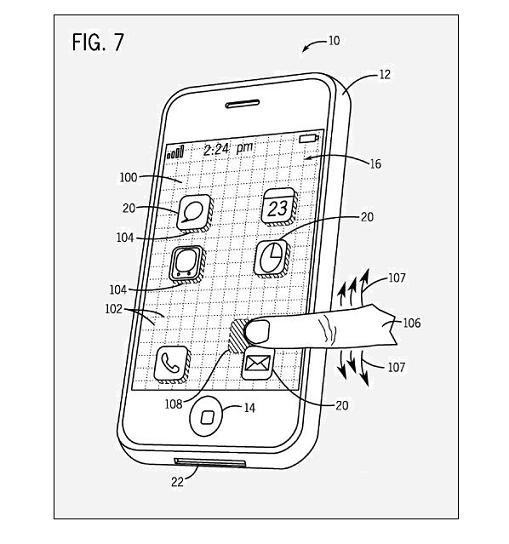 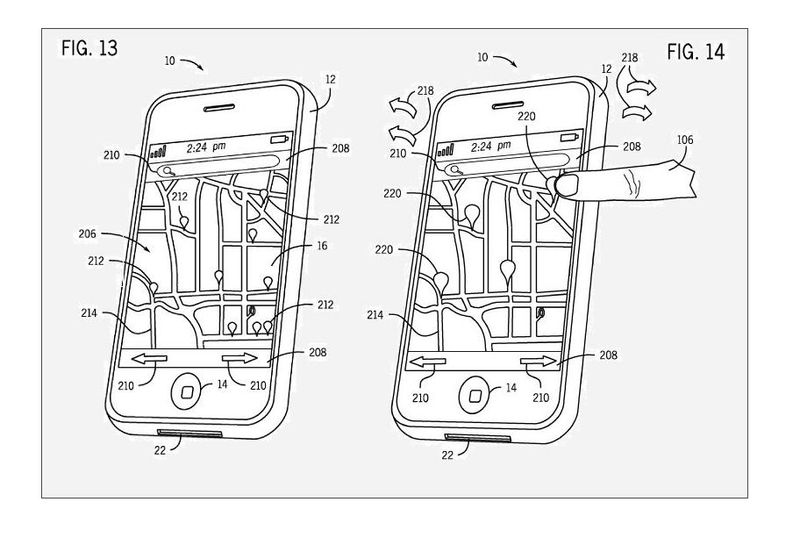 Apple's patent FIG. 14 depicts the device of FIG. 13 with an apportioned display. As illustrated, the device is moving in a side-to-side motion as indicated generally by arrows 218. This motion may be caused by a user or by environmental instability. In response to the motion, the apportioned display contains scaled images 220. These scaled images are larger versions of the selectable images 212 shown in FIG. 13.

Apple credits Michael and Mason Lee as the inventors of patent application 20090201246.