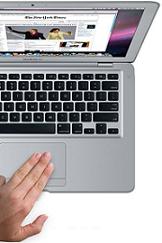 Apple first introduced an enlarged Multi-Touch touchpad with their new MacBook Air in January 2008. The new trackpad allowed users to pinch, swipe, or rotate to adjust an image, zoom in on text, or advance through a photo album. It also introduced a four-finger swipe, swiping up or down to use Exposé; left or right to switch among active applications. 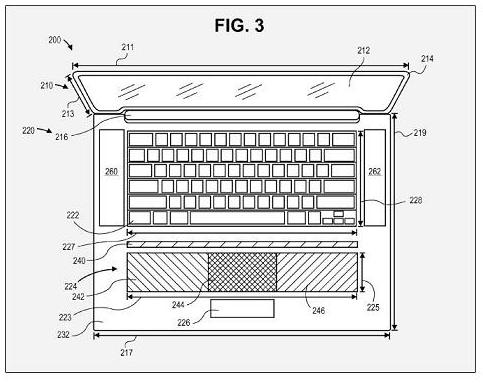 This particular technology, which was first introduced in this granted patent, has since moved across Apple's MacBook Pro line-up.

The larger trackpad, as is understood within the context of Apple's current wide trackpad implementations could be seen in Apple's Multi-Touch Trackpad video here – or in the overview collage below. Apple's next iteration of OS X, called Snow Leopard, will also advance the multi-touch trackpad to enable users to draw in Chinese characters into documents. Thus the wider trackpad was needed to support advanced gesturing. 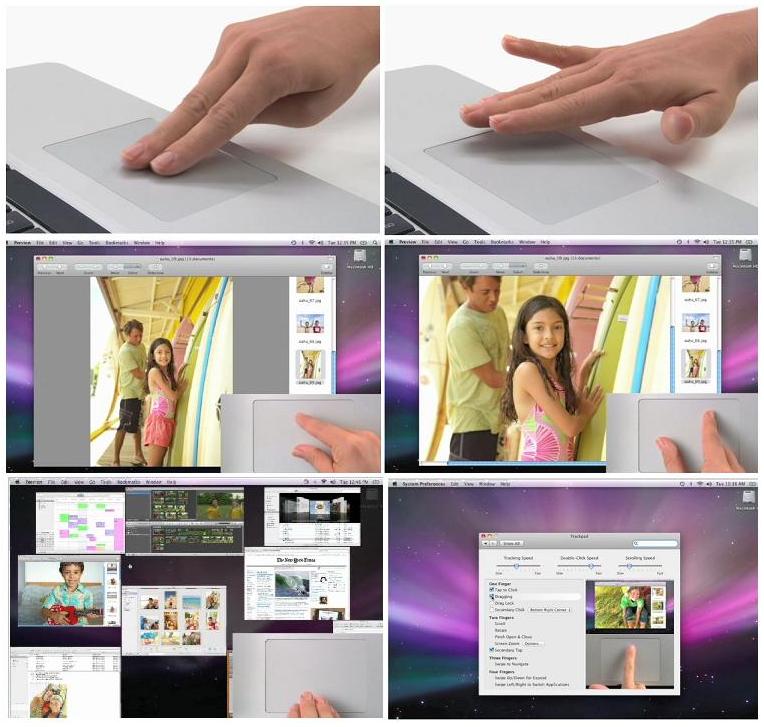 It's all about the Sensors

At the heart of this patent we see that Apple is using advanced sensors to control the trackpad so that it can ascertain whether the user is typing or using the trackpad.  Apple lists several key specific sensors which include imaging, Infrared & optical emitter-detector sensors. 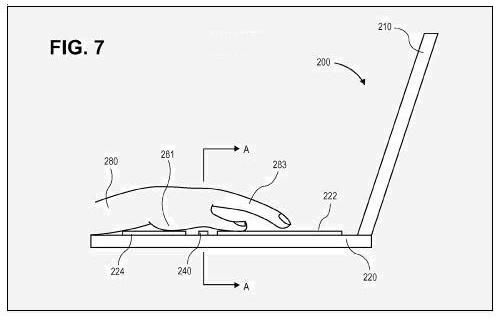 In Apple's patent figure 7 noted above, one of the chosen sensors is shown to be strategically placed between the palm rest area and the keyboard. If the hand is being used to type, then the sensor will detect the extension of the hand on the keyboard and will not activate that portion of the trackpad. 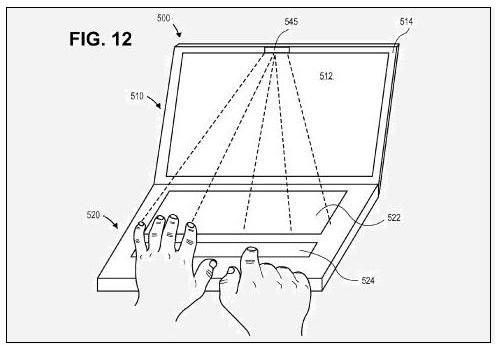 Alternatively in figure 12, an imaging sensor technique is used to track hand movements to determine if the user is typing or using the trackpad. The sensor is noted as patent point 545 where Apple's iSight camera is currently located. The sensor is likely integrated into the camera.

Apple's patent FIG. 8 shown below illustrates a cross-sectional view of FIG. 7 noted above. In this embodiment, we see three sensors noted as 240, 275 and 276. The latter two sensors are noted as being infrared sensors that look upwards (designated by the dash lines). These sensors detect if the hand is used for typing or not and activates or deactivates the touchpad for use accordingly. 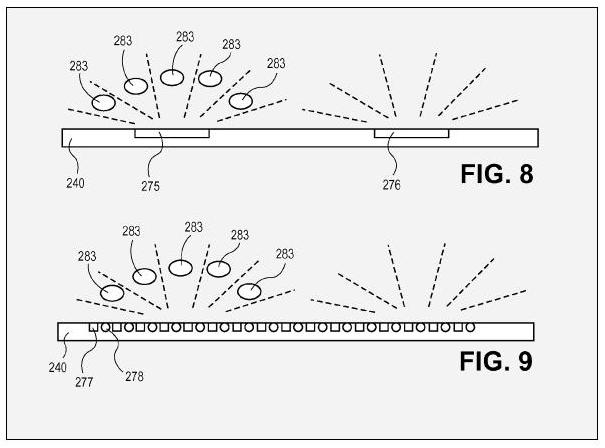 In patent FIG. 9 above, Apple illustrates an alternative embodiment of a sensor mechanism for sensor 240. Multiple optical emitter-detector pairs (e.g., pairs 277, 278) are disposed along the sensor strip area to detect the presence or absence of a users hand in the sensed plane.

Apple's patent FIGS. 4-6 illustrate three of many possible scenarios (i.e., hand positions) of user activity with portable computer 200 and the recognition by the three regions of touchpad 224 that may either accept or reject contact. FIG. 4 illustrates a typical typing position by a user in which the fingers of left hand 280 and right hand 282 extend over keyboard 222 and both palms rest on regions of touchpad. In particular, left hand 280 rests entirely on left region 242, and right hand 282 rests on right region 246. Sensor 240 detects the extension of the fingers from left hand 280 and associates the fingers with the contact made on left region. Similarly, sensor 240 associates the fingers from right hand 282 with the contact made on right region. Accordingly, the contact patches on left region and right region are not recognized as any form of input or touchpad operation. The user's hands may rest comfortably on these regions of the touchpad, and in doing so, left region and right regions serve as palm rests. In contrast, center region 244 of the touchpad may be active and be responsive to touchpad sensing. 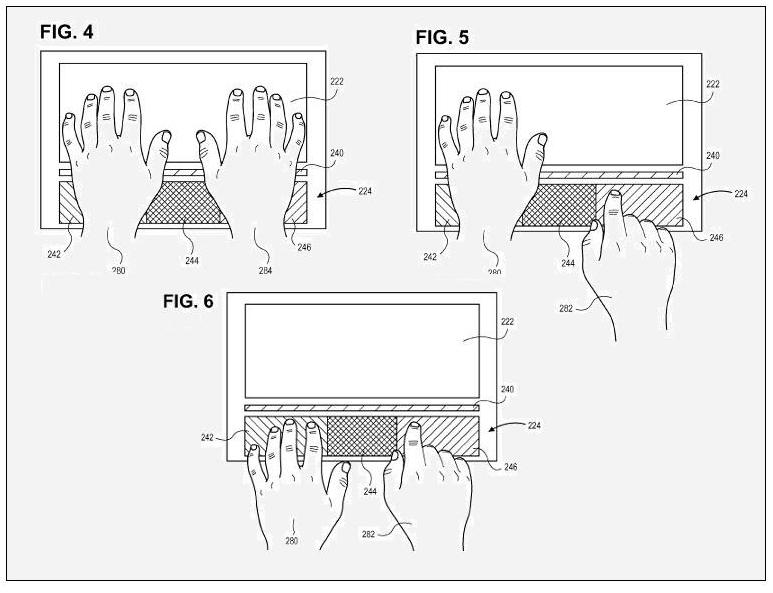 Can we expect more from this Patent?

At present, Apple has chosen to limit the use of a wide multi-touch trackpad to the applications noted above. Yet the potential of taking this technology to the next level is ever present. Over the last 12-18 months, Apple has begun to include "gaming console" in many of their patent product potentials. The use of this category is wide, being that they themselves consider the iPod touch and iPhone to be that of a gaming console. That's contrary to the traditional view of a console such as a PS3, Xbox or Wii.

There's also been all kind of news on Apple gaming, from Metal Gear Solid coming to the iPhone/iPod touch, to John Carmack wanting to advise Apple on advancing their gaming platform while introducing id Software's game called Doom Resurrection for the iPhone. Apple has been working with the Khronos Group for years in respect to OpenGL and OpenGL ES for gaming. And more recently the Khronos Group has been active and strategic in Advancing OpenCL, Apple's latest technology coming to OS X Snow Leopard. Gaming companies such as Activision Blizzard and Electronic Arts are on board to use this technology and so future Apple notebooks using OpenCL will definitely be primed for gaming.  Hence, using the wider multi-touch trackpad as a potential gaming pad isn't that much of a stretch in this context.

For now, it's a very important patent for Apple to have been granted being that it supports the MacBook Air and MacBook Pro implementations. However, the best, in my opinion, is yet to come.