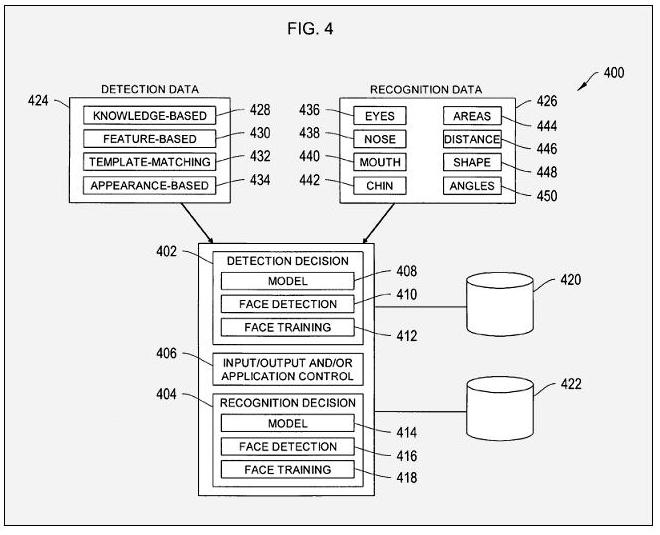 Apple's patent FIG. 5 is a diagram of a face feature vector 500 including various facial features associated with a user or class of users according to an illustrative embodiment of the invention. The face feature vector 500 may include one or more elements such as, without limitation, eyes data 502, nose data 504, mouth data 506, chin data 508, face shape data 510, face areas data 512, face feature distance/angle/relation data 514, and/or skin color data 516. ﻿

Alternatively, if an incoming email is received by the iPhone, it may perform a face recognition step to identify the user. If the face of the user is recognized and/or authenticated, then the user is alerted about the email and the email may be made available to the user for viewing. If the face of the user is not recognized and/or authenticated, the iPhone may not initiate an email alert, and may hide, suppress, and/or block the content of the email from the unauthorized user.

Notice: Patently Apple presents only a brief summary of patents with associated graphic(s) for journalistic news purposes as each such patent application and/or grant is revealed by the U.S. Patent & Trade Office. Readers are cautioned that the full text of any patent application and/or grant should be read in its entirety for further details. Feed patent number xx into this search engine for further details.