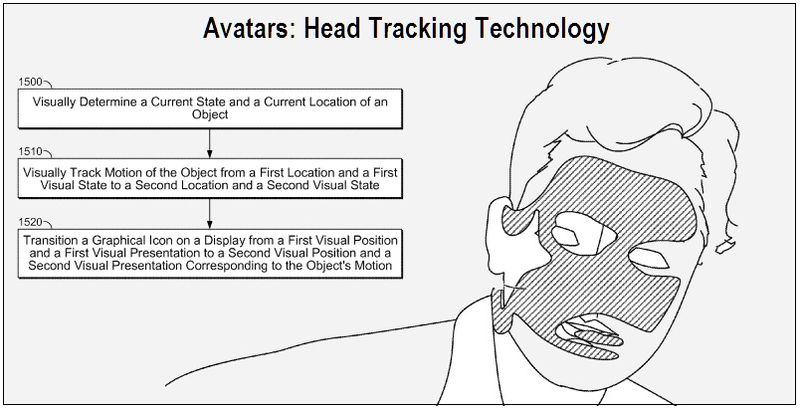 Fourteen months ago I wrote a very popular report called "Will Apple Open a Store in Second Life?" which was based on Apple's patent application titled "Enhancing Online Shopping Atmosphere." In it I presented evidence of Apple's first look into creating an online retail-social environment for avatars. Today, we see Apple wildly advancing their technology on this front in respect to direct human-to-avatar expressions. When your head will turn right to left, so will your avatars in realtime. The technology takes advantage of Apple's built-in iSight camera through a process described in the patent in which the camera sets your face up as a profile that replaces the mouse. As an avatar, your three-dimensional head is tracked by the video camera using motion vectors, which gives you the ability to move in six degrees of freedom, including up, down, left, right, backward, forward and free rotation etc. The avatar representation can be broadly applied in computer technology, whether in the form of a three-dimensional model used in computer games, a two-dimensional icon (picture) used on Internet forums or chatting websites.

Apple's patent FIG. 1 is a screenshot showing a visual tracking of an object, namely, a head 102 of a user 108 by a video camera (e.g. Apple Inc.'s iSight).   An image of the user's head 102 is captured by iSight and displayed on the top right corner 104 of a computer display. The image area 104 conveys a message to the user about which region of his head 102 is to be tracked by the video camera.

In some implementations, the object to be tracked is not necessarily a human head. Any tangible objects can be tracked, such as a pen, a box, a hand, etc. – which is partly shown below in FIG. 2.

In some implementations, the multiple displays are connected by networks. Two or more users can, on their respective displays, observe and control focus of a single desktop, or that of a presentation of a shared digital file. By way of illustration, when two or more users chat online and discuss a file presented on their respective displays, each of them can transition focus of the presentation of the file by moving his or her head.

In the same way that you could move your head as an avatar in an online environment, the enterprise worker could replace the cursor to being that of a pen or stylus to point at documents during a 3D desktop video conference. The worker could point to various points of a document or specimen as if he were in this shared workspace environment. Imagine the simplicity of the cursor being a representation of your hand. It would be freaky, but natural. Imagine the hand flipping through documents in Cover Flow and pulling out the file the worker wants to present to a colleague. The most important aspect of this invention is that it will work on OS X and a Microsoft OS - whatever variant is available that this technology comes to market. It's not a Mac only tool and this is what will make this one hot app!

The patent goes on to state that example system objects in the workplace will include data files, applications, functions, windows, etc. In some implementations, the one or more windows (or applications user interfaces) shown on a display include an editor or a browser. A user can scroll a digital file presented by the editor or the browser in different directions such as up, down, left, and right simply by moving his head or the other object. For example, say there is a five-page file presented by a word processor on a display, and only the first page is shown within the workspace of the word processor. If the user would like to see the last page of the file, he could simply move his head down to scroll the digital file down to the last page. Optionally, he could flip the digital file page-by-page by slightly moving his head down over a relatively short distance.

One of the primary objectives of this patent is to allow a user to be hands free while navigating a user interface or interacting with an application on a computer system. The implications of this for the handicapped are immeasurable and will only add to Apple's work in this important area.

At the end of the day, it would appear with this second patent on avatar creation and development that Apple is taking this project very seriously. In typical Apple fashion, they're applying incredible science to this project and have several consecutive real-world applications on the go that will service many important areas of the market. It will assist the handicapped, the enterprise worker and the consumer. We'll see rich 3D interactive videoconferences and/or work sessions and experience next generation games and social networking applications. Apple's previous patent demonstrated that they desire to bring a virtual Apple Store to the masses which would be a great tool to strengthen MobileMe.

All in all this is a great peek into Apple's war room where next generation applications and devices are being developed for our continuing enjoyment. The only fly in the ointment is that the credited engineer behind this patent is Kevin Quennesson - The very same Kevin Quennesson that has recently left Apple for Cooliris. Let's hope that Apple's work ongoing work on avatars doesn't virtually disappear.

NOTICE: Patently Apple presents only a brief summary of patents with associated graphic(s) for journalistic news purposes as each such patent application and/or grant is revealed by the U.S. Patent & Trade Office. Readers are cautioned that the full text of any patent application and/or grant should be read in its entirety for further details. Feed patent number 20090153474 into this search engine for further details.  Click on the illustrations to enlarge them.