The US Patent and Trademark Office officially published a series of four newly granted patents for Apple Inc. yesterday and one of them was covered earlier this morning in our other report titled Apple Granted Patents for Smartbook & Find My iPhone Related Technologies. In fact, this is simply the second segment of that patent originally titled "Personal items network, and associated methods."  In this focused report, we explore Apple's continuing march into sports monitoring devices and systems which we first covered in our March report. The difference in this report is that we see that the patent calls for a TV system to advance the concepts of movement and event monitoring systems in a very entertaining way. Lord knows that Apple TV needs a killer app of its very own to catapult this hobby device into being a contender for this all important in-home market segment. The patent also reveals an advanced heart rate monitor system and in many ways, Apple may be considering a Nike+iPod-like equivalent program for skiers, snowboarders and related sports.

One of the key applications of this patent is that of a heart rate monitor strip. The wireless strip worn by the patient could notify medical staff that the patient is going into cardiac arrest. 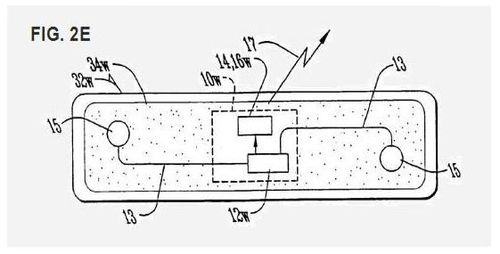 In another embodiment, wireless data 17 is a signal indicative of actual heart rate, e.g., 100 beats per minute, such that monitor 10w may be used in fitness applications. Monitor 10w thus provides an alternative to "strap" heart rate monitors [such as a Polar] to monitor the heart in real time. Data 17 may be captured by a receiver such as a watch to display the data to the wearing user. The device could also be used for various other scenarios within a hospital environment such as monitoring a patient's activity and to notify the appropriate personnel if a patient has fallen. It could also be set to monitor stress, pulse, respiratory rates etc.

In Apple's patent FIG. 8 shown below, we see two people engaged in karate training.   Pluralities of Movement Monitoring Devices (MMDs) are attached to person "A" and person "B". The data from these monitors are streamed to a remote reconstruction computer and receiver - which is noted below in FIG. 8A.

The Movement Monitoring Device strips are placed on persons A and B at appropriate locations, e.g., on each foot and hand, head, knee, and chest.  In patent FIG. 8C we see a close up of boxer's hand to illustrate that the strips could be placed on the hand under a boxing glove as well. So it's not restricted to just karate. 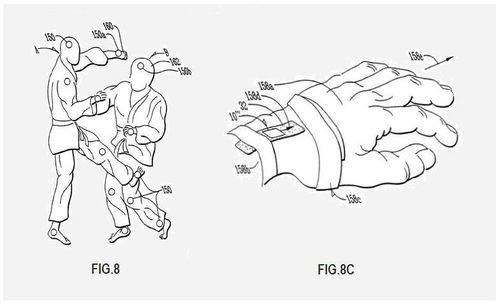 In the case of the boxing gloves, we're told that the Movement Monitoring Device includes an accelerometer oriented with a sensitivity axis aligned with a strike axis of the fist that transmits the strike data to the remote reconstruction computer and receiver through the gloves.

Now this is where it could get very interesting in respect to monitoring sporting data for a future Apple TV application. Watching a fighting match is going to be taken to the next level and be a lot more interesting and engaging for the viewer.  Accordingly the patent notes that data plots 154 and 156 (noted in context with FIG. 8A below) have further advantages for broadcast media in that data could be simultaneously relayed to the Internet or television (patent point 170) to display impact speed and intensity of blows given or received by persons A or B in real time, to enhance the pleasure and understanding of the viewing audience (i.e., viewers of television, and users of the Internet). 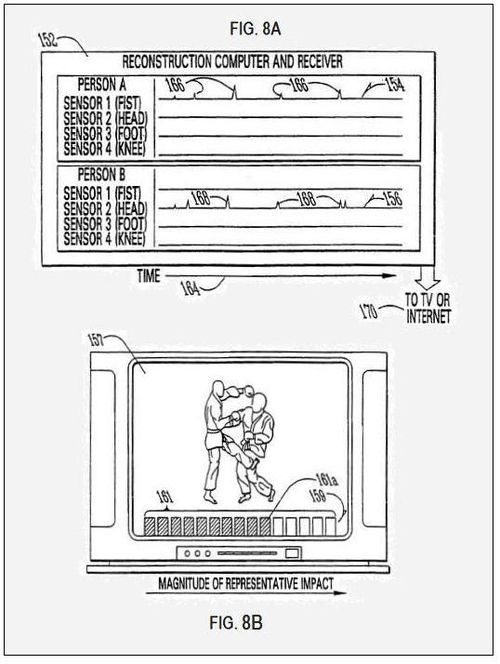 The fighter fan will be able to analyze such things as impacts per minute; average strike force per boxer; average punch power received to the head; average body blow power; and peak striking impact. Rotational information may also be derived with the appropriate detector, including typical wrist rotation at impact, a movement metric that may be determined with a spin sensor. The patent states that data 159 would be displayed in an easy to understand format, such as through bar graphs or other means. On this front however, I'm sure that Apple will amaze us with a sporting event monitoring user interface to boggle our minds.

The interesting part of this segment of the patent is that it's just one sporting event example. You'll have to use your imagination a bit here to realize that the monitoring systems detailed in this patent will apply to a plethora of sporting events well beyond fighting based contact sports. Think of football, downhill ski racing, extreme snowboarding, extreme dirt bike racing, baseball, soccer, hockey, wrestling, sports car racing, surfing contests and rodeo events like those at the annual Calgary Stampede – the greatest outdoor show on earth. I know this technology will extend to skiing and snowboarding as I noted in our opening summary that we covered this subject in March.

In 2006 NASCAR signed a video deal with Apple and in this patent we see that Apple could use this technology on both Apple TV and the iPhone. Apple's patent describes the details of System 600 which is an application that includes an array of data capture devices 602 coupled to racecars to provide vehicle movement metrics. 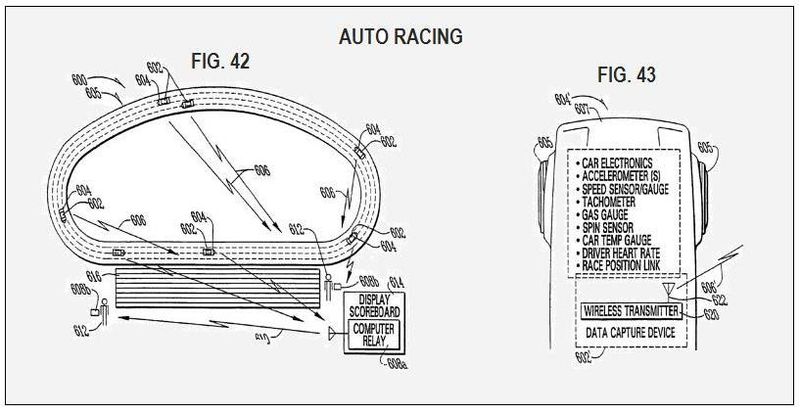 In addition, the monitoring devices could also provide information to fans about any car's speedometer, accelerometer, tachometer and/or gas gauges and could add spin sensors, temperature gauge, and driver heart rate sensors. An on-board computer can further provide position information about car 604' position within the current race (e.g., 4.sup.th out of fifteen racecars). The system may also transmit data on events as they occur such as a car crashes, rollover or total rotations. The system may be available to customers as part of a certain event ticket package or available for a fee. If you accept it, then the race track information would be transmitted to your cell phone accordingly.

Apple's technology will finally provide Ski Resort owners with a means to keep their ski trails safer in the future by being able to implement next generation Ski Lift Passes that will come with a built-in receiver and a multitude of advanced sensors including GPS. The monitors will allow resort owners to actually set ski hill speed zones that could be monitored for violators. 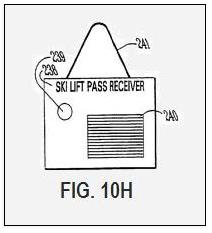 Ski Passes for specific runs will set speed limits of 35, 40 and higher mph and offenders could lose resort privileges, be fined or even removed from the premises for reckless behavior. The sensors will also be able to monitor if you've exceeded your jump limit and/or performed too many overhead flips. Some skiers may not approve of such restrictions, but for safety sake, it’s the best tool ever devised to assist ski resort patrollers. I think that this could eventually save lives over time – and you can't beat that.  On the positive flip side, the advanced ski lift passes will also be able to provide skiers with a Nike+iPod-like program for monitoring all manner of skill levels that you wish to challenge yourself with be it speed to a given time or an airtime value in jumps and so forth. I really enjoy the Nike+iPod program and could only imagine the fun it'll bring to skiers.

Other Events Covered by the Patent 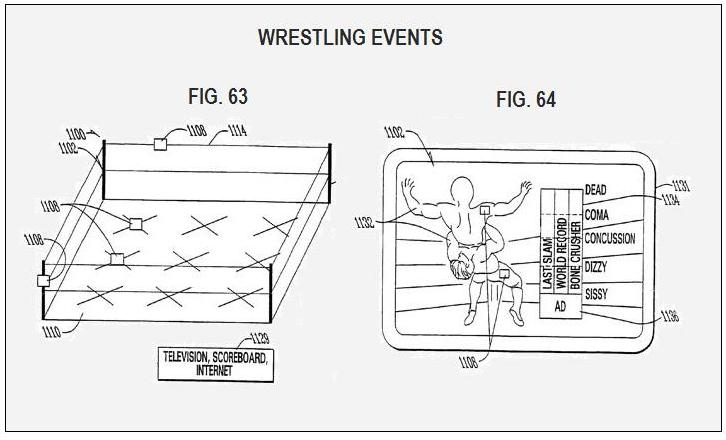 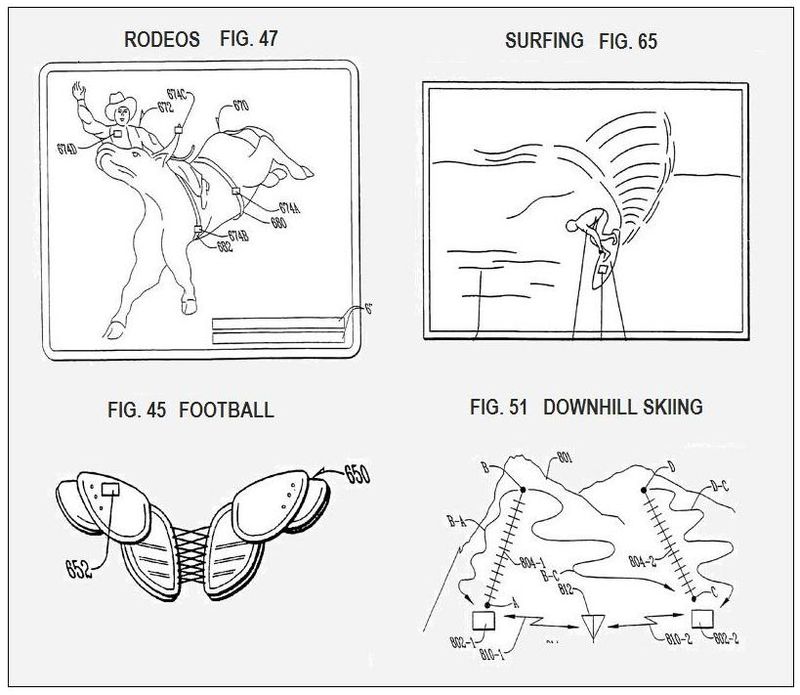 NOTICE: Patently Apple presents only a brief summary of patents with associated graphic(s) for journalistic news purposes as each such patent application and/or Issued Patent is revealed by the U.S. Patent & Trade Office. Readers are cautioned that the full text of any patent application and/or Issued Patent should be read in its entirety for further details.