IDF Shanghai 2008: The Era of Visual Computing Draws Nigh

One of the first core keynotes delivered at IDF Shanghai 2008 was titled "From Peta FLOPs to Milli Watts."  Intel's Patrick Gelsinger, Senior Vice President Co-General Manager, Digital Enterprise Group covered a rather interesting range of material that was focused on high performance visual computing. This report will primarily focus on both the beginning and end of this keynote which held the most interest for the consumer segment. Visual computing was, at the end of the day, the vision that was most captivating.  And although the details of the Larrabee Project were scant, you couldn't escape Gelsinger's enthusiasm for this project. In fact he stated that he had never been involved with a new program that garnered more enthusiasm from ISV's than the Larrabee Project. If that enthusiasm is as powerful as Gelsinger suggests, then we may very well be on the verge of new paradigm shift in video gaming development that could advance PC video gaming environments to breathe taking new heights within the next couple of years when Sandy Bridge based desktop computers begin to roll out.

The Architecture for Life

The keynote kicked-off with a new marketing video that stated the following: "From milliwatts of energy consumption … To PetaFLOPS of processor performance … One Architecture is ready to leap ahead.  Imagine what will be possible. Billions of electrons pulse along nanometer highways on their way to express a human thought. Scale that to billions of devices on earth and there's no limit to what we could do. But can connections between atoms narrow the gap between cultures? Can it digitize smiles that bring joy to someone half way around the world? Can the beat of a billion transistors heal an ailing heart? Can we help save our planet with something so small? Yes we can: By doing more, with less."

"With a single architecture, Intel brings life to the smallest devices and the most powerful computers on earth. So connections can be made. Mysteries revealed. Futures planned. And dreams ignited. For the past forty years, we've focused on the small things, so you could focus on the big things. Intel: The architecture for life." 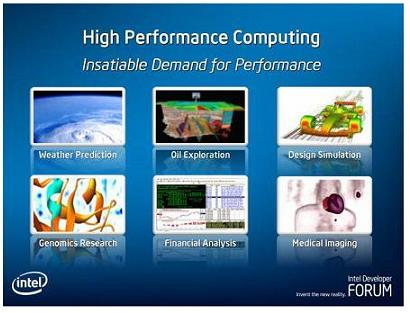 In this segment, Gelsinger delivered Intel's bold promise: "At Intel we have a very simple vision for High Performance Computing: We want to create a world in which all major breakthroughs and discoveries are powered by Intel Powered Super Computers, from exploration to production."

Gelsinger then provided his audience with a few examples of why it was important for Intel to keep pushing High Performance Computing to new frontiers. He covered medical imaging, genomics research and weather prediction in general as follows: Medical Imaging: Analyzing a CT-Scan is one of the most powerful diagnostic tools available today. Currently at 50 Teraflops, it takes up to two hours to analyze a single scan. At a Petaflop, we could do that in real time.  A Petaflop centric computer is due by 2010-2011. Genomics Research: Modeling an entire cell's metabolic and signaling network would take 6 days to model on a Petaflop computer and so we must look to yet another leap to the exaflop based computer to be able to handle such modeling in close to real time. Intel's timeline for the exaflop centric computer is approximately 2018-2020. Weather Prediction: NASA theorizes that a Zettaflop centric computer is required to accomplish full weather modeling, which could cover a two week time span accurately. Such systems won't see the light of day until 2030.

Gelsinger announced that Intel was releasing the specifications for Sandy Bridge's Advanced Vector Extensions that double from 128 bit to 256 bit. One of the advantages of this particular advancement, according to Microsoft's Corporate VP for Unified Communications Group, is that it will enable higher definition video conferencing which I'm sure translates into advancements that Apple will apply to iChat. 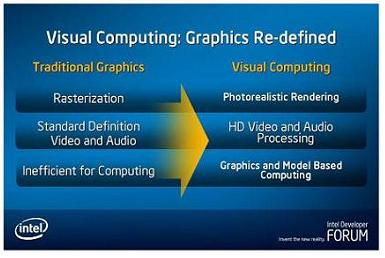 Next up, Intel's Vision for visual computing began with Gelsinger stating that "graphics that we've all come to know and love…I have news for you: It's coming to an end. Our multi-decade old 3D graphics rendering architecture, that's based on a rasterization approach, is no longer scalable or suitable for the demands of the future. And we could do much better. We could do next generation photorealistic rendering architectures. Digital media, right, is well underway that demands high definition from creation to consumption.  And the graphics pipeline is inefficient for the next generation of workloads coming to it. We see that we need to enable a next generation programmable and unified architecture to enable breath taking visual behavioral realism enabling acts that look real, that act real, and finally, feel real: A next generation of visual computing capabilities." 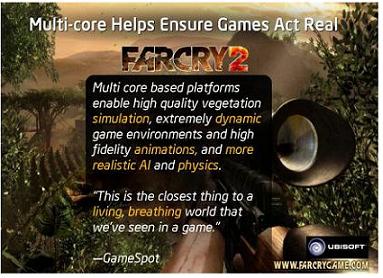 "We believe that requires photorealistic 3D rendering, life-like games, natural lighting, shadows and reflections, high definition audio and video in realtime transcoding and image searching. Also, model based computing e.g. physics for fluid, fire and flood simulation. It's all about acquiring, analyzing, modeling and synthesizing visual workloads of the future.  All of this requires a foundation that's programmable, ubiquitous and unified at the architectural level."

"Let's look at just a few early proof points of this visual computing transition that we see underway. First there's that multi-core architecture helps ensure that the performance capabilities to enable games to act real. And this means things like physics, simulation, high fidelity animation, AI capabilities that's part of the game." Gelsinger demos a brief snippet of the FarCry2 video game and points out that the visuals aren't video but rather advanced animation. 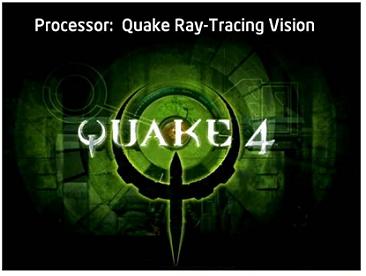 It's also about photo realism in terms of the rendering architecture. Ray-tracing is moving from the academia research to products. In respect and in context with video gaming, Gelsinger stated that " We shocked the world when an Intel researcher showed realtime ray-tracing as part of a Quake environment.   What you see from Quake are scenes that were taken out of a traditional rendering architecture and now done in ray-tracing architecture. This enables the programmer to focus on delivering images capabilities that look real. What it means to the artist, the person working on the content, is he's allowed to be an artist focusing on content creation and no longer focusing on being a computer scientist – to know what the pipeline may or may not be able to do. And to the user, they get visually rich photorealistic rendering capabilities. So that's what we see as the vision for visual computing of the future." 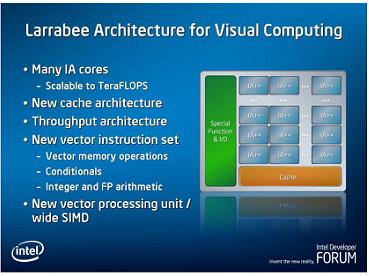 Some of the architecture's details, according to Gelsinger, include the fact that "it's an architecture that's been designed from the ground up with a focused short pipeline that allows us to be very energy efficient. It adds to that core a massive vector (processing) unit that allows us to have on-die teraflops of performance on a single piece of silicon. Over a hundred new instructions that will deliver a vector complete construction set as part of it. It includes arithmetic functions for both Integer as well as for Floating Point, as you'd expect. New vector memory operations: Operations such as Scatter/Gather instructions that allow you to manage a rich sets of sparse data structures - as next generation workloads require. Also we feed this with a next generation cache architecture and a massive amount of on-die cache bandwidth as well as off-die memory bandwidth. An architecture designed to support the combination of programmable-cores and fixed functions."

"In my career, which is almost 30 years long in developing next generation silicon," Gelsinger smiles, " I have never, never…. have I been involved with a new program that's garnered more enthusiasm from ISV's than the Larrabee Project. There's just stunning excitement about what this will enable for the next generation of visual computing."

Intel has been ramping up their involvment with video gaming development in the last several months with their acquisitions of Havok and Project Offset. In February Intel and others announced the introduction of the new PC Gaming Alliance.  So there's excitement in the air – and Gelsinger delivered the news as to what's likely behind it all: Intel's Larrabee Project. Get ready folks, because the era of visual computing draws nigh.