On May 3, the US Patent & Trademark Office published five of Apple's patent applications relating to Dashboard. Out of the five patents, the one titled Multiple Dashboards revealed some interesting twists that no doubt will be seen in OS X Leopard's demo this coming June. One of the most intriguing features of all included an interactive dashboard cube. Apple's obsession with this symbol is once again given prominence. This report covers some of the key features that were noted in that patent and provides you with a number of patent links for your convenience. 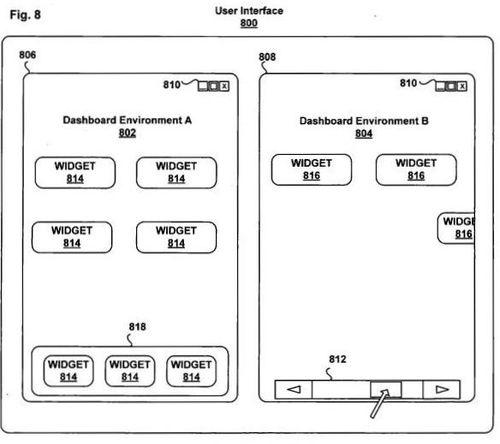 Apple's patent FIG. 8 illustrates a UI displaying multiple dashboard environments. In some implementations, more than one dashboard is available. For example, the user can create and configure one dashboard to contain widgets related to work, and another for widgets related to personal matters. Different trigger events (e.g., different key combinations, menu selection, etc.) can be used for triggering the dashboards. State information for each dashboard can be saved enabling the dashboards to be restored to their previous respective configurations. Different dashboards can contain one or more of the same widgets. State information for a widget can be maintained separately for each dashboard in which the widget appears, or it can be commonly maintained across all dashboards in which the widget appears. Different dashboards can be available or "owned" for different users of a computer or other electronic device, such that each user can only access their own dashboard(s). A user can specify a dashboard as being available to other users, if desired. A user can also specify, for any or all of the dashboards he or she creates, whether other users are permitted to make changes to the dashboard(s). 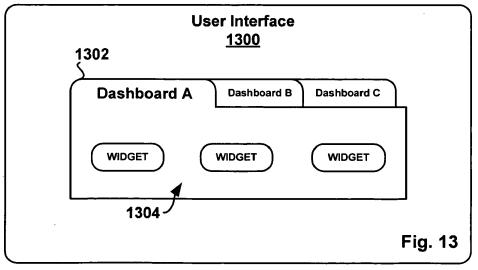 In some implementations, multiple dashboards could use a tab control scheme to organize multiple dashboards. Each dashboard includes a tab and a tab panel.  The tab is used to activate a dashboard and could be located on the top or sides of the tab control. When the tab is activated (e.g., mouse click), the tab panel corresponding to the tab is moved to the front and activated. The tab panel can include one or more enabled widgets which can be interacted with by a user, application, etc.

In some implementations, the properties of the tab control (e.g., size, location, color, font, style) can be changed by a user or programmatically by an operating system and/or application. Each tab can be labeled with an appropriate title and other information indicative of the theme or content of the dashboard (e.g., a graphical image, etc.). The tab control can be minimized and stored in a configuration bar when not in use.

Apple's obsession with "the cube" will be further extended into the world of multiple dashboards. Apple's FIG. 14, noted below, illustrates a geometric scheme for organizing multiple dashboards on a user interface. Apple states that in some implementations, a geometric object (e.g., a cube 1402) can be used to organize multiple dashboards on the user interface. For example, a cube can display a dashboard or dashboard icon or other selectable object associated with a dashboard on the front-facing side of the cube. The user can manipulate a control mechanism (e.g., a scroll bar, key, mouse over, etc.) for controlling the animation of the cube. For example, with each quarter rotation the front-facing side of the cube displays a different dashboard icon, image or other dashboard indicia that can be static or have at least some portions animated. Thus, a user can quickly review available dashboards by "spinning" the cube about one of its axes. The user can also click a flip button to rotate or spin the cube to see another dashboard. By using animated two and three-dimensional graphical objects to display dashboards (e.g., like the cube 1402), more than one dashboard can be visible to the user at a given time. 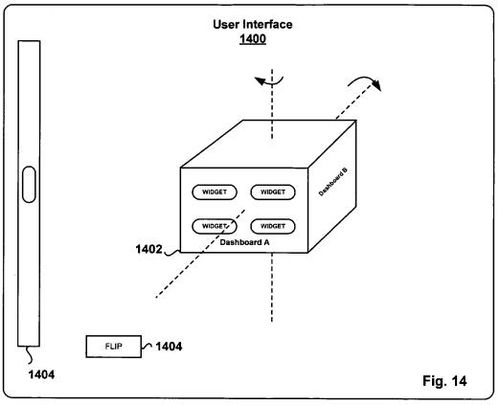 Other Dashboard Schemes: The Rolodex

Other geographic objects can be used to display dashboards (e.g., a cylinder, sphere, triangle, diamond, etc.). When the user finds a desired dashboard, the user can select the dashboard for installation, previewing or launching by clicking on the dashboard icon, image or other dashboard indicia on the front-facing side of the cube. 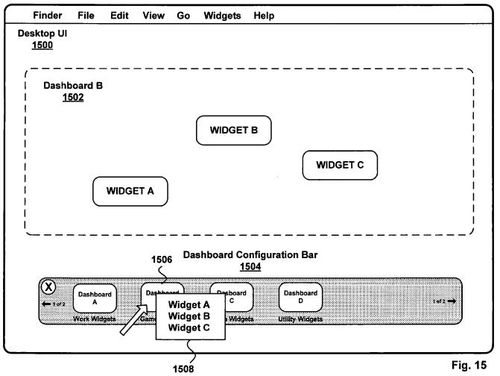